With the sun beating down on Brunton Park there’s no better time to get on with the job of preparing the playing surface as we all await news on fixture release and season start dates. 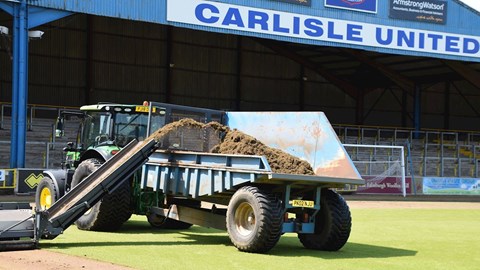 “With the work we’re doing now, eventually we’ll get round to taking about 10mm off the top of the pitch to get rid of all of the annual meadow grass that’s invaded over the last four or five years, post Storm Desmond,” he explained.

“Hopefully the majority of that will disappear, along with the dead grass build up and organic rubbish from what was a wet winter and autumn. Once we’ve got that cleaned off we’ll put somewhere in the region of 70 or 80 tonnes of sand on there, and that’s when I then come along with the Toro Procore to get millions of holes into the surface.

“I’m looking to get that done over the next few days, with it levelled off by Friday, and then I can start to seed it on Monday.”

On how much the Covid-19 outbreak has affected the work to be done on the pitch, he said: “The situation with the virus has made the way we’ve done things different this season, there’s no doubt about that.

“At the beginning of the lockdown we were still preparing and maintaining Brunton Park for the four games we had left to play, as far as we were concerned.

“The training facilities had to be looked after with the same outcome in mind, but as time went on it started to become more likely that the season was going to be called off. Without it being made official we still had to be ready just in case, which meant keeping everything playable.

CHIEF EXECUTIVE: It's work that needs to be done

“There was a point within that where I decided to start shaving the pitch down and getting it ready for renovation, rather than for games. Fortunately that turned out to be the right decision, but it has been a bit of a mish-mash because of the lack of clear guidance from the authorities.

“So, here we are doing this work at the end of June rather than at the end of May. We still don’t know when the new season will start, with some talk of it possibly being the end of August or even into September – who knows?

“All we can do is crack on, and if we can get this finished by early next week then we might just squeeze eight weeks of germination to first match into the pitch, which is probably close to the minimum you need.

“We have done it in less time in the past, but when you’re starting with nothing it’s a bit of a dangerous game. The work we’re doing now is governed by the fact that it’s growing season, and we want it to be ready by the end of August – that’s the eight-week period I’ve talked about.

“If you go beyond that you’re asking the weather to be really good in September, but if you’re still growing grass from seed at that point, and then starting to play on it, you’re asking a lot.”

“I suppose we could have left it and done nothing, but you then pay the penalty when you get into next winter, and beyond, with match postponements and things like that,” he told us. “We’ve reached the point right now where the pitch needs attention, and we have a window, so you have to get on with it.

“In hindsight we could have done the renovation in March, if we’d known that the season was definitely going to be curtailed, but without that information and clarity that everybody in football was looking for it was just a massive risk.

“If we’d stripped it down and then been told we had four games to play, with the first one coming within three weeks, it would have been disastrous for us.”