Defender Jon Mellish came through his first season in senior football with 22 appearances to his name and having made an inspired switch from central defence to central midfield, a move which helped him to trigger a clause in his contract which keeps him with the Blues until the end of next season. 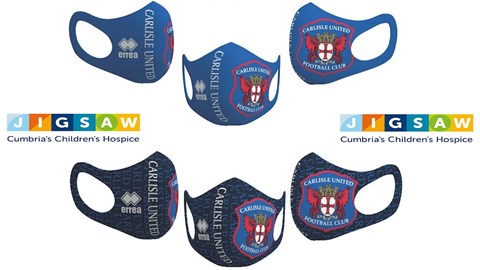 We caught up with him this week to talk about what he’s been doing through the lockdown, and what he wants from next season as the focus switches to the start of the new campaign.

Speaking first about what has been a very strange few months, he said: “It’s been a bit boring, to be fair, but I think we’re all saying that.

“There’s not much you can do in a situation like this other than stick to your training programme, so it’s been a good thing that the club has given us that.

“I’ve done a lot of runs and walks, which do pass the time, and I’ve always enjoyed doing that kind of thing anyway. When you think about it, we weren’t sure if we were coming back to finish last season off or not for quite a while, so we had to be as ready as we could be just in case we got the call.

“Being honest, that was quite hard for us, because we just wanted to know what it was that was going on. All you want to do is either get on with it or put your focus on keeping things ticking over for next season.

“Having that uncertainty hanging over us for so long was difficult but, like I say, there was nothing we could do about it other than make sure we were ready, just in case we were told that the nine games were going to be played.”

“The good thing from it was that I was feeling good, so I definitely would have been fit enough had we been told to play the remaining games,” he added. “Dave [Waldie] had us doing different things every day, from Monday to Friday each week, so the fitness levels would have been there.

“It’s been good doing my bike rides and runs along the beach at South Shields, particularly with all the sun we’ve had, so it hasn’t been too bad.

“It would still have been tough in terms of match fitness, I reckon, because it does take a little while for that to click when you’ve been away from it. You see that during pre-season, but I don’t think that would have taken too long. It’s a good group of players so I think we’d have been on top of it again once we got back together.

“Now that last season has been ended officially for us it’s all about looking forward to the next one. It has been a long time away now and all I want to be doing is training with the lads and getting ready for games again.

“It’s strange to go so long without kicking the ball around in the type of training sessions the gaffer and the coaches put on, and obviously it was starting to come together for us in the games as well. We want to continue that because the improvements were there for everybody to see.”

Having made the step up from non-league last summer he went on to establish himself in the first team squad under the new manager, importantly triggering his contract extension when the season was prematurely brought to a conclusion.

“It got easier once I started to feel settled, and playing more games helped with that. I’d have liked to have played even more, but that’s the same for every player. Nobody ever wants to be left out and that’s why you have to take your chances when they come along.

“That’s why it was good for me personally to be told that the contract was carrying on. It’s a strange time in football at the moment so knowing the gaffer wants me to stay is a boost. It means I can concentrate on what I need to do to make next season an even better one for me and the club.

“Last season we saw that there was a lot of challenges and competition for places and you have to be ready for that. When the gaffer came in just before Christmas he made it clear right away what it was he wanted from us, and we all bought into that.

“The results picked up and that’s why it was a shame for it to come to an end in the way it did. Personally I was getting a few games again, and that came for me in a completely different position to what I was used to, which was good.”

The change of position, from defence to midfield, came after an impressive hat-trick was bagged against Kendal in a midweek February reserve fixture.

“It was a bit of a surprise to be played in midfield for the reserve game,” he admitted. “I turned up ahead of the game and Louis Gray was already there. He told me I was playing centre-mid and I wasn’t sure if he was winding me up or not.

“The gaffer then spoke to me and he said that it was something different, but that he felt I’d be able to do it. I was actually quite excited by it because I do like to get on the ball and run with it, and that was the role he was asking me to play.

“I wasn’t in the team at the time so I knew it was an opportunity to show that I could add things to my game. Scoring the goals helped and I really enjoyed the experience.

“From there, we were travelling to the Crawley away game on the Friday and we were due to train at Villa. The gaffer pulled me to one side and he asked me if I’d feel comfortable if he put me in the starting eleven in the same position.

“One went really close, I actually couldn’t believe it when it missed, and the only downside from the performance was that I hadn’t taken those chances.

“The gaffer spoke to me after the game, and he’s had a couple of chats with me through the lockdown as well, and it’s a role we both see me developing and working on as we go forward. I’ll always be able to step in as a defender, but this is another option that I’m very comfortable with.

“With the way I can get up and down the pitch it means I can offer more and bring something new to the squad. I have to say that I’m not a ball playing central midfielder, you won’t see me picking defences apart with a massive range of passes, or anything like that, but I’ll cover the ground and I’ll always be available to help my team mates whether we’re in or out of possession.

“In the games I played I felt like I was helping to get the team up the pitch and into the final third. Getting into the box and trying to get on the end of things was a big part of it, and hopefully I’ll be contributing with goals and assists next season.

“The more I think about it the more annoying it is that I didn’t get a couple of goals from the games where I played in midfield. In the four games I was in that role I could probably have got five or six, and some of them were decent chances.

“I know that if I keep getting into the right areas it’ll come. It’s about staying composed and hitting the target, so that’s something I’ll be working on.

“With the way the manager has been with me, and with the way the second half of the season went, it’s given me a lot of confidence. That’s important for a player and I’m looking forward to pushing on.

“The gaffer has made it clear what he wants from me physically, and as a player, and I’m more than happy with all of it. All he wants from everyone in the squad is that we buy into what he wants us to achieve, and I really am excited about what it is we’re looking to do next season.”