In the second part of our interview with Chris Beech the manager spoke about the intricacies of planning training sessions in this new Covid-aware environment and on the ongoing work being done on the recruitment of new players for the season ahead. 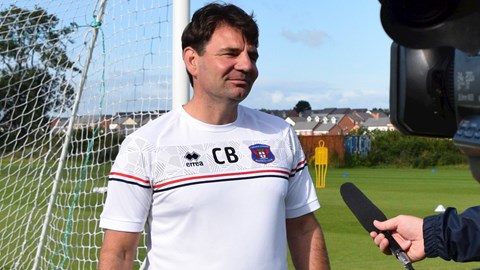 MANAGER: It's good to be back

“The stage one training sessions have been quite restrictive, but it’s been pretty easy to plan them," he explained. "It’s about how we deliver them as coaches to make sure they’re enjoyable for the players.

"Collective training is what we’re about, football is a team sport, so I will say that it’s difficult to not be able to do anything as a team at the moment.

“Nigel [Clibbens] and Gav [Skelton] have been good in making sure all of the guidelines are followed and the players get the information they need to make sure they know what they can and can’t do.

"There are a lot of complex rules, but we’ve tried to keep it as simple as we can and done our best to get it right."

"That’s why we haven’t gone out and said that the lads are back training, or anything like that, because we wanted to make sure everything was working as it should and everybody was safe," he told us.

"We’ve been training for a week already, and we could have announced that last week, but it’s really important that we get this right. We’ve got our little gazebos up here at Creighton and Chris [Brunskill] has got all his PPE on while he’s doing his physio work. He’s also done our Covid testing today [Wednesday] so we can progress to the next stage of training."

With the training structure sorted, we wondered when we might start to hear about the anticipated new arrivals.

“We’re in a good place with signings and some good news will be coming out in the next week or so," he commented. "We’re starting to get the group together but I still want more.

"We’ve spoken at length with David [Holdsworth] and the chairman to make sure we can be in a position to be a little bit stronger in terms of recruitment.

“We’ve done really well so far. It’s been difficult for players and I’ve had a lot of conversations and meetings on park benches at service stations up and down the country, just so we can stay two metres apart.

"I’ve been doing that trying to sell them the Carlisle way, but I’ve also got to recruit players who are similar minded in terms of ambition and energy.

"I want them to want to be here. I want them to represent us in what I see as the correct way. I’ve got to get that right. That's why I’ve been meeting them so I can look them in the eye and see what they’re about mentally, rather than talking about their technical attributes."

“Our budget will be pretty low in terms of the league table," he said. "When I see the likes of Salford, Bolton and Mansfield, they’re in a position where they can go and pay for what they see as the best League Two players.

"We’re not in that position, so I’ve got to be more resourceful and find a different way of trying to be competitive and beat those teams.

“If you ask any manager he would want the biggest budget, but it isn’t anything different to what I’ve been used to in my career since I finished playing. I’ve always had to be resourceful, even down to how we get equipment or where we train, never mind who we recruit.

"We’re in a great position and we’ve got great facilities for a League Two club. Recruiting players is about timing and meeting people, and I want to make sure the mentality of the group is right.

"I want to see great energy in them as a group. I know the players we’ve recruited and I’m confident they will be what we need.

"Announcements will be made very shortly on that, but I think we can build something, and I want everybody to be excited about that.

"We will need patience because it has to grow. We’ll work in a no-excuse environment and everything will be about that three-point feeling on a Saturday."

In the third part of our interview with the gaffer, on the official website on Thursday afternoon, he'll be talking about pre-season friendlies and lockdown.