With a return to contact training next week, and with the announcements of new signings imminent, it's all beginning to feel that little bit more real down at Brunton Park as we look ahead to the 20/21 season. 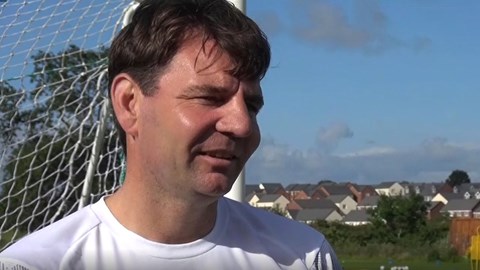 MANAGER: We're in a good place with signings

Speaking to the official website on Wednesday, manager Chris Beech said: “We signed lads on 18-month contracts in January which has been good because they’re obviously still with us and part of the group.

We’ll have news on the new signings shortly and we’ve got the core group together already. We’ve obviously got the young players that the club have committed to as well, and they’ll have to earn their stripes and get into the first team.

"I’m not going to be in a position to stomach development while we’re not winning, I need to try and connect it. All I want is the three points on a Saturday, because it really makes me feel good."

And with the form post-Christmas and pre-lockdown having seen spirits lift, he commented: “The form before lockdown was great. It was 1.6 points per game in the last ten games we played, and I think we lost five games from my 18 in charge in the league.

"I want to win more games, but that’s promotion form. Before we start flying those words around, we’ve got to recruit well and see how the group connects so that we can progress. That’s what we’ll be doing in the next few weeks as we prepare for the season."

Having already announced an away friendly with Workington, he said: “Friendlies are important to make sure we’re ready to play.

"We thought we might not be able to have a home friendly because of the timing of the pitch, but we will be playing on Brunton Park, which I think is important for the players even though there won’t be any fans allowed.

"We’re doing a lot of work on organising friendlies at the moment. We’ve just confirmed Workington and we’re speaking to other teams who will test us. I also want to try and get friendlies against teams we can recruit from.

"I’ve got connections with the likes of Fleetwood, Blackpool and Preston and we’ve approached clubs like that as well as the north east teams. We’ve got a couple pencilled in, but we’ll have to wait until those are confirmed until we can announce more."

MANAGER: We're in a good place with signings

The last four months have been strange for everyone, but for a manager going through his first summer in charge in what can only be described as a unique set of circumstances, we wondered if he'd found out anything new about the job at hand.

“I’m not sure I’ve learned anything about myself as a manager during this period because that sort of reflection isn’t really something I do," he admitted. "I know how to give fans happy birthday messages over the phone and how to present quizzes over zoom, but I’m not sure what else I’ve learned!

"I did learn that I don’t enjoy home schooling, but a thing I will definitely take away is how important spending time with the people who’ve got your back is.

"We’re very fortunate to work in football but I hope the virus has taught people to slow down a little bit and appreciate the job you do and how you do it.

“I’m about being resourceful and improving every day. During lockdown a big inspiration was seeing the team spirit they had at Wycombe. They didn’t play what you would call attractive football, but they were effective and had such a good team spirit.

"That will get challenged in the Championship, but to do what they’ve done in the way they’ve done it is remarkable really. I also love the type of football Liverpool play, but their players are ‘all in’ and that’s what I want from us this year.

"Everyone will make mistakes, but if the energy is high consistently I know that if we trip we’ll get up and go again. If you work like that, you’ve got more chance of being successful from a psychological point of view."