Defender Tom Wilson is another from the crop of under-18s who came through the system last season to earn their first professional deals. 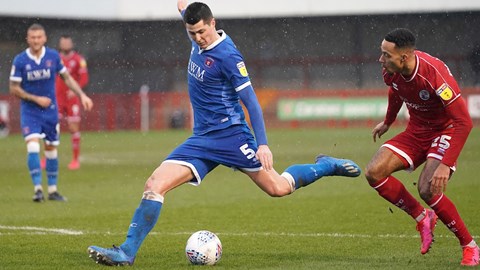 INTERVIEW: It's a role I can see developing

The Carlisle fan, who joined the academy system as an under-13, was given the news of his contract offer prior to the March lockdown, and he spoke to us this week about the moment he was given the good news.

“It was all a bit surreal, to be honest,” he said. “I couldn’t really take it in when I first found out because it’s something you’ve wanted for so long.

“All of the work you do through the years is all about making it through, so it was a massive relief when I was told I was getting it.

“Leading up to the day we were told I honestly didn’t have much of an inkling at all about which way it was going to go. I’d played in reserve games and I’d trained a lot with the first team, and as second years we’d been kept in work over Christmas to train with them as well.

“It felt like that had gone well for me but all you can really do is keep your fingers crossed that it’ll go your way.”

“My mum and dad were with me when I was told and it was a great moment for them as well,” he added. “It’s the best thank you I could give them for the amount of work they’ve put in to helping me to do this.

“I live about an hour away but they’ve driven me around whenever I needed it, without ever complaining, so it was an immense feeling for them to know that I’d got a contract.

“When we came out of the meeting I phoned my nana and grandad because they knew I was finding out what the decision was. They were under strict instructions to keep it under wraps, but they were on edge as much as I was, so it was only right to ring them.

“It still feels like it was all a bit of a blur. It was nice to hear everybody say ‘well done’ and to get the comments about all of the hard work paying off. It means a lot, particularly when it’s all you’ve been able to think about for quite a while.

“From there it’s a reminder that this is only the first part of the job done. The next focus has to be on what I need to do to push for a first team shirt. As much as that message gets repeated it is the most important one because if I switch off now, I’ll lose the opportunity I’ve been given.”

As for whether it’s all sunk in yet, he commented: “I think it will all only real sink in when we get back into training.

“All of us who have made it through will be in the first team dressing room every day, and that obviously brings a lot of responsibility with it. We can’t just turn up, we have to be at our best every day, because that’s the type of environment the manager has created.

“I think the fact that I played in the reserve games and trained with the first team last season will help with that. I learned a lot from those games because there was a lot of experienced players in the team, especially along the back four.

“You can’t help but pick up things from players like that, and the way they communicated all the time was a big thing I took from it. That definitely helped to progress my game with the youth team.

“Being in the dressing room when you’re playing Blackpool or Kendal has let us see how things are first-hand, so it possibly makes the step we’re about to make that little bit smaller. We’ve seen how high the tempo and standards are and you understand the intensity more.

“The good thing is that the gaffer has shown with Taylor [Charters] that the opportunities are there for the younger players if you step up and take them. The chance is there if you do the work, and there’s no better incentive than that.

“I suppose it’s not that common to see so many make it through when we’ve all been together from such a young age. I think I was the last one to join the group that have just made it through, when I came in as an under-13, and it does make it a bit more special.

“We all get on really well and that showed when we were out on the pitch. We all wanted each other to get through and there were plenty of smiles when we did.”

CHIEF EXECUTIVE: It's one that'll make us stand out

On what type of player we can expect to see, he said: “I’m quite a physical defender with an emphasis on defending.

“I pride myself on being a good defender first and foremost and going forward I’d like to improve on what I do when I have the ball at my feet, and on keeping things simple in that respect. Whatever work I need to do over the next year, I’ll be doing it, because I have to aim to try to get in the team.

“When it comes to goals from set pieces, I’m not exactly a prolific goal scorer, but I have had a couple this season. Hopefully I can build on that.”

And we wondered what it will mean to him the first time he gets to pull on the shirt for his first appearance for the club.

“It’s yet another cliché but it would be a dream come true,” he said. “Growing up in Cumbria it goes without saying that Carlisle United is the team that everybody looks at, so if that was to happen it would be beyond words. Hopefully it will happen.

“I’m working hard now to give myself the best chance. The club have given us a lot of work to do fitness wise so it’s been about ticking over and keeping on top of it. I’ve had a slight ankle injury, so I’ve been doing a lot of rehab on that along with the other exercises and tasks.

“Getting the college work finished took up a lot of time early on, and from there it’s all been about the season starting again. Everyone is raring to go now because it’s been so long. I can’t wait and I’m really looking forward to it.”