Having started to explain the process of helping the manager to prepare for his next opponents in the first part of his interview, club analyst Jacob Blain speaks more about the key areas of his job, and where thorough analysis can really start to help to make a difference. 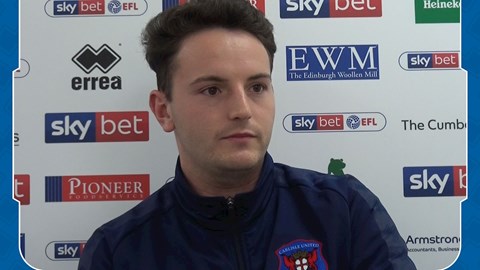 INTERVIEW: I want to do everything I can to help us to improve

“As you watch the recent games your opponents have played in certain traits do stand out,” he confirmed. “One thing that is really useful is that we’ve got WyScout, so you get a good report from them, which does help.

“The only thing I’d say is that it’s all quite ‘numbery’ so I like to trim it down and put it into my own words. I feel that makes it a bit more relatable rather than just being a big list of numbers.

“But, yes, when you watch a game you pick up on things, and if you see it again in the next game you watch it triggers in your mind, and that’s when you make a note of it. If it keeps happening it’s something you clip, and you can then show the best examples to illustrate it.

“At this level you can see things quickly; you might get a winger who crosses it a lot – Nicky Adams is a good example of that. I know that sounds really obvious but you can clip examples so that lads can see how he does it, and you can get an idea of which teams have defended it well, and how they did that.”

With that level of detail in mind it must go without saying that when the analyst picks out something which is then either implemented or prevented, it must lead to a huge sense of satisfaction?

“That is a pretty good feeling, to be fair,” he commented. “Probably the biggest one we do is set pieces, because they play quite a big part in League Two. You get a lot of goals scored and conceded from those situations, so without giving too much away we do look at areas where teams might be weak with that, and we try to exploit it.

“For example, if they have someone who perhaps isn’t aerially dominant, we might look to put someone on them, and Aaron [Hayden] got quite a bit of joy from that through the second half of the season.

“From a defensive point of view, it’s nice being a bit of a secret weapon in trying to find out if you can highlight where we might shut down some of the key players the other side has.”

“The good thing is that the first few months of this year gave me the chance to find out what it is the manager and his staff want,” he added. “When I first came into the first team environment I thought the job would be similar to what I’d been doing, but you get a real awakening as you realise that a lot more detail is required.

“Chris has been good for that because he’s kept pushing me and giving me new ideas. He’s worked with analysts before, and he knows what’s effective. Gav [Skelton] has been superb as well, and I’ve got quite a good relationship with both of them.

“We’ve kept in touch all the way through lockdown and I’m finding them really good to work with. I hear from the manager every day, to be honest, and Gav is always in touch as well. Communication is key in this job and it’s a good club from that point of view.

“On the other side of it, you can be in a position where you can rub people up the wrong way sometimes. I’ll always remember my first day here, I was analysing the Colchester away game and I think the lads must have come in and thought ‘oh great, he’s here to tell us what we’ve done wrong’ but it’s just something that’s got to be done.

“We’re all here to win games, we all want to be at the top end of the league, so anything that’s done is never personal. I help to point things out that need to be improved on, or that need to be nipped in the bud and sorted.”

INTERVIEW: We'll be announcing once everything is in place

Looking at his role in assisting with player recruitment, he said: “It’s always been my favourite part of football, even when I was young and playing on Footy Manager and things like that.

“Getting players in is the best bit, everybody loves seeing new players come in, and that’s where WyScout comes into play. It starts when either David [Holdsworth] or the manager give me a ring to ask me to get a bit of an idea on what a player is like.

“I get as many clips as I can and I send those across to them so that they can have a look, and that goes hand-in-hand with the knowledge they already have of the player. It helps them to see if the player fits with how we want to play and how we want to go forward.”

Still to be confirmed is a season start date, but there is a growing sense that football is back with the kit launch and transfer window dates the first steps already taken towards the 20/21 kick off.

“I can’t wait,” he told us. “It feels like a long time since we’ve had any football here at Brunton Park and I think we’re in a really good place.

“Once we get up and running we’ll get a few new signings in and I think everybody will be raring to go.”

So will he give us a hint as to who the new faces might be?

Click HERE to watch an interview with Jacob Blain on iFollow United now.