Speaking more about how the club has balanced the books through the four-month lockdown period, chief executive Nigel Clibbens explained how permanent losses were factored into the thought process from a very early stage. 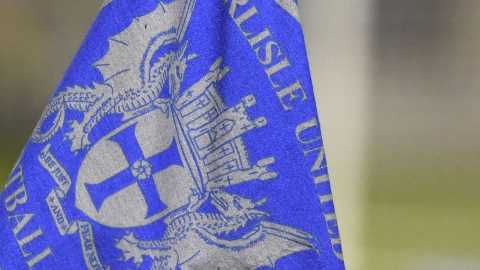 CHIEF EXEC: The furlough scheme has been an absolute lifesaver

“I’ve tried to help the fans understand the permanent gains and permanent loses we’ve made compared to the temporary loans and deferrals with all of my updates,” he said. “For instance, we got an EFL loan of £120,000, but we’ve got to pay that back over two seasons.

“We lost four home games, and we’ll never get that income back, but on the positive side we haven’t paid out the full value of the refunds to fans because of the fantastic support they’ve given us.

“A big thing, especially at our level, is that the fixtures being due to end in April meant we had no games in May, June or July. So, we had no fixtures to lose, and we plan for having very little income during those months anyway, because there’s nothing going on.

CHIEF EXEC: The guidance we're getting is changing all the time

“In terms of what we’ve actually lost from closing down, it could have been a lot worse. As dreadful as the whole situation has been across the world, for us the timing couldn’t have been much better. We got really lucky in that respect.”

“As I mentioned earlier, the furlough scheme has balanced a lot of the losses, and it’s meant we’ve been able to manage through it without needing to take any drastic action, which some other clubs have,” he commented. “As I said, we entered the whole situation with a cushion because of Jarrad’s sale to Everton, as well as other transfer fees and sell-ons that have come in as well.

“Cash wise, it’s been manageable, and we’re in a good place to then face up to what is potentially the real difficulty of the furlough scheme going away, and that not being replaced by fan income quickly enough.

“That’s where we could have a problem. If we have no furlough scheme to recover lost income and no way of getting that income because the fans still aren’t allowed in to games, then we’ll have to deal with that.

CHIEF EXEC: The fixture release date is the game changer

“A return to us getting fans through the gate compared to the furlough scheme going away is really crucial. The bigger the gap in that timing, the more problems there are.”

“If we can start getting fans back in, in sizeable numbers, before the furlough scheme ends then we can ride the storm,” he reiterated. “If there’s a gap, then there’s a big problem. It will be an even bigger problem for other clubs who haven’t had the benefit of transfer income.

“You can see that in the way clubs have been operating. It’s well known that during the close season, when there is generally no income, clubs will put season tickets and new kits on sale to get the cash in early to see them through the summer until the games start.

“Faced with that and no games to sell, some clubs have found it really difficult. Some clubs have continued to sell season tickets and have said it will be alright in the end, others haven’t.

“The circumstances at each club are very different. At the same time, at our level, our lost gate income and lost hospitality income from a match is a smaller proportion of what we get in than clubs in the Championship.

“For us, losing a game is difficult, but we’re not losing a large proportion of our income. If you’re a Championship team with 25,000 fans and you’ve got to pay refunds on their season tickets it becomes very expensive very quickly.”