United boss Chris Beech gave us his reaction to the Plymouth home defeat shortly after full time on Saturday afternoon. 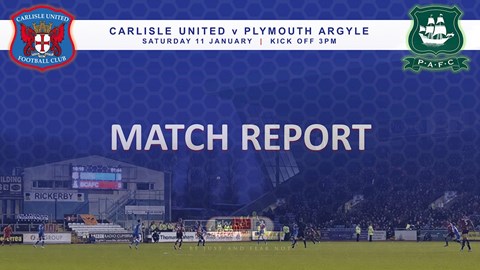 “They’re a good team, aren’t they – but you’re aware of that before coming into the game,” he said. “They use the ball very well and I’ve just said to the players that you’ve got to respect your opponents, but you haven’t got to fear them.

“I just felt like in the first half, we were in it until there was that pretty soft goal. It comes from a throw-in near the halfway line. Their player can have two or three touches, turn, play it down the line, and the cross comes too easy into our box.

“They only had one man in the box, for it to get to him isn’t conducive to winning games. We’ve got to be honest with ourselves to say it’s not good enough. We need to address it. To be fair, we have been doing that, but Plymouth are one of the top teams and we’ve now lost three games against top teams.”

“I felt like we were actually comfortable in the first 10 minutes,” he added. “Elliot Watt was getting on the football, the two centre-halves were splitting, but of course we don’t change the rhythm of that once they’ve fathomed us out.

“We had an extra man in midfield today but it wouldn’t look like it, because they’ve got great players that can travel with the football. Danny Mayor, Sarcevic, people like that who’ve been doing it for the last four or five seasons at high levels, with assists, goals and that kind of thing.

On the chances created but not taken, he commented: “There are different types of bravery, you’ve got to show bravery to get on the ball, show bravery to defend and block, but you’ve also got to get in those areas that hurt opponents.

“In the first half, I felt like we couldn’t get Harry on the ball as an attacking Number 10 as such. We changed that and he came into the game for the better coming out to the wing, but you’ve got to make right decisions and movements and players have to be bursting into the area to make sure the ball is theirs.

“It was a tough game for us but ultimately Plymouth were better and they got the points. It started badly with the first goal but to get to that point of where he’s unmarked, it was far too easy.

“It’s things we’ve been addressing to make sure we have the chance of fighting within a game and looking to try and win, but if you let that in it’s difficult. Especially in conditions like this where the first goal is important, and even more important when it’s so windy and wet. 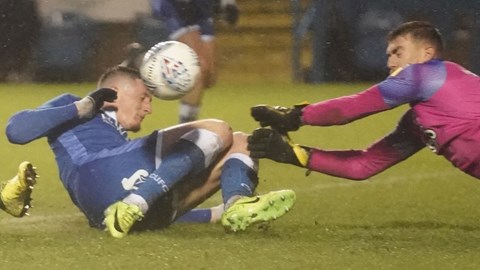 “There’s are situations where you’ve got to be really honest with yourself to think, am I doing enough, whether with the football or not. You can only answer that question yourself in the mirror.

“At the same time, you could argue the fact that when you witness it, it’s not acceptable. From the team’s perspective, amongst the team as a family in the changing room, they should have traits. We’re all different in traits that we have, like in a family, and you often fall out, but you move forwards together in certain things and elements of acceptance.

“I think some performances, some actions are not acceptable in terms of those traits. If you get them right and positive, they serve you well for a positive result. We’ve got to be mindful the opponents are good players, financed well and supported well, and we’ve got to fight the disadvantages, take those challenges on, and in theory it should want you to work and fight a little bit harder.”

And on the late red card for Aaron Hayden, he told us: “Players are going to make mistakes. He made his first one really at Crewe, on one of their goals. Today he lost his discipline a little bit. That’s right at the end, the fight’s already over, he was a bit silly.

“It’s prior to that, when you have a chance of making an impact, that’s when you want to show more discipline. It’s a different type of discipline, the ability to run down somebody and take the ball off them, take that heart and soul off them, because you’re competing continually against it, rather than falling on the floor, or doing the right thing the right way.

“That’s something that I’ve addressed looking at the team, coming in, asking and challenging them to be up the pitch further and winning the ball more in the opponent’s halves. You’ve got to show that discipline to keep doing it when it’s not on your terms. I think the players have to look at that and think we’ve had positive results when we’ve done it, so we’ve got to do it more.”

“As he was going in to make the tackle I told him not to do it,” he continued. “He said he didn’t hear me, but irrelevant of hearing me he shouldn’t have done it. He’s been very good in a short space of time, but I could see it coming, the lad picked the ball up just in front of the dugout, Aaron let him run and decided to hack him.

“I suppose the ref, he gave him really no choice, he could have half done it and probably got away with it, but it’s one of those traits and disciplines where you’ve got to stay on your feet and do a harder mile.

“Again, like we talked about the midfield untying their laces and putting themselves out of positions, Aaron often did it going too wide and too high too early, so he was often running back. At 3-0, later stages, he should be slightly deeper. He’s put himself in that position, and he’ll have to take his medicine as they say, and we’ll have to deal with it.”

“To give up the run of clean sheets we’ve had at home was really disappointing,” he concluded. “We’ve lost three games in 10 against teams that are at the top end of League Two. I know we want to be up there as well, but we’ve got so much work to do to get there. It will only be achieved by us doing a lot of hard work.

“I feel for the fans, I feel for everybody connected to the football club when a game goes that way. The players haven’t gone out to do that on purpose, they’ve gone out with a plan to implement.

“You’ve got to try and find a way to allow yourself to fight against players who are financially supported better with bigger squads. The way I am, it makes me fight harder, but not everybody is the same. I never accepted getting beat as a player, and I won’t accept it now.”