United boss Chris Beech gave us his reaction to the thrilling FA Cup third-round replay against Cardiff shortly after full-time on Wednesday night. 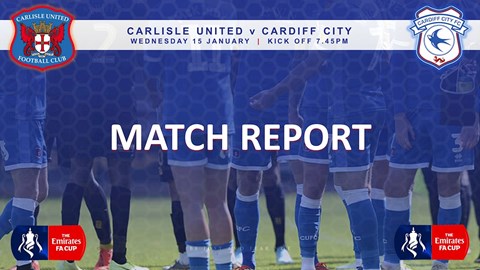 “The lads played a very big part in taking a very good Championship side to the twelfth round and we should all be proud of that,” he said. “I’m very proud of their efforts and their honest hard work.

“I did say before the game that’s what I’m looking for, I’m looking for the response to setbacks; in any working day, in any business that you have, or whatever you get up to, whether you’re a working man or woman, you do have setbacks, and how you respond to those setbacks generally determines the outcome of the day you have.

“We didn’t quite do it today but I’m very proud of their efforts. The pleasing thing is that we were on our game from the first whistle. There was a strong wind and we utilised it. We’ve had horrendous conditions for all of my four home games, but we handled it better in this one.”

Having highlighted during the week that wingers Harry McKirdy and Nathan Thomas both had the potential to be matchwinners, he commented: “I’ve been really pleased since the chat I had with Harry.

“He’s very close with Byron, and we sat down and talked about winning traits and what can help him, and he’s responded great to that. He’s an excellent football player. Like I say, he’s responded very well to me and long may it continue.

“We all know what Nathan can do. We understand some of these players can frustrate, but you’ve got to get them on point and they’ve got to want to be on point. When they are, they’re very, very good players.”

“To be fair, we got a number of good performances,” he continued. “Elliot Watt stood out, and I had a frank discussion with him at half-time on Saturday against Plymouth.

“He’s come from academy football and he was bogged down with trying to get on the ball as a four, with two centre-halves splitting, etc. I explained that you can affect these games better by playing higher, with forward passes and less touches.

“In this game he was excellent because he took that on board. I know Harry got man of the match, and Nathan was also very good, but Elliot – wow.

“We obviously want the players to repeat that every week in the league programme but it’s a completely different kettle of fish. What you’ve got to be mindful of is the efforts and psychology that went into that football match.

“They’ve got to recover in 48 hours to go to Oldham, and we’ve added to the squad, but it is relatively a small squad. I watched Blackpool-Reading last night, Reading made eight or nine changes, possibly more.

“I can’t do that, so they’ve got to make sure they’re professional and get ready to go again, because it’s vital we turn up and represent those traits. It is now a challenge for them to carry this on, and they will.

“And they have been. They really have. We’ve obviously had three league defeats in the time I’ve been here but I think they’re doing it, it’s just a case of putting it together, a case of making sure that will to win is evident in everything that they are.

“We have to be proud of the efforts, because to score five goals against Cardiff is excellent really. But to not actually benefit from it is a hard one to take, so there is still that overriding feeling of disappointment.”

And on the fantastic atmosphere created by the vibrant home and away fans, he told us: “The fans responded to what the players were doing and congratulations to everybody involved with the football club.

“Ultimately we’ve gone up against a multi-million pound company with great players, and we’ve done very well, but it’s so disappointing not to be heading to Reading.

“It’s disappointing for the fans as well. They made a lot of noise and maybe we should play Cardiff every week, because they were excellent when we played them away as well. It’s chicken or the egg, isn’t it – the lads have to do a little bit, the guys that support them … some clubs they’re very loud and vocal to start with, which creates the atmosphere.

“I understand, talking to people around town, there’s been a bit of negativity and despondency. I want the club to unite, support each other, any little mini-victory, even in failure, we are victorious in terms of how we supported each other. That can only, if we buy into it, put us in good stead for the future.”


The extended periods of lockdown and behind closed doors fixtures have left many of the club’s staff working from home, with the government furlough scheme providing a welcome financial lift for the...


The next batch of Golden Goal match day draw tickets are now on sale and we are more than half way to another sell-out already, so don’t miss out!