United boss Chris Beech gave us his reaction to the 2-1 Saturday afternoon home victory which saw the Blues do the double over Walsall. 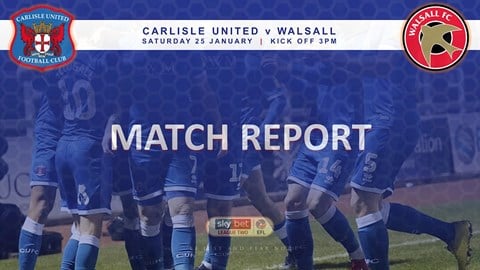 “The lads are digging in deep, working hard for each other, supporting each other and being well supported by the supporters,” he said. “That’s what happens when you do these things.

“It’s great to beat Walsall twice, home and away, and you asked me pre-game would it be the same type of game, but it was completely different. But I did remind the boys, I think it’s been a long time in the league since they’ve been two goals in front. I did suggest we were in the same position against Cardiff, and we’ve got to be so careful in the first 10 minutes in the second half.

“They did score but the response, psychologically, from that point forwards was excellent. I’d suggest the substitutes supported the starting eleven to get us through it as well. It was a proper squad effort, it wasn’t just the starters, it was everybody.

“It was good to see the players doing that and the supporters supported us to get over the line. I can’t thank them enough for that, it was great.”

With the team showing excellent discipline to keep their shape and to maintain the upper hand after that early second half goal, he commented: “The defending we did as a team, these are important moments.

“Nathan Thomas clearing a corner when it’s vital, Byron Webster getting his head in the six-yard box onto something, vital. Aaron Hayden the same. Any loose balls were cleared correctly. We had a great block on edge of the box when the ball spilled, there were three or four players wanting to get in the way and stop it going in.

“Today we got tight and that was what we weren’t doing at Oldham. If we’d done the same last week we probably could have won. We’ve got to earn from these things and it’s great that we’ve got analysis. I’ve utilised it this week showing them these situations, we didn’t have that six weeks ago, so I’m really pleased.” 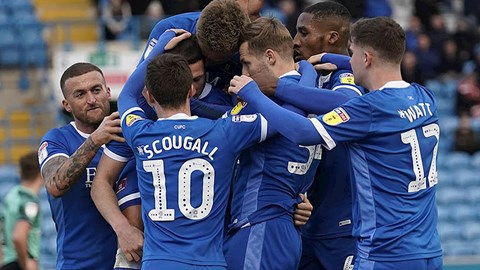 On the quality of the set piece goals which put the home side in the driving seat, he commented: “I don’t need to tell you about Elliot Watt and Nathan Thomas’s deliveries from set plays. What we need is contact to them and we got that in this game, which is what we want to see.

“I’m really happy for Ryan Loft. He was getting some stick, but we’ve got to support the lads. I support them, they do not get away with anything in terms of professional standards, but we have to, as a club, whether it’s us supporting them how they prepare, or the supporters supporting us to make sure we get something out of it.

“We’re not going to get aesthetic looking football players playing unbelievably well and scoring unbelievable goals all the time. We have to find different ways of scoring goals and that’s what we’ve got from this game.

“Both goals came at good times for us and, I’ll be honest, I can’t recall a clear-cut Walsall chance second half. I know they had a few set plays and the long throw threat, but we had our chances to add to it as well.”

And on what was another solid defensive display, he commented: “I thought our centre backs were excellent. Aaron’s heading, and Byron weighed in with some crucial headers as well.

“He showed some good composure near the end when Byron’s won the ball back and he plays the extra pass to make sure the clearance is clean. It allows us to get out of the box.

“That’s probably why Walsall’s chances were low in terms of shots at Adam Collin. We worked so hard this week on any square ball, backward dribble or pass back and on making the extra yards you need.

“That means when the ball comes in there’s big space and it makes the cross look poor. By the time he’s crossed it the lads are out, and you saw a few Walsall crosses going astray. That’s because of the defence moving, holding, moving, holding, and you’ve got to keep doing it to make it effective.”

We’ll have more reaction from Chris Beech to the Walsall victory on the official website on Sunday and Monday.