United boss Chris Beech gave us his reaction to the Emirates FA Cup third round away draw at Cardiff shortly after full time on Saturday afternoon.

MATCH REPORT: From the Crewe away game

“I’m really proud of the lads, they were excellent,” he said. “I’m proud for the football club, from the top to the bottom. The supporters in that corner were unbelievable, very vocal, supportive, right behind every tackle, header, pass, shot, goal, so pleased they’ve got something to go and hold onto after some real good, hard work, and honesty, and some unbelievable football.

“It’s good to hear the signing from the fans because we’ve got to connect and unite the football club. The players deserved that because they’ve represented themselves, their families, the football club, our values as a team and the supporters.

“The club’s united today. Carlisle United. We’ve got to represent in consistent behaviours to those traits. We’ve got to make sure we hold onto them and understand them. Often coaches, managers, players, will show a lot of negativity, how it’s not worked out, but you’ve got to understand why it’s worked out. If we can, we’ll start really making massive strides.”

Having gone into the break with a two-goal lead, he commented: “I’m still disappointed we haven’t won it. What can I say? Neil Harris is a great manager, I’ve gone against Millwall a few times and it’s a difficult place to get a result.

“I knew long throws and set plays were big factors from his days at Millwall and he’s brought them to Cardiff.

“They’ve got some big, strong, fast players, he will respect us for what we’ve done today but will 100 per cent go out to beat us in the replay. I’ve got to make sure we’re as competitive if not better to try and get a win in front of our home crowd.” 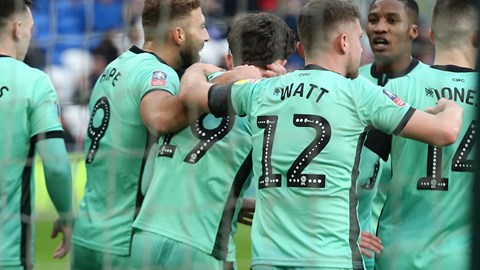 United took the lead early in the game when Jack Bridge headed home after his initial penalty had been saved by keeper Alex Smithies.

“I saw the incident, I think Cardiff were upset the penalty was given,” he said. “I’m more upset the fact if you watch it slowly, there is a leg comes out, you could argue yes and no, but definitely it’s a goal kick, not a corner, that they score off, and it’s a foul before on Aaron Hayden. That’s far worse than that penalty decision in my opinion.

“With our second goal, there was some real quality there. I think it was better from everybody. If Hallam doesn’t get first contact and do his dance, his jig, get his yard, or cross it as well as he does, there’s no goal to be had.

“If Harry McKirdy’s not prepared to run, get in the box around his man and have the composure to pick his spot, it doesn’t go in the net. It’s a team thing, the fact the whole team was further up the pitch helps us get the ball back.

“Byron [Webster] and the back four were higher, we had the midfield winning the second ball, Jack Bridge puts it in behind, everybody’s nearer each other and that’s why it happens – not just Harry, all of us.

“Somebody like Harry McKirdy has shown in the last three-and-a-half games to me, when I’ve challenged him on different aspects of football, when he stays on his feet and shows more discipline he gets the rewards, and his team does as well.

“It helps his mate Byron at the back to defend. Byron’s been excellent in my opinion since I’ve come into the club. But it’s making those connections amongst team-mates to make sure the value of what they do brings a bigger value to the team.

“Harry’s done that for me, and long may it continue. The same could be said for Nathan Thomas pressing up front, Hallam Hope continually tracking the full-back, the one at the end when he hit the post off the goal, he knew they had a man over. He ran from halfway to make sure they didn’t score.

“That is everything in winning traits. That helps us stay in the cup. The chance he missed would have helped us win it. When we get fitter, faster, stronger, we’ll hopefully get in a position where we’re doing this regularly and winning games.”

“We talk about margins, and without hard work there’s no luck to be had,” he continued. “You’ve got to stay in the fight, fight at the right time, and that’s what the lads did. They turned up from the first minute and they turned up on respect of dealing with a couple of good rounds from Cardiff.

“They got two goals back, but they responded again and to have the opportunities we had at the end to win it … from my perspective that is great growth and really good representing the football club, and the fans and players representing themselves in terms of having a real good go at a great club.”

Making his debut on the day was 19-year-old Elliot Watt, who had joined the club earlier in the week from Wolves on a half-season loan.

“He enjoyed that,” he said. “It’s far different from the under-23s and youth. He was stretching his calves off with 20 mins to go, Aaron Hayden was looking like he needed a stretcher and I’m thinking do we try and win it or make sure we go back to Carlisle.

“Harry McKirdy’s over on the far side, he’s run his absolute … body off, and he’s done great. The lads put in everything they had. Hallam Hope stretching his hamstring - the lads have gone full tilt, it’s hard to make those decisions to make sure we’re still here and still trying to win the game.

“Obviously people will look at who might be next but the next round’s Cardiff City for me. We’ve gone nowhere, just nudged it on a little bit. It’s like play your cards right, we’ve just freezed it, we haven’t won.

“I’m looking forward to it. I will, or Brandon my boy will watch the draw, but the fact remains that our next game in the cup is Cardiff.”

With the games having come thick and fast for the club over the last fortnight, he commented: “I just want to turn my phone off for about six hours now. It’s been mad, trying to recruit, but the conversations with Wolves, they’ve been fantastic.

“We haven’t stopped there, we’re trying to look at different opportunities. We’ll keep working but it’s time to have a little bit of rest. We’ve got a massive league game against Plymouth coming up and that’s the next thing in our focus.”