Defender Nick Anderton marked his first appearance in a Carlisle shirt with what was described by the coaching staff as an ‘excellent performance’ on Tuesday afternoon when he played just over an hour in a 3-0 reserve team victory against Blackpool. 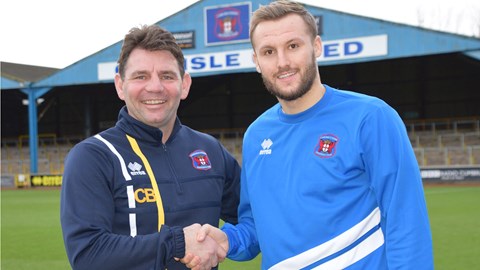 CONTRACT: Left back joins the Blues

Having been through a frustrating first half of the season with the Tangerines, where injury hampered his chances to make appearances at Bloomfield Road, he spoke this week about his delight at being given this opportunity at Brunton Park having put pen-to-paper on an 18-month deal.

Speaking first about the Blackpool reserve game, he said: “I’ve been waiting a long time to get back out on the pitch.

“It’s been a few months since I’ve played a game so it was just important for me to get my fitness and get back to doing what I’ve done for the last few years in terms of the basics of the game. I’m glad it went well and I’ve come through it injury free. My legs are a bit heavy but other than that I don’t feel too bad.”

“I put a few challenges in with full-force during like I normally would and everything felt fine,” he added. “That’s good mentally and psychologically, and hopefully now I can just build my fitness up and keep playing games.

“To be honest reserve game or whatever, I was looking forward to it. I obviously only left Blackpool last week so I knew most of the lads, and I had to put my foot in a few times. I was up for it, all you want to do as a footballer is play football, so it’s frustrating when you’re injured. I’m just glad to be back.” 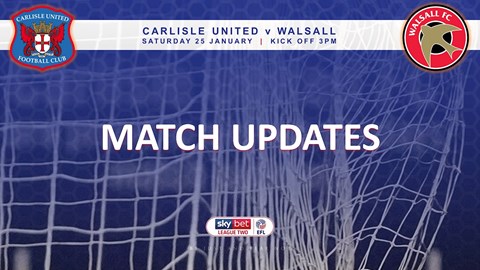 MATCH UPDATES: Hints and tips ahead of the Walsall game

Having had game time limited so far this season he admitted that it has been a frustrating spell.

“Until October I think I only played four or five games, but the season before I think I played 35 in all competitions,” he confirmed. “It’s frustrating when you go from playing at League One level then having to sit out.

“That’s how football works sometimes, but you can’t bury your head, you’ve got to keep working hard to make sure you’re ready when other opportunities come up.

“That’s why it was good to get this offer. As soon as the approach came and I spoke to the manager I knew it was a club I wanted to join. The club were interested in me, they approached Blackpool about the move, and it’s always nice to be wanted. Hopefully my injuries are in the past and I can just look forward now.

“It’s a platform for me to come in and play football, and like I said that’s all any footballer wants. The club isn’t in the best situation in the table, but it’s January, we’ve made a few new signings and a lot can happen between now and the end of the season.

“Just because we are where we are now, it doesn’t mean in 19 games time that we’ll be anywhere near it. If you put a few results together you can quickly move up four or five places, so that’s what we’ll be looking to do.”

But what is an easy decision to make to drop a division from League One and where he needs to hit the ground running from day one.

“The interest the club showed in me was good, but I still had to think about it,” he admitted. “I nearly signed for the youth team when I was 15 under Eric Kinder, and I knew Eric was still here. I know the likes of Brad Potts, Dave Symington, Mark Cullen and Jamie Devitt and they all said it would be a good move for me.

“It’s important for me that I play, but I know I’m not guaranteed that, so I need to work hard, and that’s what I’m looking forward to. I obviously played a lot of League One games last season but after my injury, which I also did when I was 19, I knew I wasn’t guaranteed a chance to play in league football.

“Luckily this chance came up and it was something that I wanted to take. I’m buzzing for it. I know nothing is easily earned and you have to work hard but that’s in my nature with the background I’ve come from. I’ll give 100% in training and in games and hopefully that will help us to be successful.” 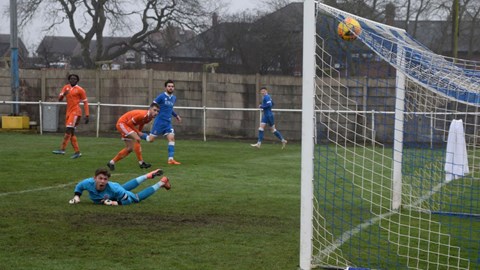 RESERVES: Report from the Blackpool away game

Having been on the bench for Saturday’s away game at Oldham, he commented: “From what I’ve seen they’re definitely up for the fight. Oldham was a scrappy game but we had a lot of chances in the second half and we looked dangerous going forward.

“We got a point away, and usually you say you want to win your home games and get draws away. A win would have obviously been better with the situation we’re in at the moment, but we’ve got a lot of games left and a lot of points to play.

“The dressing room don’t want to be in this position, and it’s good to see that when you come in because you know we’ll all work towards getting up the table. I don’t really know any of the lads personally from before, but I can see that they’ll work hard and that’s what you need to be successful.

“I can see that the lads want to get out of the situation we’re in so hopefully we’ll do it. This does feel like the fresh start I needed. I was on loan at Accrington for six months last season and did really well, then I got recalled but didn’t play week-in week-out like I wanted to. That’s football and stuff like that happens, but I’m looking forward to this new start.”

Helping to make sure that fresh start was here at Brunton Park was head coach Chris Beech, who spoke at length to the left back about his plans going forward.

“I’ve played against his teams at Rochdale a few times so he knows the kind of player I am and the kind of character I am,” he told us. “I want to win. I don’t want to be mediocre, I want to be successful. He just wants me to bring that to the table around the place.

“He knew about my injury but he has faith in me, as I do myself, that I can get back to where I was. It was good to be able to get an hour under my belt when the manager was here watching.

“I haven’t played a game since October, my last one was actually against Carlisle in the trophy, which Blackpool lost, so it wasn’t great. I’ve obviously been training, but it isn’t like a game.

“The movements and the pace of it are totally different. Reserve games are what you make them, sometimes you’ve got lads who aren’t playing so the tempo isn’t there, but I thought everybody today, especially the young lads, was excellent. I needed an intense game and that’s what it was.

“I feel like I’m ready to play now. My legs are sore but I think that’ll be the same for everyone. We’ve got a day off tomorrow [Wednesday] so I’ll see how I feel on Thursday. I know my body, so I won’t be stupid.”

On what we can expect to see on the pitch, he said: “I like to work hard and put 100% in. As a defender I want to defend first and foremost. We need to keep some clean sheets and get some points on the board to get up the table.

“I don’t mind working hard, I’ve played in non-league and had to work hard to get a move to League One, and I want to bounce back up again. I’ll give 100% if selected, I’ll throw my body on the line and I think that’s what’s needed. If a few results go our way we’ll go straight up the table.