Having added highly-rated Rotherham striker to the squad ahead of the Cardiff game on Wednesday, boss Chris Beech spoke more about what he expects from the young forward as his loan spell starts in earnest this weekend. 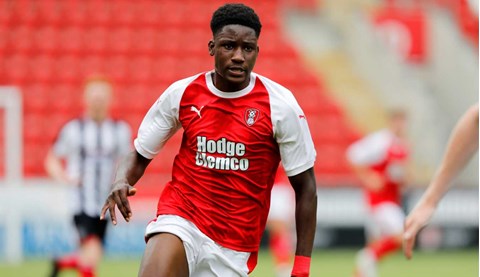 LOAN: Striker in from the Millers

“He’s going to be a frontline runner,” he said. “Hopefully he’ll be one that can run and run and run some more, getting in behind League Two defenders.

“He’s a big boy, and he’s a young boy who has grown into his body. He went to Gateshead on purpose to get bashed about, I think that was part of the loan, Rotherham’s tactic to do it.

“I think he’ll bring us some physicality, some pace, and the big one is goals.”

“He’s one of the spinning plates I’ve been dying to tell you about, which dropped in,” he continued. “He’s young, ambitious, and he’s done very well at Gateshead.

“I’ve a good relationship with Richie [Barker] at Rotherham and I knew about his possible opportunity to recruit, so we did our due diligence and we had him watched as well.

“I thank the other staff for doing that, because we’re playing football matches at the same time, we don’t have a head scout, chief scout, so youth team managers, etc, are doing above and beyond their duties to make sure they support us. That’s part of that united football club feeling.”

With loan numbers currently at six players, he explained: “No loan player wants to be in Carlisle and not playing football.

“You are allowed to take as many as you want, but you can only have five [in the matchday squad]. At the moment we’ve got a little bit of space in terms of recruitment, we’ve all been crying out for more attacking play, but we’re strengthening with the right players, ambitious players, young players.

“Max Hunt’s an ambitious man and Josh wants to come here and make a difference. I’m trying to recruit other players too. I’ve been working on both of those deals for three weeks now and, like I say, they’re the plates that spin that I can’t tell you until it’s something of fact.”


We want to see a bumper crowd here at Brunton Park on Saturday as we kick the season off against Colchester United.