INTERVIEW: We kept pushing and we made changes to support that

“You get a lot of thoughts flash through your head after a game,” he confirmed. “You end up playing every pass, header, tackle, opportunity, and you always reflect on what you could do better yourself to support the lads to do better.

“From that you look at the players, are they applying themselves to the level you ask of them. On Tuesday they did, so I have no criticism whatsoever of our team. Obviously we talked about the fact we had plenty of actions around their penalty box, and it’s turning that into goals that will make a difference for us.

“I thought Lewis Alessandra came to life, he looked sharp after his head injury, and Fela, he’s a good finisher. I’m asking him to run more, he’s started to try to run more in our training sessions.

“I told him once deadline day closed, I rang him on the Friday night, he was disappointed, he maybe would have had a couple of options, but unfortunately his club wouldn’t call him back. 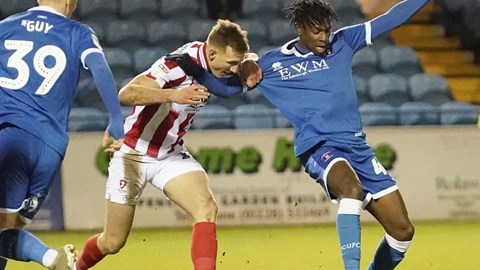 “I said we’re not dead now, Fela, let’s look at getting yourself ready as though you’re fighting AJ in a month’s time. Go for it, fitness wise, do all the right things. He’s applied himself, looks sharper in training and is running a little bit more.”

“It’s sad to think what may be with Callum [Guy],” he added. “Unfortunately that’s now three players, with Josh Kayode and Harry McKirdy, that we’ve lost in the last week.

“I’ve seen this tackle back, and I’m referring to Saturday’s game, the tackle on Harry McKirdy is an absolute disgrace. I’ve seen the slow motions and pictures of that, it was five yards in front of the referee.

“Things like that, it’s hard to stomach, because you’ve got Harry, Josh with a slight strain, and now the news that we’ll have to wait and see what’s up with Callum. For Harry it was his ankle and knee, but it’s a slight strain in his knee now and hopefully it won’t be as long as we first thought.

“For Josh, I just know that he’s young, he’s a good healer and he’s already running, which is good news considering. He’s getting top treatment at his club, and he’s possibly looking at having an injection to help speed it up. Hae wants to come back, absolutely loves playing for Carlisle, and you could see it in the goal he scored at Mansfield, he’s desperate to get back.”

“It means the squad is stretched more than we’d want, so it’s a good job we signed some players ... and we should have signed more!” he said. “Stefan Scougall was fit, he trained on Monday.

“I spoke to him, he was in the squad, I just wanted extra forwards on the bench, which it proved was probably the right decision with the way we ended up going for a goal towards the end of the game.”