United were undone by a brace from Fleetwood’s Harvey Saunders at Frenchfield Park on Tuesday and the result – coupled with the fact that Wigan beat Morecambe – meant that the Blues bowed out of this season’s Central League Cup competition at the group stages. 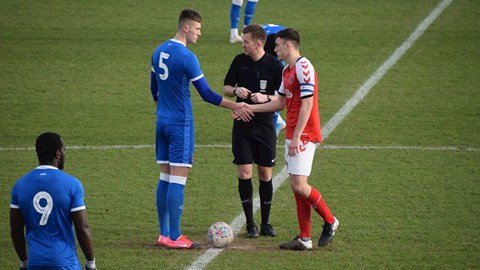 Eric Kinder gave us his thoughts after the game.

“It’s always disappointing to lose when you know if you win you qualify for the next round of a competition,” he said. “It was very competitive for a reserve game and the game itself was a lot better than some we’ve had this season.

On the difference in the game, the taking of the chances when they came along, he told us: “The lad who scored for them came from Darlington, he was touted around all over the place, Fleetwood have picked him up and he looks a talented lad.

“The centre-half is a youth team player, we played against him earlier in the season, he’s a good player. They are a club on the up, they recruit very well, have an under-23s side separate to their under-18s, and you have to give credit to Fleetwood, they’re an up and coming side.

“What I will say is that we didn’t defend very well for both goals. First goal, you could apportion a bit of blame at the right back, and say the right sided centre-back should come back and cover, and the goalkeeper should be nowhere near it. We make these mistakes and you learn from them, hopefully.” 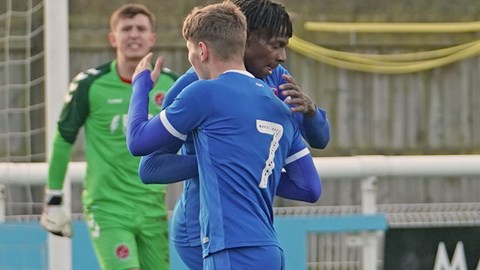 A moment of real quality came for the Blues when Omari Patrick marked his first start ina  blue shirt with a well-taken finish.

“The manager came out with a quote at half-time - why do we let rubbish goals in and score class goals?” he revealed. “Why can’t we score crappy goals and defend better? He’s right.

“Our goal was very good, he never looked like missing once he opened his body shape up, it always looked like it was going to be a goal. It was a good move and a good finish. But their two goals were disappointing.

“But I was quite impressed with Omari, he puts himself about and uses his body really well. It looks like he’s got a great work ethic, looks like one of those centre-forwards who’ll run in behind people, which you don’t get many of them these days.

“Everyone wants to come short to the ball, the skill of running in behind people seems to be going out of how centre forwards play. It looks like he’ll run in, he took his goal really well, and I’m looking forward to seeing how he develops over the coming weeks. I think it’s a good signing, something we haven’t got.”

Speaking again about the competitive nature of the encounter, he said: “A reserve game has got to be competitive and it’s only the players who can make it competitive.

“If certain players, which we’ve found at the beginning of the season, come out and don’t want to make it competitive, it makes it a long afternoon.

“I thoroughly enjoyed the game at Blackpool simply because we won 3-0, I quite enjoyed this one, even though we lost, because it was really competitive. They’re a decent team, and on the up, but I am really disappointed with the way we played defensively.

“On the plus side for me we’ve seen the emergence of some younger ones like Adam Walton and Keelan Leslie. Liam Lightfoot played at right-back and he’s a midfield player. Adam came on when Scougs got injured, and I thought they handled it well when they got into it, but it took them a bit of time.

“With Scougs at first we thought it was his hamstring, but then physio goes on and he was able to tell us that  was a knee in the back of the hamstring which caused it to tighten up.

“It’s crazy at this level to leave a first team player on the pitch, we needed to get him off as soon as he realised he couldn’t carry on. Hopefully that’ll settle down and he’ll be ok, but we won’t know until tomorrow [Wednesday].

“Fela came off late in the game but he just cramped up. To be fair to Fela that’s the best I’ve seen him for work rate, he really worked hard today, he just couldn’t see it through. If you’re cramping up, what’s the point in staying on for an extra five minutes and pulling something, you might as well just get off the pitch.”

And on hearing that Wigan had nicked top spot and progression to the next round, he said: “It’s a shame, we dominated at Morecambe and Blackpool, played against a very good Wigan side and drew, but unfortunately we just came up a bit short today.”