United had to fight back from the disappointment of conceding two early first half goals against Morecambe on Saturday afternoon, but excellent finishes from Omari Patrick [his first for the club] and Aaron Hayden tipped the balance with the home side looking the more likely from the moment they got themselves back into the game. 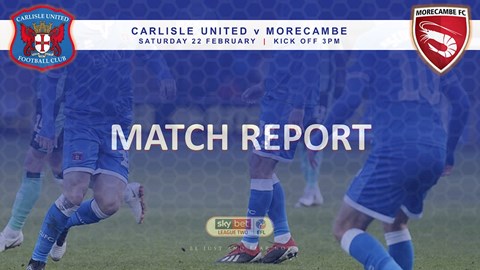 The draw extended the current good run of form to just one defeat from the last eight league games and increased the gap to bottom spot to 14 points.

“I don’t really keep stats like that, but thanks for the reminder,” head coach Chris Beech said. “The effort from the players at the moment is excellent, their energy is good, the commitment to the cause is good, and the support to that cause is good.

“As we try and break down previous barriers and make sure we move forwards, I know we’ve broken records on clean sheets, or back to back clean sheets, or whatever it was, and good results away in the league. They’re small markers to break down and it’s good we’ve done it. But I want more for the lads, the only way they’re going to get that for their efforts is to get wins.”

But having become much harder to beat since the turn of the year, he added: “I’m pleased for everybody concerned with Carlisle that we can have structure and move forwards.

“We’re in this lovely, beautiful, fickle business of football and it’s only ever judged on three points. Nobody will ever have an understanding – if you look out of that window it looks like the Irish Sea – on how you prepare for this game. The only comments you ever get are about the result of the game.

“We’ve got to be mindful of that while we work in Carlisle and the extra challenges we have in terms of preparing for games like this at this time of the year. I want to celebrate a real effort, they had great effort today. You could argue coming back, well done, but ultimately I want to win.” 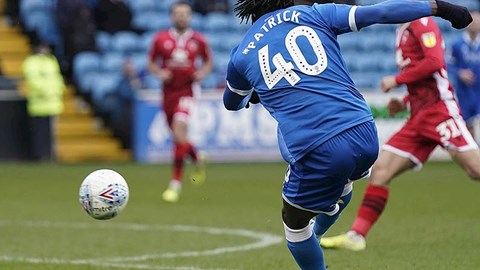 GALLERY: Images from the Morecambe game

Initial statistics showed the home side enjoyed just under 60% of the possession and the bulk of the attacking play as they worked hard to overcome the early setbacks.

“I don’t recall that there was much going on in our half,” he agreed. “Bar a couple of unforced errors we looked comfortable, and I was really confident of winning even though we were behind at half time.

“We scored a great second goal, really good, but we started piling pressure, more corners, more wide free-kicks, passing into play, made substitutions to try and support us winning the match, but we couldn’t quite do it.

“It’s always going to be difficult if you’re running a 100m race and you decide to start 20 metres behind the start line. You’re going to have to run very fast to get your gold medal. We didn’t run fast enough today on the fact we gave ourselves a disadvantage.

“Possibly the weather had something to do with the goals we let in, but I’d like to know if more goals are scored against or with the wind. It’s swirly as well, not just definitely blowing in one direction.

“Halfway through the first half it got even stronger for a period. I’m just so pleased the players have applied themselves correctly. It’s hard, the crowd start grumbling, it’s easy to jump on and criticise. In terms of having some character and some resolute behaviour, the players represented that.

“What I want from that for them is to say well done, but for them to then celebrate three points. We’re very close, and we’re hard to beat, even when we do give ourselves a disadvantage. But I want us to win.”

Speaking more about the superb response from the fans as they really got behind the players, he commented: “They were almost sucking the ball into the back of the net but it couldn’t quite happen.

“Harry [McKirdy] was getting wriggle room, Lewi Alessandra was coming alive on the left …we talk about refs again, there’s a lot of incidents that were favourable in red today, even when Harry, I don’t know how that’s a foul against him, maybe because he’s in the penalty box, I really don’t know. It would be nice to feel like you’re on the better side of those decisions once in a while.”

On the reaction inside the dressing room after the game, he said: “There is a bit of frustration, but we’ve got to take stock from the end of November to where we sit today, and have an understanding of that gap we’ve created.

“There’s been a couple of changes in staff, Nathan Rooney was here and Craig [Wight] was here, and there’s been a development of an analysis department. There’s been massive change around in players in turnover in January.

“There’s been challenges with training ground facilities. All those games over Christmas. A lot of things going on where the players and myself and support staff have worked very hard to make sure Carlisle are moving in the right direction.

“We have to continue that but it needs to be celebrated correctly. The only way, whether rightly or wrongly because they deserve it, is getting three points. At the moment we deserve three points but aren’t getting them. Let’s keep going, because we don’t know where it will go.”