Director of football David Holdsworth spoke to us this week about what has been one of the busiest January transfer periods the club has seen with something happening, either in or out, on average every other day from the second the window opened. 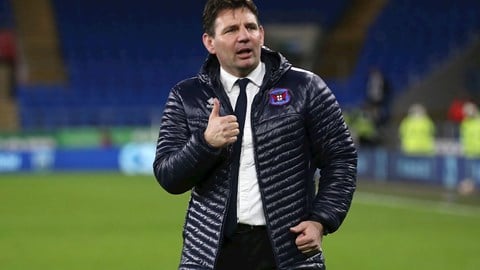 INTERVIEW: It's been a very busy month

“I’m delighted with the progress we’ve made but it’s been a long and demanding month,” he confirmed. “It’s certainly been interesting, with the twists and turns we’ve seen, but we come out of it feeling pleased, if a little bit tired.

“Mentally it’s always a punishing month when you’re involved with trying to acquire new faces, and it feels like I’ve been sat in the same chair for four weeks. Looking at what we’ve got over the line I’d say the commitment, quality and right type of character is there, so we can all feel optimistic, in my opinion.”

“Chris is talking a lot about a strategic approach to recruitment at the moment and we feel that’s something we had to do,” he added. “It’s the way forward and we feel it’s already paying dividends. He has a good analyst assisting him in his research of players [Jacob Blain] and it was clear to me that, as head coach of this club, he knew exactly what he wanted.

“He’s a coach who knows what League Two football is about and he isn’t trying to reinvent the wheel. What he’s doing is putting people out there who can dance to the right tune, and that’s vital in a division like this.”

INTERVIEW: Selection headaches are good for me

On the feedback from the fans, particularly towards the end of the month, he commented: “The thing which has pleased us all the most is that it’s given the fans a positive feeling again.

“Nobody is more unhappy than me at where we are, but I completely respect how the fans feel about it as well. They aren’t daft, they knew it had to be dealt with. It was so important that we did that because they were rightly concerned, as were we. Results weren’t going our way and the table reflected that. That’s not something to hide from, it’s to be dealt with, and we feel that’s exactly what we’ve done.

“Chris needed a bit of help in dealing with it and the board have been happy to support his wishes and to give him that. He’s connecting with the fans because of his work ethic, and because of the knowledge of the game and of this level that he’s constantly demonstrating he has on an almost daily basis. Hopefully the results will continue to come now as well.

“Nothing is ever guaranteed but we’re hoping that the longer contracts will be received as another positive sign. We want our club to be able to push on and to be as professional as it can be, but we also want to be winning football games.

“Everything we’ve done in January is with that at the forefront of our minds. We have a number of players who are now wrapped up for next season, I have options on others but, and let’s be clear, that will ultimately be up to Chris, and we’re hoping that our commitment to the players will be received well and that they’ll respond with good performances, individually and collectively.

“We’ve spent money, we’ve invested, and you’re right, it’s given our fans something to feel positive about. We wanted that and that’s why it was business worth doing.

“Our responsibility at the club is to make our fans feel happy – we don’t always achieve it, but we have to keep doing what we can. Getting players in who lift people is part of that, and that’s why we were more than happy to make that type of investment.”

As with any transfer window there are always tales and rumours about the ‘ones that got away’ with the club linked with transfer activity continually through the 31-day period.

“There were players we looked at who didn’t come, but that was all for the right reasons,” he said. “Some wanted to keep battling for places at the clubs they are currently with, and I have no problem with that at all.

“We were after some players at League One level just last week, but they didn’t want to take a step down to League Two. Again, that’s fine, they have to be in the right frame of mind if you’re going to invest in them and bring them in. All of that aside, I think our business has gone superbly well and I really am delighted.

“The boys who have come in are all top targets for Chris, and I know he’s as pleased as I am. We haven’t adopted a scattergun approach in any way. Chris looked at what he needed, identified players within that, and off we went to get them. And now they’re here.

“The start of the season was really disappointing and it had to be addressed, and helping Chris to tackle that is something I’m really pleased we’ve been able to do.”

But, apart from Jarrad Branthwaite, Hallam Hope and Keighran Kerr, had there been any other interest in our players going out, either on transfer or loan contracts?

“We have to respect the boys who are still here, and they are also still with us for the right reasons,” he told us. “If you look at Olufela Olomola, for example, he’s a great lad and he’s committed to us, and all he wants to do is score goals.

“That opportunity is there for him if he can force his way into Chris Beech’s thoughts. Nat Knight-Percival is another great professional who really wants to be playing football. He’s another who will be working hard to do just that.

“Every player who is in the building now is still part of our squad and they need to be ready to go. There are one or two who it possibly would have suited better if they’d been able to go out and do that elsewhere, but that isn’t the case. They’re here, they’re Carlisle United players and they have a job to do.

“We have a lot of belief in the players we’ve brought into this club and that’s why they’re here in the first place. Gethin [Jones] is an example of that. We offered him an 18-month deal when his first one ran out but he decided to see it through to the end of the season.

“That’s fine, we have no problem with that, because we know he loves it here. He’s reliable and consistent, but sometimes as a player you just want to concentrate on what’s in front of you.

“We have to respect the fact with him that he took a big drop from the contract he was on at Fleetwood when he came here, and there was never any doubt that he’d be seeing it through past January. He’s one who, if Chris decides it’s right, I would imagine we’ll be talking to again.”

With one window shut there is already more than an eye looking towards May, and the process of getting ready to go again for the 2020/21 campaign.

“We’re already looking towards the summer,” he confirmed. “That process started a while ago. Again, that’s all part of the strategic approach to recruitment. We know where we want this club to be and we know the type of player we need to get there.

“I have to say about all this, I am tired, but I love this job and I’m loving the challenge.”