Striker Josh Kayode joined United on-loan from Rotherham just two weeks ago, and it couldn’t have gone any better for him since as he marked his first ever senior start with a goal, and then snatched a last-gasp equaliser into the bargain at Mansfield on Saturday right in front of the away fans. 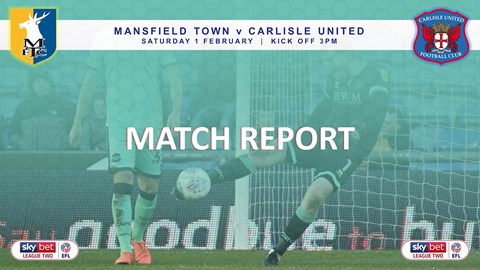 MATCH REPORT: From the away game against the Stags

When we asked him what the last fortnight has been like, he told us: “I’ve just got no words for it really, I can’t explain it.

“Obviously I came here to step up from conference north with Gateshead and I knew it was going to be really tough. It has been tough, but I wouldn’t have thought I’d have two in two right now after just three games!

“Coming here was an easy decision for me to make, but all of this has made it even better. Gateshead were going to let me go somewhere that was higher anyway, and I wanted to play in a higher league as well.

“It was a no-brainer really, and I’ve settled in really well. The lads have been unbelievable, they’ve made it easy.”

And scoring goals must have made the whole settling in thing feel much smoother as well?

“Like I say, it’s made it easier that the fans and players were so welcoming because it’s taken a little bit of pressure off my shoulders,” he told us. “I’m just happy that everybody has taken me in this way.

“It was great for me to score at Forest Green but that goal on Saturday was next level. The celebration - I think it’s 10 out of 10 limbs that, you can’t beat that can you. You can’t beat that at all, it’s unbelievable. I was going crazy as well and it’s something you just love to see.

“The delivery from Elliot was superb I think Nick Anderton dummied it. He let it go, and I was just there, bang on in the middle. It bounced off my head, I didn’t do anything, so I was just lucky really.”

With everything having happened so fast we wondered if he’d had to pinch himself to make sure that it was all real, with what has to be a bit of dream come true.

“It is, because playing in the league is what any boy wants to do,” he confirmed. “I’ve just got to keep going and keep my head down because I understand that it’s all about the next game.

“I’m just so pleased that I’ve made my league debut. It did take a while for this all to sink in, and at the game against Oldham I was a bit like, hey, I shouldn’t be playing in the football league. Because of that I know in myself that it wasn’t my best game.

“Then on the Tuesday night it was a case of, wow, I am playing in the league, so in the first 10 minutes of the FGR game I was thinking, you know what, I’m here, I might as well give it my all.

“All of a sudden it felt like I was playing with my mates and I really started enjoying it. The win there was fully deserved and if we keep playing the way we are at the moment I think we’ll be fine.

“We want to add a bit to it as well so that we can climb up the table even more. We’ve just got to stay together, keep the team spirit that we already have, and anything can happen.

“The mentality in the dressing room is unbelievable. Some of us have just got here but we don’t feel like new lads, we just feel like we’re part of the team.

“Again, that goes back to the gaffer and how the other players have made us feel welcome. For me, I’m really enjoying it and my aim is just to score as many goals as I can, help the team and play well.”

Click HERE to watch an interview with Josh Kayode on iFollow United now.