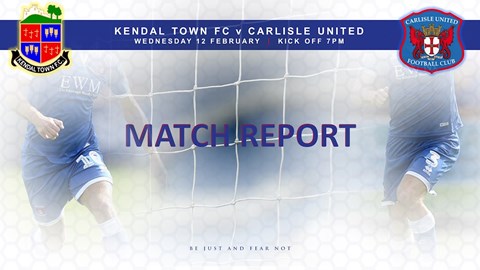 RESERVES: Report from the Kendal friendly

“It was a good workout all round,” he said. “The pros conducted themselves really well and the young lads acquitted themselves well. It was pleasing to get the 4-1 victory.

“It was fantastic to start with from Kendal to get the game on and make us as welcome as they have. We’re really pleased they put the game on for us because they did a lot behind the scenes to make it happen."

“At 1-1 they had a couple of chances and looked as if they were going to go and win the game," he commented. "We’ve spoken about that, we should have been two or three up, and you have to make the most of those opportunities.

"If you don’t that’s what can happen. Thankfully in the end we came out with a comfortable victory."

“In these games it’s important the senior players show the right mentality," he continued. "That was set by Louis Gray, his attitude all round was excellent, along with Mo Sagaf, Jon Mellish and Nat Knight-Percival.

"They can be difficult nights for senior pros at times, even though it’s a game of football. They’re disappointed they didn’t play last night [against Cheltenham] and you have to make sure they’re in the right frame of mind.

"If they are it rubs off on the young lads and credit to them for that. The young lads fed off that and performed well.”

“We created a lot of chances, without that final pass or bit of quality to work the keeper,” he agreed. “Apart from the goal and a one-on-one in the first half, we got into good areas, but I don’t think we made Morgan [Bacon] make many saves.

"In the second half, for the first 20-25 minutes we made him make one excellent save, which got lots of oohs and aahs, but they don’t get you goals, they only work the keeper, and thankfully we put that right in the end.”

Jon Mellish, who played in a central midfield role, bagged himself the perfect hat-trick on the night, and Skelton joked: “He’s just getting the ball signed in the dressing room now!

"I don’t know if he can claim the header, Morgan maybe should have done slightly better, but it’s a new position for him, a new challenge, and he got about the park, he was competitive and got his three goals from getting into attacking areas.

“We’ve spoken about playing Jon in that role before and the manager has done it before where you look at people. Someone with different eyes might not put him in there, someone else might play him there, it's just how people see things.

"It was a test for him, but his attitude was brilliant. He was quite pleased about playing in there, and he did ok.”

On trialist Callum Harris, he added: “He had good ability, technique, and he’s one we’ll continue to look at closely – we’ve potentially got another game next week, or the week after – and in training.

"On a difficult pitch and a difficult night he acquitted himself and showed he had good technique and ability.”

“Games are always better than training,” he concluded. “It gets the young lads ready, I know it sounds silly, but it prepares them for night games.

"It’s a different challenge, how you prepare, they’ve been at college today, and they’ve got to think about when to eat and how to prepare.

"It isn’t just a good test on a pitch like that against a competitive side playing in a good spirit, but the whole preparation side will aid their development as well.”