Another good performance on Saturday afternoon received a positive response from the fans as United pushed table-toppers Swindon all the way despite awful weather conditions. 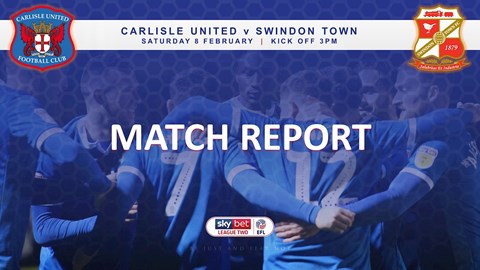 Speaking about the arrival of a more upbeat attitude game after full time, head coach Chris Beech said: “My dad has always said that your actions speak far louder than your words.

“There’s a lot of people who have a lot of things to say, back in the day and nowadays, so it’s about what you do and how you do it. That’s why I’m really pleased with how we defended, competed and in the way we tried to take on a free-scoring front line with a Swindon Town budget and facility, and really feel a little bit hard done by that we haven’t won the game.

“I’m really pleased that our fans are responding to what we’re doing, but people want and people will respect hard work. It’s the first thing I said when I came into the building, but whether you get what you deserve or not, as in the three points, people want to see that you’re trying to get them.

“Obviously we work in football so you’re judged on three points, so there can only be so much timeline to hard work, effort and endeavour if you aren’t ultimately winning. When you mix those qualities in with three points, or with what we showed today, the people of Carlisle will support that, so I’m really pleased and proud that we’re changing some opinions.”

And on the game itself, in which Carlisle created the better of the chances, he commented: “I think we possibly should have won that game, I really do.

“The chances we had, the keeper even spilled one at the end there and it didn’t drop our way. That can quite easily drop to one of the lads, but it didn’t.

“I think Colls [Adam Collin] made one really outstanding save, and the one he saved from Doyle in the second half is one he should stop, with it being a shot from 25 yards, or something like that.

“I can’t recall too many actions from Swindon players, so it’s well done to Byron [Webster], Aaron [Hayden] and the full backs who supported them by defending, squeezing and doing it repeatedly. They keep doing things like that sometimes when it’s not credited.

“We’re looking more solid defensively and that’s down to hard work and the attributes I’ve just spoken about. And I think that’s why you’re talking about some sort of change of attitude towards the football club. 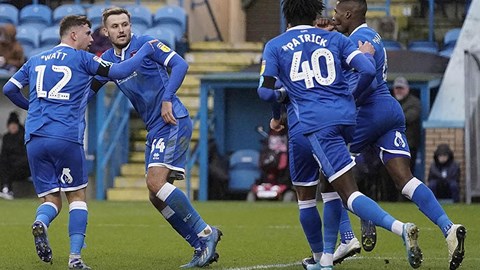 “I’m just a normal lad, a simple lad who gives everything he possibly can to the opportunities he gets. That’s what I did as a player, and I was told at 14 that I wasn’t going to make it as a football player, and that was from a fairly established coach at the time.

“I worked very hard to make sure I became as successful as I could as a player, and I’ll do exactly the same as a coach, which I have done for the last 16 years. I’ve done some hard miles as a young coach and now I’ve got an opportunity to make sure the traits represented by myself and my family are represented by the lads, and that it represents the Carlisle people.”

And with the traits being talked about leading to an unbeaten run of five games, he told us: “Yeah … but I just want to win. I want to beat Swindon instead of drawing with them, because we should have beat them. I’m disappointed.

“That’s why there’s disappointment with the way we conceded. It was a free header – not the goal going in, but the header back across goal I’m more disappointed with, because they’re easier to defend.

“Sometimes it’s hard to get second contact and it’s actually easier to get first, because you generally know where it’s coming off the corner taker. When all the heads go left and it gets headed back, I understand sometimes it gives some serial operators in the box a chance to get half a yard.

“It was that phase which disappointed me more than what went on. But I was really pleased with our quality for our goal and it was a great header from Aaron. He got man-of-the-match, but both of the centre halves were excellent.

“When we got the ball down and passed it Nathan Thomas got involved, but we still want more. We still need to find that pass to give our game changing players ammunition to take people on.

“It’s so difficult to do it, though, when you’re playing in that wind. I need people to understand just how hard that is. It’d be lovely to have a Saturday that was nice. Yesterday [Friday] was beautiful in Carlisle, and I got excited that we’d have a game on the pitch with no wind or rain and with a bit of sunshine. Just like last Saturday match day was horrendous, and it makes it harder to play the way you want to.”

The manager had spoken about the importance of set pieces at both ends having spent last Wednesday at St George’s Park at a CPD event.

“Yeah, we talked about what Gareth Southgate had said at the press conference and I just thought you guys would get on me when we conceded one – ‘hasn’t done you any good talking to him, Chris, we’ve just let one in.’

“It’s something we were working on anyway. What they talk about at that level is exactly what we try to do, by the way, minus the terminology. There’s nothing too much complex going on anywhere other than a couple of teams that really get it rocking.

“When you can have and pay for the best players and utilise the squad with players behind them who are also some of the best players, that’s great to have. Swindon’s bench is so strong, and as ours gets stronger we’ll have more options. They had players they’ve paid a lot of money for on that bench, and it can be tough to compete against, but we did.”

“What we’re doing isn’t hidden in any way, I want us on the front foot and attacking as much as we can,” he added. “The opposition can’t score if you’re in their half. I was disappointed with my midfield in the first 30 minutes actually that we weren’t doing that more.

“We had the wind behind us and, I mean, how many times have you seen Colls kick it and their keeper catch it after one bounce. You’ve probably not seen that since he was 21. He almost scored off one, didn’t he, and that’s how strong it was.

“When we did get it down and pass it Mike Jones was turning, Elliot was on the edge of the box and sliding Lewis through with the great little jinky skills he’s got. It was a quiet first half for Nathan, and for Harry really, so I felt a bit sorry for him and it was a shame that he had to come off, because I felt as though he would get more opportunity to create against the wind.”

Elaborating more on the nature of the injury which saw McKirdy leave the field just before the break, he said: “He just got a bad tackle. Granty [Anthony Grant] knows what he’s doing and it’s something I used to do.

“It’s nothing bad, it’s in the laws of the game, but he’s slightly lifted his leg and he’s caught him just above his ankle high shin pads, so maybe he needs bigger shin pads and it’s his own fault for not having bigger ones.

“But the ref’s got to protect players like that. I had to try to give him the chance to play on and I know the supporters were like ‘get him off’ but it was so close to half time and I was trying to get there to give him 15 minutes, so we could see where we were with him.

“It’s almost like a boxer between rounds where you want to see if he can go again. There was just one incident that frightened me before half time where he couldn’t get back and Swindon crossed it. I thought, I can’t take the risk, even though half time was so close.”

“Of course that gave Omari [Patrick] his debut and I thought he did really well in the half that was harder from a forward’s perspective,” he said. “It’s hard for the ball to reach Omari in those conditions, but when we did break the line he was a very willing runner.

“He got contact, he made things happen and it’s a shame he didn’t get his chance at goal. He showed us that he has abilities we can work with.

“Again, it’s a shame that Josh Kayode wasn’t available. He had a problem in the game last Saturday and he’s a young boy who doesn’t know his body as well as an older player does.

“He said at half time [at Mansfield] that he could feel something in the back of his leg, so I looked the lad in the eye and I said, ‘Josh, are you coming off? Do you want to come off?’

“He said ‘no, I’m ok gaffer, it’s just tight.’ He tried to stop a full back playing a ball down the line and it tightened up a little bit. I said to him that I wanted no risks, he was coming off, but he insisted he wanted to stay on.

“I’m glad he did because he scored that great goal. He didn’t look in any way that he was holding back in that second half at Mansfield, he was after everything. In the early part of last week his leg didn’t respond well so he went for a scan and he might miss a little bit of football.”