Youth boss Eric Kinder gave us his reaction to what was a classic ‘game of two halves’ against Shrewsbury Town at Creighton on Friday afternoon. 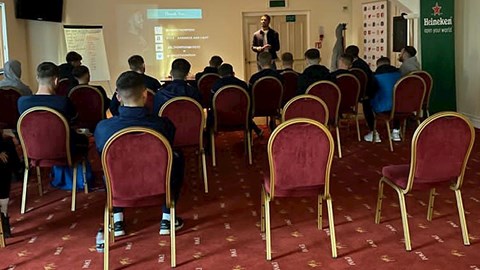 “The way we felt at half time was a mile apart from where we felt at full time,” he said. “If we had a scale on it we went from zero to ten in terms of how we played.

“Our first 45 minutes looked like the after-effects of Tuesday night had kicked in. We didn’t compete at all before the break and I just felt we needed to be quicker in everything we did.

“We gave away a poor goal and then we had the sending off, so it was all stacked against us. Elliott Day doesn’t need telling about his red card, it was a stupid tackle to make when you’ve already been shown a yellow.

“It doesn’t matter how the first one was given, or even if you think it should have been shown in the first place, because he could actually have been given a straight red for that tackle. We’ve no complaints about that, and he doesn’t need me to tell him he got that one wrong, he knows that himself.”

With the one-man disadvantage and a goal to claw back, it was never going to be easy for the young Blues as they came out for that second period.

“Even with one man down the performance was chalk and cheese,” he told us. “Having said that, Adam Walton and Sam Fishburn had good chances to score in the first half, so it could have been different.

“With the way it had gone we didn’t expect to get anything from it, but credit to the lads for the way they responded. We dominated the half, we pushed forward and we played some very good football. 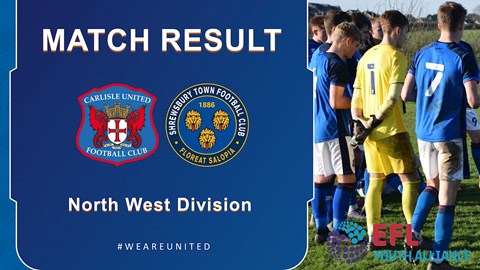 “There were two one-on-ones where we made the wrong decisions, we missed an early penalty and it ended up taking us until the sixth minute of time added on to get an equaliser.

“When you look back it’s been a hectic week but that was two points we definitely threw away on Friday.

“Being honest, with the missed chances and not scoring from the penalty I did think that it just wasn’t going to be our day.

“With the injury situation we didn’t have a full bench, and young Dan Hill came on as an under-16 and, to be fair, he really impressed me. He’s been very quiet when he’s come on in past games, but it looked like he felt that he could do something about it when he got on.

“He set up the goal that was disallowed - and it was rightly disallowed because it had gone for a throw during the build-up. It was the fact it took the assistant referee until our lads were celebrating before he raised his flag that caused the chaos and confusion with the players from both teams.

“It was one of those days that if you’d put both linesmen and the referee together you wouldn’t have got one good official. They made a very easy game between two competitive sides very difficult, and it didn’t need to be.”

Speaking more about the positive response to a tough situation to be faced through the second 45 minutes, he commented: “That all came from what Mark Birch said to them. Of all the time I’ve known Mark that’s the angriest I’ve ever seen him.

“I actually didn’t need to say anything, he’d covered everything and they were left with a clear message of what we’d thought about how they’d gone about their work.

“It’s usually me who does that, but he’d already done it exceptionally well. Like I say, the response from that was immediate and Shrewsbury never really got a sniff in the second half at all.

“We should have scored at least three or four goals, we didn’t, we had to wait for that one in added time, but it was good to get something out of the game because we deserved it.”

This coming Friday brings the long trip to Walsall and the final game of the fixture schedule before the Christmas break.

“It’ll be a really thin squad because Elliott will be suspended and we have the three long-term injuries with Dylan Garvey, Roan Steele and Ryan Swailes.

“With it being on a Friday it’ll mean we’ll struggle to get any of the under-16s out of school, so the bench will be made up of two subs who are both goalkeepers.

“We have to get on with it, it’s the last game of 2020, and we’ll have ended what has been a very strange year in a good position. There are a few regrets because we could be in an even better position, but that’s life in this game.

“You drop points and pick them up when you shouldn’t. So, we’ll go to Walsall, we’ll get that done, and we’ll see what the New Year brings.”


United's under-18 team have a tough pre-season ahead with them scheduled to face four Category 1 outfits.