Having missed out through suspension last week, manager Chris Beech confirmed that Callum Guy has had the time he needed to shake off the heavy fall which saw him leave the pitch early in the last home game against Salford. 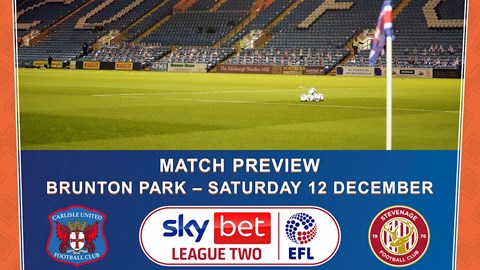 “Callum is good, so he’ll pose a different type of question in terms of who plays and who doesn’t,” the manager told us. “He’s added to our options, which I’m really pleased about, because he’s been a dominant midfield player for us.

“The whole point of having a close-knit group is that they all support each other, whoever is selected, and it certainly isn’t anything against anyone if they don’t get a starting shirt.

“It’s simply us looking at what we think is best for us in terms of how we go up against each opponent as we look to gain our three points.”

And with Brennan Dickenson working hard in the background to keep his rehab process chugging along, he said: “I know he has a game in mind that he feels he’ll be back for but, at the same point, he’s only completed two or three weeks of pre-season and then missed the rest of what we’ve been doing.

“We’ll have to be a little bit careful with him but, when he is ready, we’ll have an exciting, powerful attacker added to the ranks and that’s something we can all look forward to.

“There’s a chance he could be back by the end of the year, but I wouldn’t be definite about that. It depends on how he progresses through each stage and we need to know that he’s able to get up to full speed repeatedly, and within that we can monitor if there’s any reaction.

“He then needs to start playing football, and we’ll see if there’s any reaction to that, so there’s a little way to go for him just yet.”

And on Preston loanee Ethan Walker, who returned to his parent club for treatment to a shoulder injury, he explained: “He had a bolt in his shoulder, and apparently that’s good news, because it means that it won’t pop out again unless it’s an horrific situation.

“He’s back running, and running well, and he’s constantly in contact with us. He’s keen to show his face again, which is exactly what you want from a player, and it’s good that he’s progressing.

“Ethan is a good lad and he’d only just started to get going for us before that injury, so it’s a case of watch this space.”

With the long-term injured looking like they’ll be adding more selection problems, particularly around the New Year period, we wondered if there was anything else the boss wanted for Christmas.

“Tier 1, then we can have 4,000 people on the stadium,” he replied. “People are stopping me in the street to talk about how excited they are, and just imagine what Boxing Day would be like if everybody was allowed to come. It’d be packed.

“Hopefully we can all behave ourselves and the numbers allowed to come will go up, because we just want everybody who wants to be here to be here.”