United’s victory on Saturday saw them register three wins in a row for the second occasion this season with the three points taking them into the automatic promotion places for the first time since September.

Speaking shortly after full time about the manner of the win, manager Chris Beech said: “We’ve scored three goals a number of times, but we’ve not had a clear, convincing victory within our performance, even when the performance has warranted it.

Having taken the lead with just 10 minutes on the clock, it then became a procession of chances as the Blues looked to turn the screw at every opportunity.

“The way we didn’t take our foot off the gas was another good aspect from the day,” he told us. “I didn’t want the opposition to feel comfortable.

“I said to the lads at half time that if you play for Stevenage, you have a long journey back and even though this doesn’t sound quite right, but in professional football you try and control defeats.

“If you can keep the scoreline as it is, or get a goal or two yourself, the result is almost acceptable. I wanted us to keep pushing as I felt there were more goals for us.

“The keeper pulled off some great saves, we missed some chances, but it was one of those games I felt we could get that six or seven I’ve been talking about. But 4-0 at home is still very good.” 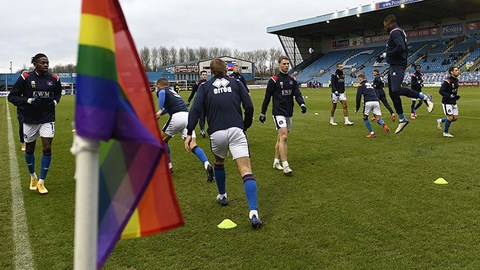 GALLERY: The Stevenage win in pictures

Added to that ruthless edge was a sixth clean sheet of the campaign.

“That’s something the lads enjoy as a group,” he confirmed. “The defenders obviously enjoy it and it’s a team thing as well.

“I’m pleased for everybody because they work really hard. You could see – Joshua Kayode, that’s the most I’ve seen him off-the-ball running to get the ball. It’s no surprise that coincides with a thunderous header to score his goal, because it’s part of how he’s feeling and going about his work.

“That’s the levels you need to get to if you want to be a regular and consistent threat. JJ’s done great, as have the other players.

“You could see Omari Patrick getting back when the defender got the better of him on the odd occasion, making sure they couldn’t go down that line putting us under pressure.

“Nick Anderton’s on the front foot, what a captain’s performance that was. Brilliant. He set the tone today for me, scored a great goal, we’ve worked on that in training, so he’s got his reward for doing things correctly on a Friday. 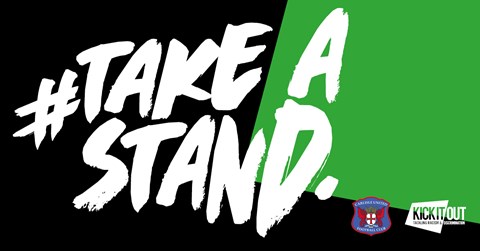 KICK IT OUT: United pledge support for 'Take A Stand' campaign

“I’m pleased that Joe Riley scored as well, because he’s been getting closer, and he’s been patient, getting left out of the team. Nick Anderton normally goes in the box, I told him not to and Joe goes in and scores instead. These things happen some days.”

The opening goal of the day was another example of good work done out on the training ground.

“It feels great when something you’ve worked on comes off,” he said. “The corner was the same. We’ve got a bit of variation going on now, opponents don’t quite know what we’re doing.

“Several different things can come off from what the lads have worked on, and we’ll always be happy when that’s the case.

“What we keep reminding ourselves is that we can’t take anything for granted. Things can change quite quickly. We don’t know the severity of George Tanner’s last minute shoulder injury, what will happen with that.

“That’s why we need to make sure we enjoy evenings like this As a Carlisle fan now, they’ll be sat at home having a beer and enjoying themselves. I want them to enjoy themselves while we look to feel pride in our performance, but we have to eat, sleep, rest, not rave, and repeat, because we’ve got Mansfield on Tuesday.”

From the recent excellent run of form, which has taken the team into the automatic places, a visible air of confidence has developed with the players taking control of things from the very first whistle.

“The ‘C’ word, it’s nice to talk about confidence instead of coronavirus,” he commented. “It was good to see.

“I think Nick set the tone as captain today, his first header, tackle, he was right up for that. People followed. Brilliant – they’re doing what we’re asking as staff for the lads to do and it’s great they support each other.

“Now we just want to keep it going. Eight wins from nine league home games, yes, excellent, but I’m still mad at that penalty Cheltenham got, because Jon Mellish was fouled before it. We could be talking about no defeats in nine, but we’re still doing ok.”