United’s victory on Tuesday night took their current run to four consecutive wins, with three of those victories complemented by clean sheets. 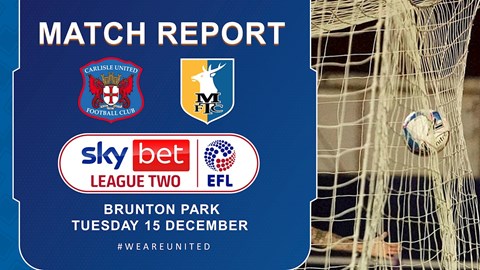 Now sat in second spot, with eight of the nine league home games so far this season having also been victories, we spoke to manager Chris Beech about what had been another good, solid performance.

“The run is good, isn’t it,” he said. “I’m really proud of the performance from the lads. You can’t always get quite what you want, and even though I thought we were good in the first half, we weren’t very good.

“What was pleasing was we talked about how Jack [Armer] would play the role of right back differently to George [Tanner] and we’d have different things come off it.

“Jack set the goal up by coming on the inside and putting a lovely cross in. Omari’s touch and finish is good enough to beat any team. I’m really pleased with that.”

“There are different types of performances,” he continued. “Mansfield have major finance with strengths to back up their starting eleven. They brought on people to try and do that, and I thought one might drop to Cook in the end, but Jon Mellish did well to clean it up.

“You’ve got to do these things. Hard work is the first thing you should always bring to work, then a little bit of quality. The quality of the touch and finish for the goal was of the highest standard tonight.” 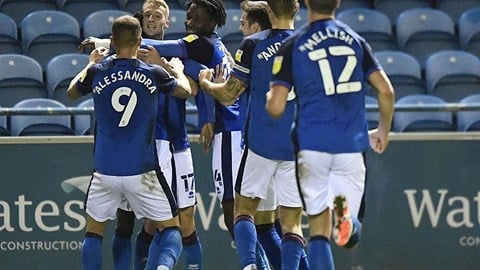 Yet again the shut-out was achieved by hard work which saw the team reduce the visitors to just one shot on target.

“I think Paul [Farman] tipped one effort over the bar and I don’t think that was a shot, it was a cross,” he commented. “He was alert to it. He was gutted to get a booking because he didn’t hear the ref blow the whistle to take the kick, he hadn’t actually spotted the ball by that point.

“It was amazing that Mansfield could take a lot of time with every dead ball in the first half, but we did it once and got booked. That really miffs me because it wasn’t warranted, but it happens.

“We didn’t get a lot of decisions. I think it was after 34 minutes of the first half that we got a decision where it was a bit of a 50/50. At half time, I always listen to the players first and see what their mood is, and they were agitated with those decisions.

“I told them they were in a position of strength after scoring a quality goal, so they had to try to not do anything daft to support a bad decision. It’s difficult for referees, I know it’s easy to stand here and criticise.

“I know it’s difficult, but I was speaking to the fourth official and all I was asking for was fairness. Ultimately, it does matter, but it doesn’t matter because we managed to beat everybody that was out there tonight.

“I was very happy with the standard of the performance because Mansfield are a good team. They’d lost the same amount of games as us before tonight so it just happened to go that way for us.

“I wish we could have got another goal, but we didn’t, but we made sure they didn’t get one, which is really good.”

With the players looking confident every time they step onto the pitch, he told us: “They do, and long may it continue.

“We all know that without hard work and honesty it won’t carry on, so we have to remain with our traits, which start from that point.

“We’ve had some challenges along the way with injuries and the like, but with the culture and environment we have in the changing room I think the players are confident of bridging gaps, and they did that again with Mansfield.

“The lads are staking a claim for their own rights to become what they can become because, let’s be right, the lads who started the season took a few games to get into their stride.

“For Jack Armer to get in his stride straight away, I’m so pleased for him, and this is why it takes strong decisions in the past like playing him against Hayes, because it takes away that factor tonight with having played him in the FA Cup.

“If I don’t take a risk on a young player he never gets an opportunity, it was just the right thing to do.”

“Overall I’m just pleased that we’re able to report on another hard and honest performance,” he concluded. “It wasn’t quite as slick as Salford or Stevenage but it still had some great moments in it.

“The goal comes from Jack picking out a pass with vision, and not just crossing blind, and the finish was superb.

“We defended brilliantly despite the decisions going against us that we talked about and I’m really proud of the players for that. We defended and attacked as a team and it’s just a shame we didn’t get the second goal.

“Football is about winning and I like to play fast, attacking football that creates chances and goals. I want my players to enjoy themselves, it’s pretty simple really, and I think the lads are following that at the moment.

“The fans are enjoying it and I thank everybody for their support of what we’re doing.”