It’s a return to the place where it all started for Chris Beech just over a year ago as he goes up against former team mate Mark Cooper and Forest Green at the New Lawn on Saturday afternoon. 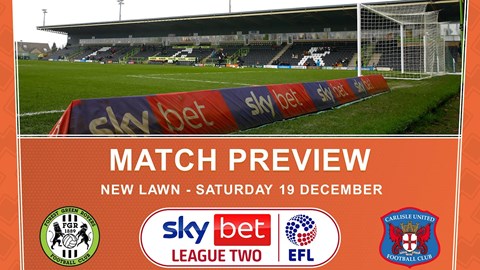 Speaking about what he expects to see from the game, he said: “They play very good football and I know they’ll work hard.

“I played with Mark Cooper at Hartlepool, we were midfield partners, so I know him very well. He’s a winner and he’s done very well with his recruitment.

“I think he’s financially backed and that’s enabled him to recruit a very good squad, on top of the lads he had last season who were doing very well anyway.

“It will be a tough game. We enjoyed ourselves against them a couple of times last season but that’s irrelevant, it’s a brand-new team.

“I know a lot of their players and I spoke to a few in the summer. We’ll look forward to the challenge of playing against a team who are very possession based and they’re doing very well. It should be a very good game.”

Asking about the four meetings between the teams last season, he commented: “I think stats like that are completely irrelevant.

“It’s two new teams playing each other. They’ve got a really good squad and they’re well financed. Brandon told me to look at their bench before our game tonight, but I was trying to concentrate on Mansfield, so we’ll look at that this week.

“A lot has happened since I took charge of my first game there. Just think about that afternoon, when the club captain who has legend status drops the ball into his net, a mistake he’s never made before in his life, but it happens to me and I’m thinking, what’s going on.

And the New Lawn will welcome, fans making it the first time since Cambridge last February that the Blues have played in front of fans at an away venue.

“That’s something to look forward to because atmosphere of any kind is great,” he said. “We might not get what we want, but it’s great to have people in there who can help to make the game what it should be.

“We’ve had a run of good games, we’ve rested and we’ve prepared in the right way. I’m sure we’ll be right at it.”