Midfielder Danny Devine made his first league start for the Blues on Wednesday night when he picked up the InvestAcc man of the match award for his part in the 2-1 win over Salford. 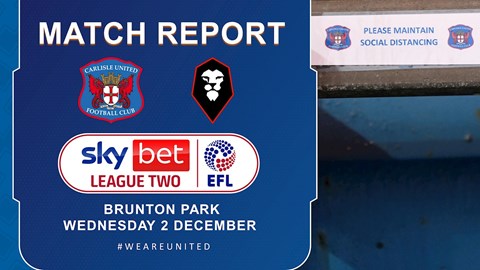 And, of course, it was the first time in what felt like forever that fans were allowed back into the stadium to witness what was an excellent team display, and a top drawer individual performance from Devine.

Speaking after the game, he said: “It meant a lot to us to do that in front of the fans.

“It’s obviously the first game back since March, apart from the test game against Southend, and it was great to have them here. In a game like that where you concede late on, the fans help push us over the line.

“It will be great to have them in regularly, at home games at least, because as players we thrive off that. When you need that extra 5% they can cheer you on and get you going again.

“Their support gives you that extra boost or the extra confidence that you need when you’re going into the next tackle or playing the next pass.

“It was really nice to hear the fans inside the stadium. It felt like they played their part in helping us and, even though we conceded the goal, they made sure they got us over the line.

“Sharing things like that with them is what it’s all about. It’s been hard for them with not being able to come to the games so it was really nice to have them back and be able to get the three points for them.”

And on that man of the match award, he told us: “It’s obviously nice on a personal note to get the award but the main thing is the three points for the team.

“We’re happy that we’ve done that and we’re happy to be able to share it with the fans. I think we deserved the three points. We were unlucky not to keep a clean sheet in the end, but we dug in well and got the win, which is the main thing.”

Having waited patiently for his opportunity to start a league game, he certainly took the chance with both hands as he covered almost every blade of grass.

“The lads have been playing well so all I’ve been able to do is bide my time and make sure I take my chance when I got it,” he explained. “You’ve just got to support the lads if you’re on the bench and do what you can when you get on.

“It’s been hard to not play much, but we’ve been playing well so you can’t really complain when the boys have been performing like they have been.

“I’ve played in some reserve games recently and it doesn’t matter what game it is, when you get the opportunity to play you know the gaffer is always watching. It’s a chance to show him what you can do, and that’s what I’ve done in the last couple of games I’ve played thankfully.

“He’s decided to play me against Salford and I enjoyed every minute of it. I just loved being out there. I want to improve on my goal scoring because I did have a couple of half chances. Hopefully I can get a few goals like Jon [Mellish] has!” 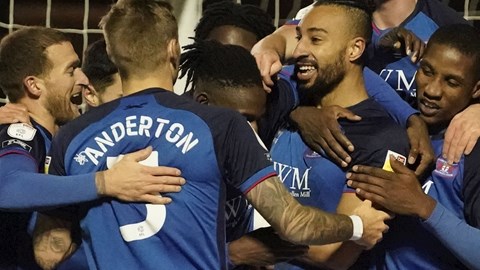 But what went through his mind when the manager confirmed ahead of the game that he was in the starting eleven?

“I knew I just had to play my game and keep it simple,” he replied. “I know if I just play the simple passes and don’t try to overcomplicate things then I can put in a good performance and help the team.

“All you can do when you get the nod to play is show everyone that you’re ready. You’ve just got to give it your all and do your best for the team.

“That’s my first league start but hopefully now I can kick on and keep playing and help the team when I am.

“The boys have been at it all season. We’ve just got to keep doing what we’re good at and what we know we can do. If we do that I’m sure we can beat anyone in this league.”

Next up for United is a trip back to Valley Parade, with the midfielder confirming that it’ll feel strange to make a return to the club where he cut his teeth as he came through the ranks.

“I wouldn’t mind starting again against Bradford on Saturday,” he admitted. “It will be strange for me to be in the stadium but not be playing for the home team.

“We want to do well for our own reasons because we know nothing is won at this stage of the season and that means we can’t take our foot off the gas. We’ve got to keep going and be up there come the end of the season.

“It doesn’t matter where teams are in the table, no games in this league are easy. Bradford are down there at the moment, but we know they’re still a good team and we need to be on our game to beat them.”

Click HERE to watch an interview with Danny Devine on iFollow United now.