Goals from Gime Toure and Lewi Alessandra helped United to their victory against Wigan Athletic on Saturday afternoon as the team showed more good signs with the first game of the new season now just under a fortnight away. 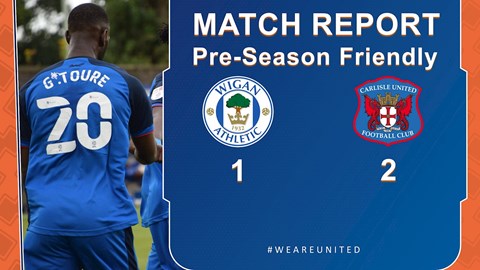 “It was a step up again,” he said. “It’s our third game and you could tell there was a competitive edge to it, with a few tackles. There were a lot of chances both ends, we were pleased to create lots of opportunities, and we’ll look at why they created opportunities, but they’ve got some really good players.

“The way we played, especially the first 60-70 minutes, was really pleasing. There’s nothing worse than just a practice game, people tippy-tappy it around and nobody makes a tackle.

“This was the opposite. Without crowds, as the first few competitive games will be, you need that edge to it. That’s where you get your fitness; not by going through the motions.”

The Blues took the lead late in the first half when new signing Gime Toure finished off a slick break with a calm strike.

“It was a really good finish,” he agreed. “He came on earlier than anticipated. He’s joined us this week, he hasn’t done loads of training before he joined us, he’s had a tough week, and to get on and score a goal will help him settle in.

“He’s a good character. Scoring can only help him integrate and feel part of the group. Our winner From Lewi was another really good finish.

“He’ll probably be thinking he could have had two or three on the day. With his experience, he doesn’t panic. In the first half he should have scored, but in the second half he kept his composure and slotted it away.

“He was one of the players I thought performed better today. He’ll gain from that and he’s got a lot of minutes into his legs too.

“Joe Riley came on, got the last half an hour at right-back and he’ll be better for minutes. It’s been a bit stop-start for him so it’s pleasing to see him back on the pitch.” 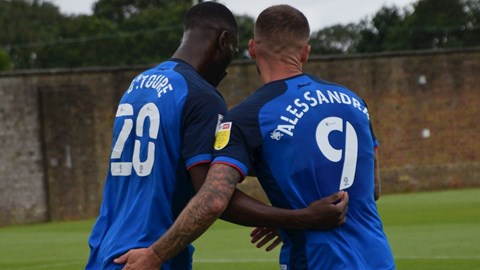 GALLERY: Action from the Wigan friendly

And with the team recording the victory, and with just two more friendlies left to play, he told us: “Winning is vital, because it grows that winning feeling.

“Winning any game gives you confidence which leads you to play better. Possession was good, and it’s important, but it’s what you do with it. We created a lot of chances. It’s about doing that, working their keeper, which we did better than on Tuesday, and hitting the back of the net.

“The goals came from good composure and good finishes. The second one was good composure from JJ Kayode, taking that extra touch rather than rushing it, which leads to Lewi’s excellent finish.

“With that first goal, they had their chance then 20 seconds later we’ve scored. It was that type of game. Both teams had a right go for it, it showed our fitness levels to turn defence into attack, and it was a good goal from a team point of view.”

SEASON TICKETS: An update from the chief executive

One concern was the early departure of Omari Patrick, who left the field after 15 minutes had been played.

“Omari has returned from injury, he’s had a really good week in training and has got a lot into his legs,” he explained. “He just felt it tighten up, so as a precaution we took him off.

“We’ll assess it over the weekend and hopefully it’ll be nothing more than a bit of tightness. Dean Furman was our trialist and he did well. He did well, he’s trained well. He’s got experience, and he performed at a good level.

“It’s open ended with him. We’ll talk about it over the weekend and we’ll take it from there.

“Junior Mondal picked up a niggle and he got treatment on Friday. He isn’t fit at the moment, so we’ll see how he is on Monday.”

Next up for United is another pre-season friendly on Tuesday [details tbc later today].

“We stepped it up a bit more today,” he said. “Some of the lads got longer than 45-50 mins, and we might look at that again on Tuesday, when we look to step it up again.

“It’s a balance between wanting those minutes in their legs and not wanting to go and get someone injured. It’s about managing that, because they’re going to have to be ready for 90 minutes, but you don’t want them not to be available because they’ve pulled up in a pre-season game.”