A huge feature of pre-season has been the positive response by the fans to the updates, signings and interviews which have made August 2020 one of the busiest online months on record. 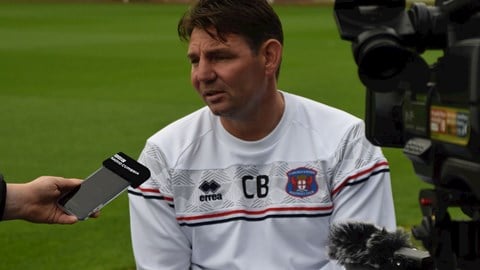 Speaking about the good will which has been generated, manager Chris Beech said: “It’s been a big part of pre-season and I’ve been trying to help create that.

“I want us, and I’ve said this since I walked in the door, to be united. Carlisle United is the name and we’ve got to bring unity to the club.

“In terms of what we should do this season - we shouldn’t really do anything, because financially we shouldn’t, if you look at the league table from that structure.

“But I take great admiration of teams like Wycombe who are unbelievable at taking stress on, and don’t fret under pressure. It’s almost like being a boxer that’s very good at taking jabs and getting hits and, when they decide to punch, they punch hard.

“The way they play football splits a lot of rooms, but in terms of admiring their spirit, and achieving something, I admire that from afar. That spirit is something we want to create within our team.”

With Charlie Barnes and Liam Lightfoot having joined Kendal Town on a half-season loan spell this weekend, he told us: “The younger players are in the mix, there’s no exclusion.

“A couple of lads will go out on loan, as we’ve seen, and maybe a couple more after that point. You don’t learn unless you play. It’s good to be in different environments, having a different voice, as long as they’re trying to meet our traits and principles.

“I’ve done it at Rochdale. I had a youth team lad, an under-16 who broke all the records for goals, played in the reserves, became the highest scorer, but was a bit scared of his own shadow.

MANAGER: It's about having capabilities and adaptabilities

“We sent him out to a non-league club in Manchester and all he did was bang another six goals in. The manager was happy with him but I wanted him in a football way to get sort of roughed up, but it didn’t really work out.

“It’s important wherever they go that they try to stick to those traits and teach the lads, and they then have a different experience coming back.

“Gav and Mark Birch will take a real close eye to how those players will help us. Ultimately they have to try and bridge that gap. Currently they’re not going to affect the three points but hopefully they can support it in the future. It’s important to try and get some football in them with that in mind.”

Also working his way up to full match fitness is late arrival Gime Touré who has gained valuable pitch time since joining the club just over 10 days ago.

“Gime has had a shock to the system,” he said. “He came in on the hardest footballing day we’ve done, his hands were on his knees. We didn’t want to put him on as early at Wigan, but we did. Then he played a bit longer because of Brennan ‘s injury at Sunderland.

“The Liverpool game was more of a training day game for us, and I really split everything up in terms of looking after Aaron Hayden, who played back to back minutes, and Lewis Alessandra and Jon Mellish didn’t play.

“Gime was involved and he’s got that under his belt now. He’s rested, has a smile on his face, and we’ve just had a conversation about understanding what I want from him and what I would consider his, ours and mine, and what’s expected of him on the pitch. It was good, we talked about Anelka and Thierry Henry, so we’ll see what he does.”


United took an early lead and battled hard to take all three points on Saturday afternoon in what became an enthralling encounter with Salford City at the Peninsular Stadium.


With it looking unlikely that we’ll see a return of fans to Brunton Park until the beginning of next season (and even that has yet to be confirmed) football clubs the length and breadth of the country...


As we all look forward to the lifting of lockdown measures, the club are pleased to announce that the Blues Store will reopen for online and telephone orders from Monday 1 March 2021.

CHIEF EXECUTIVE: All along we've wanted fans back at the earliest opportunity


The announcement from Prime Minister Boris Johnson on Monday came as no surprise, but it was still a sobering moment when it was confirmed that a return of fans before the end of this season is now...