At his first press conference of the new season, held under strict Covid-19 guidelines, manager Chris Beech confirmed that he’s been very impressed with the levels of fitness his players have shown as they return from the uncertainty of the lockdown to a more ‘normal’ training environment.

“That means they haven’t been doing things they shouldn’t do and, like all of us, they’ve had to lock down and behave. They’re in good health and we had a run-out the other day against Fleetwood, which was great.

“Fleetwood have only had two or three weeks off so they were pretty much match ready. We had a good 45 minutes against them before we Joey and I started changed things around.”

“It was good to get that game and we’re all excited to be back,” he added. “It’s brilliant, I love it. It’s very exciting with beautiful weather, the pitches are perfect and it’s great to be doing it again.

“I’ve really enjoyed the last couple of weeks with the lads, so excited for the games to start, the proper games. The lads are showing good energy and spirits so, yeah, I really am excited.”

But what can’t be ignored is the impact the lockdown had brought for everybody, with lives changed beyond recognition once the pandemic tightened it’s grip.

“There’s been lives lost, so that must be really difficult,” he said. “Imagine going to a funeral and you can’t, if it’s someone close to you, even hug the person in sorrow.

“It’s taken us to places we’d never thought we’d go, this virus. Now, as the world opens up a bit more, we’re in a different place. Football’s starting, and we have a responsibility in my opinion to try and make a difference to that. It’s been really difficult for a lot of people.

“I’ve spoken about how it’s been with me, with the situation with my son [Brandon] and all of this is nothing new from a personal perspective. This is pretty normal.

“Yesterday ,I’ve left Brandon in Leeds hospital, his lung function is low and he needs some help to get it up. I took a little selfie of him at the window and the first question he asks is - can you pick me up Friday, we’ve got Workington Saturday.

“His commitment and thoughts are all towards football. It’s emotion, it’s what we are. I feel normal again because I’m at work, but it’s just what it is. Hopefully I can get Brandon to a ground he’s never been to before on Saturday.” 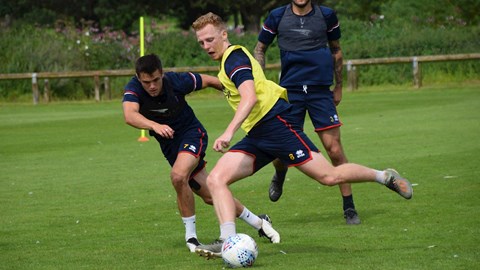 With Jack Armer, Aaron Hayden and Omari Patrick having missed out on Tuesday afternoon, he told us: “You’re going to get niggles at this stage because the lads have had four or five months off.

“We’ve got quite a few games booked in because it’s like anything, you forget what you do and you need to play to get back into the swing of things.

“You get the blisters, the tight hamstrings, of course you’ll feel like that when you’ve been working hard. It’s about getting more robust to the knocks and it’s all about the psychology of football.

“Training on your own is easy and on your terms, but when somebody is taking something off you and you need to get it back, it does test you. That’s what this training is all about.

“Aaron is training today but Omari might not make it until next week. Jack Armer, he got a real bad dead leg on Saturday. He’ll be alright though, he’s a tough cookie, someone that likes training. “Carlisle supporters, when he gets going, even though he’s a young player, they will really relate to his characteristics. He is very good, robust and hard-working.”

And another notable absence was defender Tom Wilson, who also missed the Fleetwood trip.

“Tom did his ankle just before lockdown,” he confirmed. “It was a little bit like Callum Guy. Very poor timing for an injury … Neil [Dolly] was packing his bag for Aberdeen, a couple of lads had injuries, and it was in the crossover of recruiting another physio.

“Tom’s fortunate that his parents work in medicine, doctors, and the club have sorted him out correctly. He’s ended up having an operation, but he’s only just had it and he’s now having his rehab.

“It was probably more difficult for Callum because his recovery was in lockdown, when you couldn’t see a physio and Dolly was going to Aberdeen. We’re looking at months for Tom, but he’s a younger player and time is on his side.”