Assistant head coach Gav Skelton spoke to us shortly after full-time on Tuesday afternoon as the Blues went up against Fleetwood Town in the first of their pre-season friendlies. 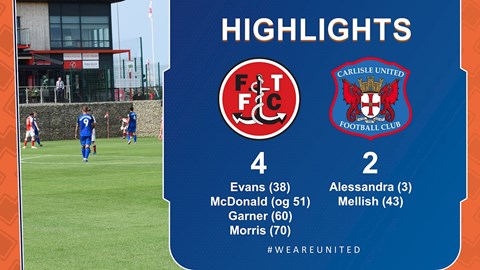 “It was an excellent workout,” he said. “We had a lot of new players, we haven’t had a game as a club for quite a few months, and in your first game you’re never quite sure what you’re going to get.

“I thought the majority of it was excellent. We haven’t been back in training for long but the standards and fitness levels were really good, and something people can take a lot from.”

With Lewis Alessandra notching up the first goal of the game with just three minutes on the clock, he commented: “The work we’ve been doing is built on how we press, the tempo and speed of everything, especially in the first 15-25 minutes and you could see that.

“The players have bought into what’s required and the goal from Lewis was a really clinical finish. I think his performances last year were excellent; all that was lacking were more goals, which he probably deserved. 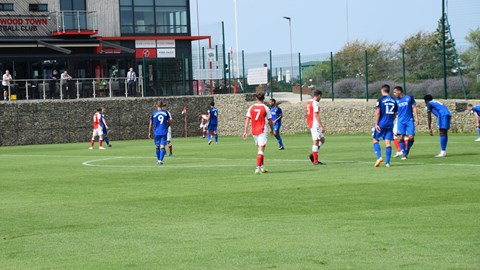 “Both of the goals were really good finishes, clinical into the bottom corner, and we’ve been speaking to the players about hitting them low, not the shots that go in the top bin. They look great but they also give the keeper a chance.

“The build-up was impressive too in the way JJ [Kayode] worked. Opportunities aren’t always created by one hundred passes. It’s often by forcing other teams into mistakes. If they’re not set, and you’re clinical, you’ll score goals.”

With the Blues having played a full part in a game packed with decent passages of play, he added: “That’s pleasing to see. If you’re going to create chances that way, that’s good.

“But there’s loads of options to score goals from set-pieces, forcing the opposition into mistakes. Keeping the ball, moving the ball, people moving off the ball. We know we’re a long way off where we need to be but there were good small steps. It’s the first game, pleasing, but lots to work on.”

Manager Chris Beech employed a structured system for his sibstitutes, with players getting 45, 60, 80 or 90 minutes respectively.

“These are strange, unprecedented times and that also relates to pre-season,” he explained. “They’ve had a lot of time off so they need to get minutes into their legs. You can train as much as you want but, there’s nothing like games.

“It’s a build up towards the season and that’s exciting, everyone’s missed it. There’s nothing like a competitive edge for us, the players, and excitement for supporters. You miss that adrenaline rush.

“If we can start as well as we did in the first 15-20 minutes here we can have some really good times this year. It’s nice to be back on the pitch. You only realise how much you miss it when it’s not there for ages and you don’t know when it’s going to start again. 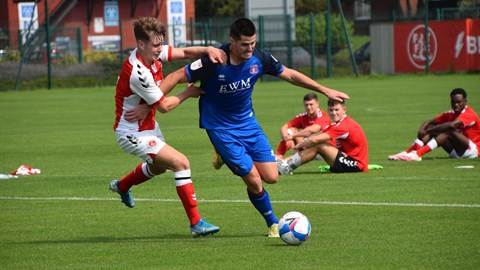 “It wasn’t like your normal, slow pre-season game where everyone keeps the ball and nobody tackles. There were lots of tackles, which you want. It was a good tempo. It helped us when we scored early, that kind of shook them and brought us to life as well.

“Particularly for the first 60 minutes it was very competitive. Then, as in pre-season games with lots of subs, it becomes a little bit disjointed but overall, pleasing. We’ve got lots of new lads, it’s not just adding three or four, it’s a new team again and there’s a lot of work being done to get them ready.”

Also getting a chance to get game time within the first environment were a crop of under-18 players and first year professionals, who ended the game on the pitch for the Blues.

“Just like last year some of the younger lads got good pre-season minutes,” he said. “It’s a good chance to get in front of the manager and they’ll have to keep raising their levels to stay in that first-team squad.

“We had a couple of trialists and they’ve acquitted themselves well in training. They did well in the game and it’s something I’m sure discussions will take place about.”