With the fixtures being released on Friday, everything still feels very strange as the Blues prepare to play at least the first month of fixtures without fans in the stadium. 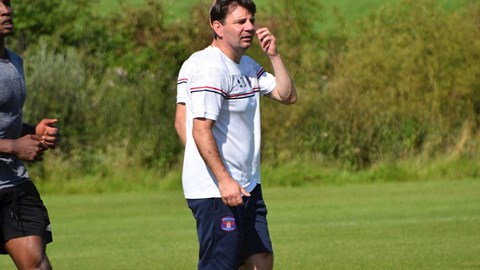 INTERVIEW: The only way to get game ready is to play games

Speaking about the task of keeping the fans connected through what is an unprecedented set of circumstances, boss Chris Beech said: “I think that’s where you become very important, the media and the press. You convey a message. If we get that right, that’s all it can be.

“I hope it is from a positive stance, because we have had in the past I think some negative comments, and it’s not quite right what I see. I remember the last couple of games when we played Colchester and Newport and there was a significant difference in tweets or comments. But we won 2-0 at home.

“I’d love it if we can support the supporters by the press helping convey the same message.”

“I think the way we’ve conducted ourselves through the lockdown has added with that,” he added. “Andrew [Jenkins] is a family man and he’s made sure the club has continued through difficult times.

“Don’t get me wrong, they pushed it a few years ago and invested a lot of money in trying to get promoted, and things have recovered from that point. To be in the position we’re in when we know supporters aren’t going to be allowed into the stadium, and to see nobody leave or get made redundant, or be asked to take pay cuts and things like that, and to see everybody support each other and dig in together at that point was fantastic.

INTERVIEW: We're all excited to be back

“A lot of clubs didn’t do that, but we did, and that makes me feel very proud. It was actually something I was able to talk to players about when I met them, because it shows them what type of club we are and what we’re trying to become. It all comes from original, simple fundamentals and a sense of family values.”

“We’ve all got to reconnect and unite. We’re Carlisle United, I’ve been saying that from the day I walked through the door, and I try to do my best with my staff to encourage that growth in them.

“When we’re in a time of supporters not being allowed to come - I think the press have always played a massive part in everything. If we all stick to our true core family values and represent what’s actually happening then we can convey that message to our great supporters, who will be watching from afar.

“It’ll be a great day when they can come in again, I can tell you that.”