United’s Tuesday afternoon game at the Stadium of Light proved to be another stiff test as the Blues came up against not one, but two strong Sunderland teams. 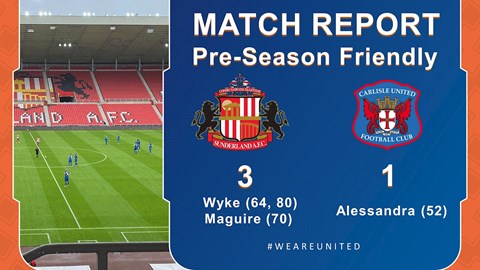 MATCH REPORT: From the Tuesday friendly

Assistant manager Gav Skelton gave us his reaction shortly after the full time whistle had blown.

“It was a really good game again, wasn’t it,” he said. “Thank you to Sunderland for hosting us. The surface is brilliant and the rain made it very slick and put a zip to it.

“When you look at some of the tackles there was a certain edge to it and I think both teams got a lot from it. We’re pleased that we went one-nil up, and we were performing well, and something we need to learn from is that if we suffer a setback we need to react better, but overall it was a really pleasing performance.”

A feature of all of the friendlies so far has been the high tempo and positive approach adopted by the boys in blue.

“That’s because of the situation and the fact we’ve been without a game for so long,” he told us. “The lads are new and it’s important they play to how we want to play as quickly as they can.

“They’re under pressure to perform a certain way and they’ve responded really well to that. It is still pre-season but that bodes well for the season as a whole. We’re really pleased with the workout today and I thought up until around 60 minutes we performed excellently.

“Although we’ll be disappointed with the last 20 or 25 minutes it’s still important because it’s got real minutes into the legs, and it’s the first time some of them have done 90 minutes in a long time.”

“It was good to see us create chances again,” he continued. “We got into some really good areas but, if we’re going to be ultra-critical, you have to take them and finish them off.

“Likewise if you’re in a position to make the final pass, make sure that pass sets up an easier opportunity for the person who receives it to score a goal. But, yes, it’s really pleasing how we’re getting into that final third with varied attacks.

“It isn’t just about crosses, there was some good link play through the middle and we had defenders overlapping and forwards dropping in, and that was also really pleasing. We don’t want to be a one-trick pony and that means we have to work hard to create opportunities from different areas.

“We kept going and we got close near the end, but they were 3-1 up by then and the game was going away a bit. That shows a good level of fitness and also demonstrates that we cleared our heads so that we could go again. If we’d dropped our heads it could have ended up as four or five, so it was good to see the lads taking the game to them. That was another positive.”

Alongside Fleetwood and Wigan, the Sunderland game made for a third League One opponent in what has been a shortened but valuable build-up period.

“These games don’t feel like friendly games where the ball is tapped about and people get back into shape,” he commented. “It’s really up and at them and if it was a league game there might have been a few cards flashing about.

“It was played in the right spirit but there were some strong challenges, and it had a real edge to it. We spoke about it at Wigan and Fleetwood, and it’s good to see that it’s been the case. We’re getting a lot from it and hopefully we won’t get punished as much in League Two as we are against higher opposition at the moment when we make little errors, or drop out of position.

“Sunderland have some excellent players and when they changed it at 60 minutes they brought on some real powerhouses.

“That was tough for the lads to deal with and you could see that in the first few minutes just after they all came on. They had that extra zip, but sometimes through the season we’ll come up against setbacks, whatever they might be, and we have to cope better if we really want to compete.

“If we stay calm and don’t panic we’ll be better placed to get back into the game on our terms. When their new players came on that’s a lesson we can definitely learn, because we lost our shape and that allowed them to attack us. If you work hard to stay in a game it will come back to you. Unfortunately we didn’t do that, but for the first 60 or 65 minutes I thought we were excellent.”

“Some of the lads played more minutes than they have for a long time so they’ll feel it tomorrow when they wake up. This level of work is vital, and it’s almost psychological when you’re getting this amount of work into the legs because you then get the confidence to go full tilt for 90 minutes.”

A scare came for the Blues early in the first half when new arrival Brennan Dickenson limped from the pitch following a heavy challenge right in front of the dug outs.

“I haven’t really heard what happened with him,” Skelton said. “With being caught up in the game situation, but he’ll be assessed now and gain in the morning by the physio. Hopefully it’s nothing too serious because he’s been outstanding and I think the fans will be really excited when they see him because he has real quality.

“Omari [Patrick] wasn’t with us but hopefully he won’t be too long. Taking him off was sensible after he felt a little twinge. He’s under treatment and we’re hoping that’s short-term and not long-term.

“Dean Furman had a slight knock so we didn’t risk him. He’s another we hope to see back soon. Junior Mondal was our other trialist and he’s trained excellently, but that’s not one we’ll be taking any further at the moment.”

With the new season knocking loudly on the door, he also confirmed that individual performances have provided a lot of food for thought.

“I think it’s good because a lot of people have given us a lot of difficult questions to answer in terms of how they’re performing, how they’re applying themselves in training and how they’re now doing it in tough games,” he said.

“They’re making it hard for us because they’re pushing each other. Obviously you might be set in one or two positions but it’s still up for grabs, and it’s a vital thing that we have that competition.

“We’ve got Tuesday coming up next week and today’s game really has posed us some questions. Some people step in front of others from games like this and I always find that what you think your team might be when you first come back is never what it actually will be.

“Some lads don’t hit the levels as quickly as they’d like and others surprise you, which is always pleasing.”