Assistant boss Gav Skelton was on media duties following the away draw at Gateshead on Tuesday night, and he spoke about the importance of getting minutes under the belt with the season now just under three weeks away. 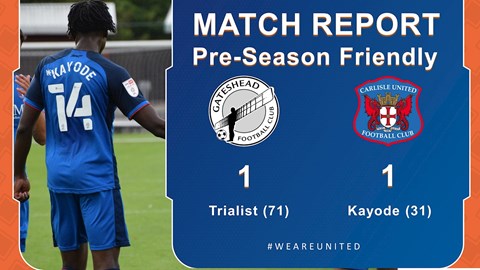 “It’s good to get another game, particularly after Saturday had been called off,” he said. “It’s even more important with the fact we have a new squad, so it’s important to get cohesion and relationships.

“I thought at times there was some good stuff but, same as last week, lots of stuff to work on. A number of players got 90 minutes, which is good.”

“It’s not about results but you do want to win,” he continued. “You don’t turn up at any sporting fixture and not to try to win. We’re disappointed that we didn’t.

“Credit to Gateshead, they made it tough and hung in the game. I felt it was the most comfortable at 1-0, but maybe lacked in the final third that final pass or shot, but that’s what pre-season is for.

“We’re not far away from the start of the season but we’re early in terms of the team coming together. There were some really pleasing signs, in the way we got the ball back and forced mistakes, and we went one up, and deservedly so.

“Maybe in the second half we played too many safe passes. It’s that final pass or cross, working their keeper, creating a couple more opportunities. It’s vital we get these games in, it’s not long, 2.5 weeks, we haven’t got much time to bed them in.

“That’s why they’re playing more minutes in early pre-season games than perhaps they normally would.”

GALLERY: Images from the Gateshead friendly

On the fitness levels shown by the lads, who kept going right up to the final whistle, he told us: “They are fit lads, they’ve come back in good condition, they’ve worked hard.

“They might be stiff and tired but we’ll have a hard session Thursday, another game Saturday, and a busy week next week. Working hard, get those fitness levels up, get those relationships with a lot of new players playing together.

“We were getting in behind them, starting to put crosses in, and it was nice to get in front from a good finish from JJ. We’re really pleased we got him back, he looks in good condition. I think he’ll be a real asset for us.

“It was disappointing we couldn’t capitalise in the second half but like any friendly, changes start coming, people are getting a little bit tired and it went a bit flat at times. Ultimately we’re disappointed not to win the game.”

The hard-fought encounter at the International Stadium was a first opportunity for new arrival Brennan Dickenson to get a run-out with his new teammates.

“At times he showed some of his qualities,” he told us. “He’ll be better for that. He trained on Thursday and Friday, sorted a few things out at home over the weekend, trained yesterday, and he’s got game time under his belt. It’s really good for him to get to know the other players, them to know him.

“Omari [Patrick] is getting there. He trained yesterday, he’s had injuries, and he trained today in a small group. Hopefully if he’s fit on Thursday and Friday he’ll play on Saturday. That makes us stronger.

“Gime has come in, hopefully he’ll train with us this week that makes us stronger as well. We hoped to play a trialist tonight but it didn’t quite happen. Hopefully at the weekend he might be available. It was a good opportunity for the signed boys, they are the main focus.

“We need to see the trialist in a real game. He’s trained really well, but that’s the next step. Junior Mondal and Joe Fryer picked up injuries from the internal game on Saturday, so we’ll see where we’re at with that.”


Having created a ‘no excuse’ environment over the first half of this season manager Chris Beech insisted that the challenges to his training schedule thrown up by the weather were not about to get in...

MANAGER: There are positives and negatives in everything


United boss Chris Beech revealed at his online Friday morning press conference that the club had been dealt a double injury blow with midfielder Jamie Armstrong and defender Morgan Feeney both ruled...

INTERVIEW: It's something I'm very proud of


When striker Lewis Alessandra next takes to the pitch it will be appearance number 500 – a significant milestone in a career that started at Oldham, and which has seen him play all of his games in the...