It’s been quite a journey for defender Aaron Hayden since joining the club at the beginning of last season as he’s gone from struggling to nail down a place in the match day squad to local hero status with a series of committed and full-blooded displays following the arrival of manager Chris Beech. 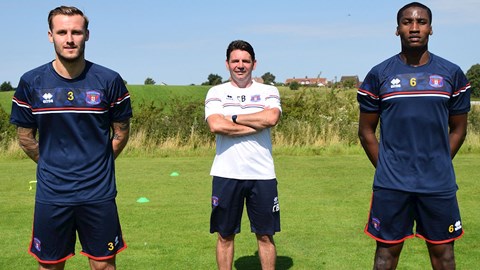 And the new 18-month contract earned by the 23-year-old midway through last season has been complemented by his appointment as the club’s vice-captain for the 2020/21 season ahead.

“I’m extremely proud of myself for what’s happened over the last six months,” he said. “It’s the same with the team when you think about where we were six months ago.

“You can see that everyone is building and growing and I’m really looking forward to the season ahead and to getting going again.”

When quizzed about what has been an amazing turnaround on a personal level, he commented: “That’s life isn’t it. You never know how it’s going to go. There will always be peaks and troughs, and it’s about how you deal with them at the end of the day.

“I do pride myself on how I deal with the low times, and with knowing that I can come out of it and find a way to win.

“It’s that kind of spirit that needs to run through our team this year. We’ve got to find ways to win, even if it’s not going how we want it to go. Of course there are going to be down times, but as long as you know you can work to get out of them then it’ll be good for us in the end.”

More specifically on the vice-captain role, he told us: “Like I said, I am extremely proud. Since the manager came in he’s put confidence in me and all I want to do is repay him for that.

“He’s the same with the team, he gives us all confidence and that shows in the way we play for him, because of the belief he’s given us.

“I think we reflect the winning mentality he has on the pitch, and we try to replicate his values of hard work by doing more than the other team, by outplaying them and by looking to score more goals.

“Everyone knows that’s what he wants us to do and we’ll be working hard in pre-season so that we go into the new season with the best possible chance of getting promotion.”

With a responsibility to bring more to the dressing room environment, he said: “I always try to do my best all the time anyway, and I like to demand that from others out on the pitch.

“I think we’ve all got to be leaders out on the pitch this year, that’s important if we want to do well and go up. 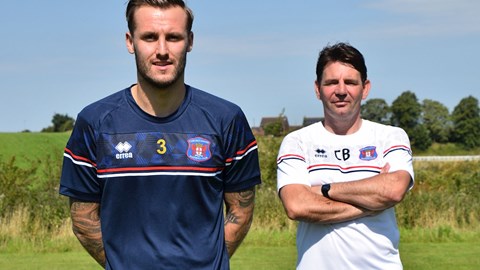 “The gaffer has made that pretty clear already, to be honest. He wants both me and Nick to lead and to encourage the others to be leaders as well. We’ve all got to take responsibility and he leaves that down to us, to be honest.

“He takes care of what he does but he looks to us to lead the changing room. He puts a lot of trust and belief in us with that and I think that shows when we go onto the pitch.”

And on working alongside Nick Anderton, the new club captain, he commented: “I think both of us are very passionate people and everyone has made us feel so welcome from the moment we came to this club.

“Every time we go out there we give 110% and it will be like that from all of us in every single game this season.

“Every game is a tough game in this league, and we’ve got to treat every one of them like a cup final. I know that’s an old cliché but you’ve literally got to be bang at it for every game if you want to achieve something.

“In my opinion you can do all the fancy stuff, and the things that look good, but if you don’t work hard you have no chance of actually winning.”

“These are really exciting times right now,” he continued. “We’ve got some good players coming in and if we can continue the good form from the second half of last season we won’t be too far away.

“It’s important that we build on that and from the players the gaffer is adding to the squad I have no doubt that will be the case.

“There’s a lot of hunger and confidence in the team. We have competition for places and I think even now we’ve got people looking over their shoulders because he’s bringing players in who have a competitive edge to them.

“The good thing is that it’s the right form of competition, it’s being done in the right way, and that’s something all of the top teams have. Players support those who are playing, but everyone knows they want the shirt as well.

“The gaffer is creating that environment with his new signings and we’ve got players who now don’t know if they’ll be starting. That means everyone knows they have to be at it if they want to be in the team.”

Last season saw the big central defender develop a versatile streak, at one point being used as top as the team went on the hunt for goals.

“I love defending more than anything,” he insisted. “Honestly, I’d rather make a goal line clearance than score at the other end, even though I do like scoring headers.

“I pride myself on defending, I’ve loved doing it since I was a kid. “When I was just seven my dad asked where I wanted to play and I told him straight away that I wanted to be in the defence.

“I have played up front, I think the fans have seen me do that here and I do like it, but it can’t beat being at the back and heading balls away. I really do take pleasure from that.” 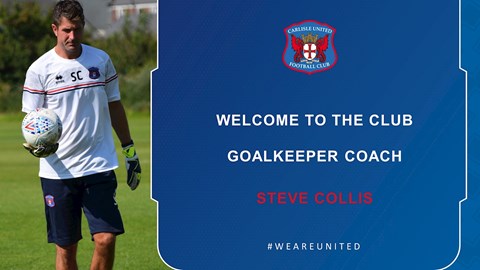 But having already built up a repertoire of eye-catching celebrations, he told us not to rule out the chance that there may be more of them to come.

“I planned the one with the ball up my shirt because I’d just had my first child and I thought that I had to do something to honour her,” he confirmed. “I thought a celebration like that would be fitting so, if anything, she gave me an incentive to score. I really wanted to do that for her.

“Life’s changed since she came along and it’s amazing. It’s given me a new perspective on life, a refreshed hunger. Even though I was hungry before my hunger levels at are at a place I never thought they would be. Every time I step onto the pitch I know I’m not just playing for myself now, I have something really driving me on and driving me through. It’s just the best thing in life.”

But what about the season ahead?

“First of all for the team, I think there’s one clear goal and that’s promotion, no matter how we do it,” he said. “We need to get into League One, we need to get this club back to where it needs to be. That has to be League One and above, not League Two.

“We need to find a way to do that and that’s why we need to take it one game at a time. It’s not going to be easy, but that has to be the goal for us.

“I do have individual targets, which I won’t go into right now, and that’s why first of all, to simplify it, we need to play well as a team and win games.”