United boss Chris Beech revealed this week that forward Gavin Reilly had been a transfer target almost from the moment the manager came through the door in November, with him finally getting his man this week. 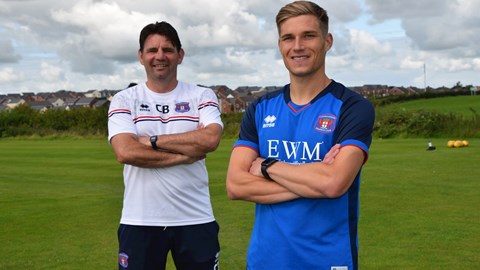 Speaking about the move, the lively forward told us: “I was born in Gretna and lived there until I moved up to Edinburgh, so it’s nice to be back home.

“I had a bit of other interest, but I’d actually spoken to the manager here in January, when he was interested in bringing me to the club. The deal fell through for a couple of reasons, but the main one was that I went back to Bristol Rovers after my loan at Cheltenham had ended.

“I played a few games for them, so they didn’t want me to go anywhere else. I’ve kept in contact with the gaffer since the season ended back in March, but once I knew he was still interested I just wanted to get things tied up, and I’m glad it’s all sorted now.

“I’m very grateful that I’ve got my contract sorted because there aren’t many clubs doing business yet, although the transfer window has just opened, so things might start to move on that score.”

“During lockdown a lot of clubs were saying they were interested without actually offering a physical contract, so once Carlisle offered me something and we got the loose ends tied up I was happy to get it all done,” he continued.

“The direction the manager wants to go in and the way he wants to play football is obviously a big part of why I wanted to come here too. I had a look at the results once the gaffer came in and at the turn of the year the team seemed to really kick on.

“I think if it hadn’t been for lockdown they would have finished in a higher position in the league, because they were in good form. Hopefully with another couple of additions like myself, along with the core of the group left from last year, we can kick on this season.”

And on whether he feels he has something to prove as he heads into his next challenge, he commented: “I’m only 27, but I’m actually one of the oldest lads in the group, which is a little bit hard to take actually!

“I’d like to say I’m experienced and I’m at the stage in my career where I do really want to kick on. I’ve played in England for two seasons now, but I don’t feel like I’ve played my best football here yet.

“I had a good spell on loan at Cheltenham, but I really want to establish myself down here and I feel that this is the club where I can do that.”

“I think the main difference in Scottish and English football is the travelling and the amount of games you play,” he told us. “There’s a lot more travelling in England and you play more games down here.

“In terms of the level I played at in Scotland compared to League Two there isn’t much difference. There’s more chance of success in England and more chance of making that big step.”

On what he wants from the season on a personal level, he said: “I just want to get a good run of games and see where it takes me.

“I started my career at Queen of the South and although it sounds weird, one of the good things was that we got relegated in my second season. That meant a lot of us young lads who were there got a chance to get games under our belt.

“The next two seasons there were good for me. I started racking up a good number of appearances and a lot of goals, which I was delighted with.

“Off the back of that I earned my move to Hearts which was a move I couldn’t turn down. They’re a massive club and I really enjoyed my experience there. Looking back, it was maybe a move I made too soon, but I definitely learned a lot from that experience.”

“I went to St Mirren after that and that was my standout season,” he confirmed. “We got promoted and my performances that year earned me another move, which was to Bristol Rovers.

“I enjoyed my time in Scotland, but I did always want to have a chance in England to see what it was like. I made a lot of appearances and got a few goals in League One, then last year played the majority of my games in League Two, so I feel like I’m definitely good enough to play and have success at this level.”

With this signing being one of the club’s worst kept secrets ever, the news was greeted by a fantastic reaction from the fans across the social media channels.

“I think the fans already know I’m signing but I haven’t really got social media, so I haven’t seen much of the reaction,” he said. “I was back up in Gretna seeing my family a couple of weeks ago, once lockdown eased a bit, and I think that’s when the rumours started.

“If you move back up to Gretna there’s only really a couple of clubs you can go to, so the news tends to get out. If it’s a positive reaction I’m grateful for that, and I just want to repay it.

“I’ve got a partner and a young child now, and I enjoyed my time living in Bristol, but we didn’t have that much help or family support. It was nice living away, but we didn’t really get to do things ourselves.

“We’ve got a lot of grandparents up here, which I’ll definitely be using for babysitting duties once we get moved back up. I feel like I’m at a good age where I really want to get settled at a club and hopefully that will mean I play my best football.

“Success for the team is the main aim for the season but I want to come here and score a few goals as well.”

And for those who may not have seen him play, he told us: “As a striker I’m very energetic and I like to run in behind, as well as link the play.

“I’d like to say I’m a fox in the box and I’ll pick up any chances that come my way. Throughout my career I think I’ve shown if I get chances I do score goals and hopefully I can bring that into this team.”

And with training now in full swing, he continued: “We’re all desperate to get going again. We’ve been doing non-contact training in small groups, and even then the lads are itching to get back into contact situations.

“I had a few things I needed to take care of, so my first session was last Wednesday and it was good to meet everyone. I’m just looking forward to getting on with it now.

“That’s even more the case after the last few months. The lockdown period has been frustrating. Games are back on now and there’s been play-off games and things like that, and watching those just makes you want to get back out there even more.

“Hopefully the tide has turned a bit in terms of the virus, because at the end of the day lives have been at risk because of it, which is more important than football. We’ve got the guidelines to follow and the start date for the season, so everyone is itching to get back and get playing games.”

Click HERE to watch an interview with Gav Reilly on iFollow United now.