Confirmation came earlier this week that fans will be able to watch all EFL matches played during the restricted capacity period of the 2020/21 season via the official iFollow service, with United set to stream fixtures on a game-by-game basis at a match pass cost of £10 per game.

CHIEF EXECUTIVE: Reservations are looking really good at the moment

Speaking about the latest developments, chief executive Nigel Clibbens said: “iFollow has been sorted since we last spoke.

“We got the announcement early this week, as we expected, and clubs have the flexibility to either sell or gift match passes on a game-by-game basis. Some clubs will gift match passes to their Season Ticket holders because they have already sold tickets for games they won’t be able to fulfil.

“From our point of view, we’ve said all along that we’ll only sell what we can fulfil, so we don’t have that issue to deal with. That means our fans who want to watch it at home can do that on a match-by-match basis for £10 a game.

“There is no scope to buy iFollow Season Tickets because there is no guarantee that it will continue all season. The iFollow solution is temporary while we have reduced capacities. It’s a great opportunity for fans who can’t get to games at home or away to still support the club.”

But, with match day issues reported in the past, will the service be able to cope with the expected demand?

“We’ve had the assurances that the system will work under the increased demand,” he confirmed. “I think in the past there have been some glitches, but the majority have been explainable, rather than the system failing. 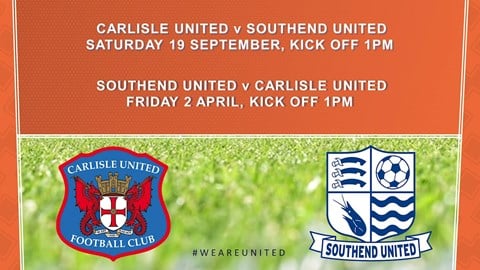 FIXTURES: Southend kick off changes home and away

“Our fans will be able to watch it and listen to the BBC Radio Cumbria commentary while they do, which gives us a better service for our fans. We’ve just signed another deal with the BBC to continue that service, which we’re pleased about.

“Especially from a financial point of view, the away games will be of interest. Usually, if we sell an away ticket, we get 5% commission, so if we have 300 away fans that commission isn’t a very big earner for us. Now, the club will get our away income from our fans who watch via iFollow, which comes back to our club, so that will be a bonus for us.”

One area of concern for some fans has been the end-date for the streaming of fixtures, which still remains uncertain as the first game on Tuesday night is readied for its live broadcast.

“At the moment, there is no clarification about when the iFollow service will stop for Saturday fixtures,” he confirmed. “It is very flexible, the solution is temporary, but we don’t know how long that will last.

“From our point of view we’ll take it on a match to match basis. There has been talk about it running until the end of the season, but I’m much more cautious about that.

“Our first game that fans will be able to watch is the Fleetwood game in the EFL Trophy on Tuesday night, which we’re pleased about. We had to wait a little bit longer for clarification on whether fans would be able to stream that game, but we’ve just received the green light moments before we started this interview.

“For most of us it will be the first opportunity to watch a Carlisle United game in nearly six months. We’ve obviously got the new players that no one has seen play yet, so that will be exciting, and we’re pleased we can offer fans that service.”