SEASON TICKETS: An update from the chief executive

We spoke to chief executive Nigel Clibbens to get his thoughts on Friday afternoon.

“Initially the plan was that those who had made their reservation would either pay in full, or begin to pay, on Monday,” he said. “We’ve looked at that and we’ve learned a few lessons from how busy we were on the first day of reservations 10 days ago.

“Therefore, and I think it’s important for me to repeat this, we won’t be taking any payment from anybody at this stage. New Season Ticket holders for seated and terraced can make their reservations on Monday, and they will not pay yet.

“Those existing Season Ticket holders who have already made reservations, please don’t contact the club on Monday. We will contact you once we have decided what the overall price will be, and we will start the payment process at that point.

“We don’t want you to try to contact us at the same time as fans are ringing us to make new reservations. We want to leave the lines open for new reservations only next week.”

“Some fans have set up direct debits and once we’ve finalised the price they’ll be contacted to tell them that it will be activated, and they won’t have to do anything,” he continued. “For those who will pay cash, the club will contact them. That means we can manage the process and they’re not waiting on phone lines and waiting for long periods of time to pay, or find out what’s going on.

“It might seem strange that we’re not rushing to get the money in, but I’ve said all along that this hasn’t been about taking cash from people. Financially we’re in a sound place, so this is about doing right by the fans.”

As for what the final prices will be, he told us: “I think we’ll make a decision on what we’ll charge Season Ticket holders on Friday next week.

“As we get to the end of next week, unless there is a definitive answer from the Government, we’ll have to go for a date and charge based on that date, and at the moment it looks like it’s going to be a 20-game season at home.

“I think fixture release day helps in terms of us knowing when we may potentially be able to have fans back in. You can see with the way the fixtures have fallen that we’ve got three home games before the end of October, and based on the statement that the Prime Minister made in July, it looks like we could have 20 home fixtures for Season Ticket holders.

“However, by lunchtime on Friday we were talking about fans in test games in Scotland in mid-September, so it is still all very uncertain. We’re still waiting to hear definitively, but it’s looking like it might be a 20-game Season Ticket.” 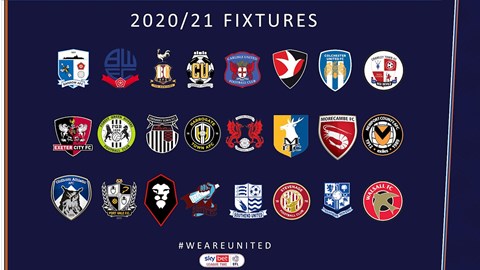 So with over 1,400 spaces already gobbled up, we wondered where that left things for the opening of reservations for new Season Ticket holders.

“It’s hard to set any capacities because they change all the time depending on bubble sizes,” he commented. “We will never get a finalised capacity, it will always vary, if we get lots of groups of six the capacity goes up, and falls if we have lots of single fans.

“What we’ve started doing in the west stand is looking at odd seats here and there that have been left empty because of social distancing. If we can move a couple of people around, we could potentially fit 10-15 extra fans in those stands.

“Given the restrictions, we’ve got to take that opportunity if we can. We’ve obviously wanted to put fans as close to their preferred seat as we could, but we’ve said all along that we needed the ability to move people about.

“I’ve got to say that in the coming days some fans, it won’t be many, may be contacted by the club and we might be saying to them that if we move them two or three seats, or a row here or there, we can get a lot more people in, which is something we want to achieve. That process is now starting.”

“I looked at it yesterday and we found in B Stand that if we potentially moved four groups, it created another nine seats. Similarly we were looking at C Stand, and if we can move four or five people we can create another nine seats.

“That’s something we have to do to get as many people as possible in. I hope fans will understand that they might get that call to ask them to move, I’m sorry, but we’ve got to do what we can.”

But have their been any problems or hiccups along the way?

“Overall it’s been far better than anybody could have expected,” he insisted. “Football fans of any club tend to be pretty traditional types, who have sat in the same seat and they come to the game using the same routine. I’ve always been the same myself and not being able to do that does cause a bit of angst.

“Almost to a man, woman and child, everybody has taken what we’re going through on board and said, right, we’ll do this because this is what’s needed to get most fans into the stadium. The next question has been – can I have my old seat back in future? And of course they can, that has always been the intention.

“If this went back to full capacity, as normal, in a month’s time we would quickly go back to normality and get people back to where they want to be. The fans have been fantastic, but obviously you’re going to get one or two, and where that’s happened we’ve tried to explain why we’ve made the decisions we’ve made.

“I put a long piece out last week about why we’d allowed people to move within the whole west stand area, not just within their own stand, to try to answer some of the queries on that. Not everybody was happy but, with something like this, that’s just the nature of it.”

In the final part of our weekend update we’ll be talking to the chief exec about our iFollow options.