Had things been normal we would now be into the final two weeks of the season, with one eye on the future and recruitment for the 2020/21 campaign, and director of football David Holdsworth confirmed this week that the current situation is throwing up a number of challenges for the football side of the business. 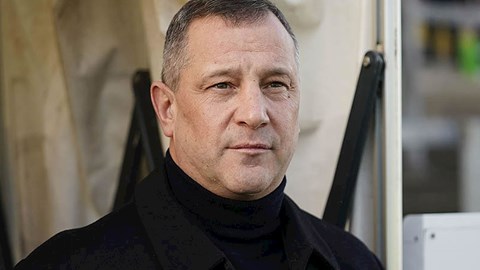 INTERVIEW: We've adopted a 'we will be ready' style of approach

“I don’t think the fans need me to tell them that it’s difficult on that side of things at the moment,” he admitted. “Our club secretary and finance director are looking with others, myself and Chris at contracts but, the difficulty is that as things stand we still have nine games of this season left to play.

“Without firm guidelines on a return date we have to accept that when it comes to loan deals, short-term deals or even deals that end in June, we can’t put anything concrete in place. We can plan for what could happen, but we can’t actively engage in it.

“As I say, as a club, we aren’t going to act too quickly until we know where we stand.”

“For Chris, he has to have a restart of this season in mind, but he also has to look at what he would like to do for next season, because it’ll come at us very quickly once things start moving again,” he continued. “That’s why it’s been important for him to know that he has the full support of everybody at the club, because this set of circumstances are unprecedented. Nobody has been through anything like it before.

“It’s a tough thing, it really is, and all we really want is to be able to do what’s right by everybody. In terms of next season, we’d started meeting to discuss our plans back in February and the ideas coming out of that were really good for the club.

“Results had picked up, the next steps to enhance that for next year were being outlined, but that process has been put on hold somewhat with the way things have happened with this horrible virus.

CHIEF EXECUTIVE: Football has never faced anything like this current situation before

“As time goes on it’s only natural that the players it affects will become slightly more anxious and, in turn, their agents will be concerned for them, and I’m sure that will lead to an increase in phone calls from them all.

“On the other side of it, managers will be anxious about how and when they’ll be able to properly look forward and turn plans into reality, because their jobs and careers depend on that.

“If we peel everything else away, a player out of contract at any club has a family, a mortgage, bills, a career … the list goes on. They are bound to be feeling stressed about the uncertainty of all of this.

“Managers will be feeling the same. Thinking about Chris, he has short-term deals and loan deals which end before any restart will come into effect, we know that as a fact, so where will he stand with that when it comes to getting the nine games done? Information is coming through to help us to make these decisions, but nothing is set in stone.

“That’s why we won’t rush into anything, because what if it all changes again? There are real concerns on the playing side of things about what we should or even can do next, but it will all become clearer once the main task of beating the virus has been achieved.

“This is why we’re all working so hard behind the scenes because we have to do what’s best and right for Carlisle United.”

“We all want the EFL to give clarity as soon as they can, but I think the EFL themselves would love to be in a position to do that,” he commented. “But how hard must it be for them to find the best way? Within our club, as we talk, we’ve all got different ideas on whether it should end now, or should we wait as long as we can, should we go behind closed doors … none of us completely agree.

“I made my thoughts clear last week, but those are my thoughts. It doesn’t mean I’m right. Multiply that by all of the EFL member clubs, some with promotion and relegation issues to think about, and how do you find the best solution to that when things are as they are right now in terms of fighting the virus?

CHIEF EXECUTIVE: Every club has its own approach

“Whatever decision is made, it will upset some, and that’s why my personal opinion is that we should just get on and make the final decision, whatever that may be, so that we can all start to plan properly.

“Nigel has outlined the financial implications in his updates fantastically well, and we can all see that football has some big challenges ahead. Not least how do we start playing again. Do we travel; do we centralise – is that even safe when some areas of the country are affected more than others; do we shut the public out; how many staff get in if the public aren’t there; what’s the safest way of doing it? So many small but big issues to resolve, it’s amazing to think about really.

“That’s why we’re committed to looking after our football club in every decision we make, within whatever the current guidelines are. Again, and this is a personal opinion, I’m against taking any kind of risk at all with this virus.

“We have to be certain we aren’t carrying it around and spreading it about before we even think about getting together to kick a ball. If we take risks this killer bug simply won’t go away.”

“I think myself and Chris have been in agreement on that,” he confirmed. “The thing I’ve stressed to him, but he feels this himself anyway, is that being a manager is secondary to what he needs to do with Brandon, his son.

“He’s a fantastic young man and I was so pleased to see their story on the website last week. That hammers home the importance of the NHS and the importance of family. Brandon has to be number one priority for Chris, and I know he always will be.

“I think Chris has the potential to be an excellent manager from what we’ve seen so far. He already lives and breathes this club, and I don’t think this lockdown has dented that. It’s a test for him, but he knows everybody is behind him.

“We all want to look after him because we feel he’s the man to take us forward once this is all over. It’s a pause in his career I know he would have preferred not to have had, but it’s another part of a learning curve not many others have had to face. He’s been superbly positive throughout it all and that can only stand him in good stead.”

And his final message was for the fans.

“All I can say, and these aren’t just words, is that I’ve seen first-hand through this that you have a fantastic group of people who work for your football club,” he said. “The focus behind the scenes on doing what is best for the club is phenomenal.

“The responsibility everyone is feeling is huge because they know how much this club means to people. That’s why we’re all over social media with community messages, some of the wonderful history of the club, Nigel with really detailed information, and all of the other things.

“We want you to know that we’re here, we’re ready, and we’re doing everything in our power to give you a club that’s healthy, focused and determined to represent you all in the right way.

“I will say this, once we are able to get back to Brunton Park and we have our shirts, hats, scarves or whatever on, how good is that day going to be!”