Three wins and a draw from the August league fixtures had left spirits high as the Blues headed into the second month of the 1994/95 season, and they went into the away game at Scunthorpe in confident mood. 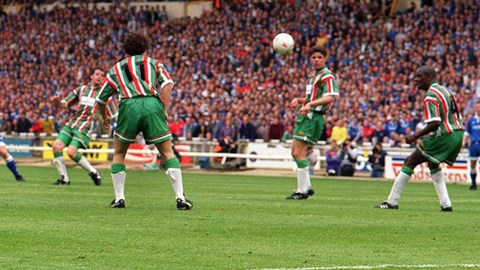 And what a game it turned out to be.

Now, such was the manner of the victory and its subsequent no-brainer entry into the annals of United folklore, if all of those who claimed to be at this match were actually in attendance we’d have packed the away end with more than we took to Wembley later in the season!

Scunthorpe were a decent side, tipped to do well, and they established what appeared to be a comfortable two-goal lead as they pretty much dominated the first half.

Cue a half time telling off and an attack-minded approach after the break which brought a trip on Simon Davey, and he fell to the floor inside the area with not that much of the game left to play. Davey, a spot kick specialist, was disappointed to see his initial kick saved, but Tony Gallimore spared his blushes as he steamed in to sweep the rebound into the net.

Then came the stuff of legend.

The Iron were running the clock down, and were doing it quite successfully, but they were undone by an absolute beauty of a goal from substitute Jeff Thorpe late in the day when he stepped inside his man and curled an unstoppable chip into the top corner.

But Carlisle weren’t about to settle for the point, and Cumbrian-born Thorpe struck again as the away side pushed forward in numbers with seconds left to play. His header from a well-worked corner caught the keeper unawares and the travelling deckchair army behind the goal went crazy as they realised that their side had just snatched victory from the jaws of defeat in the most dramatic fashion.

Next up was a return to Brunton Park for what turned out to be another tough encounter. Exeter City weren’t having the best of starts, indeed they would go on to finish bottom of the division, but United were relieved when Rod Thomas put them in front with an opportunistic overhead kick.

The Grecians refused to lay down, and they created a number of good chances, but the points were on the brink of being sealed when captain Davey was felled and a penalty was given.

Striker David Reeves put the ball on the spot, but the keeper went the right way and the hosts had to settle for just the one-goal victory.

Watch the highlights from both games here:


Everyone at Brunton Park was deeply saddened to learn of the passing of John Courtenay on Saturday evening.


The story of April 1995 was two-fold – the history making first ever trip to Wembley to face Birmingham City and the gaining of the points needed to bring the league title up to Cumbria.