Manager Steven Pressley spoke to us about the importance of the away victory at Stevenage shortly after full time on Saturday afternoon. 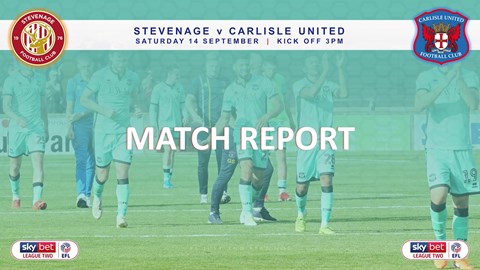 MATCH REPORT: From the Stevenage away game

“It was a really important victory because if we hadn’t won I think there’s have been daylight between us and the top seven clubs,” he said. “We’ve actually only lost once in our last four games, although the loss last weekend was disappointing. It was importand we responded tl that and we got back to passing the ball and building the play, and we showed patience.

“I thought apart from a couple of moments where we gave up opportunities, we were very much in control of the game. I was really pleased with the performance, it was a very good away performance and we looked devastating on the break.”

Having tweaked the formation but stuck with the principles of how he wants the team to play, he commented: “I think it’s important not to deviate from what you believe in through difficult times.

“That’s what I’ve said all week to the players. If we get back to passing the ball and playing our way we’ll win games. There was no panic, and the players deserve enormous credit.

“I’m still disappointed we lost two goals. We can’t keep doing that, and I realise that, but we’re certainly a team that’s exciting. We also showed resilience because not only did we go a goal behind, but when we went ahead only to be pegged back really quickly.

“That can be demoralising but we showed good mentality and I’m really pleased with the lads because to go on and win it gives us all a real lift.”

On the recent run of form, he said: “We’ve got two wins and a draw in our last four, so we’re showing signs that we can be a good team.

“We know we’ve got a lot of hard work ahead, and as I said to them after the game - which the senior players reiterated - we can’t take a step forward then take a step back. We have to show a greater degree of consistency.

“We’re still a team that’s growing all the time, we haven’t had the group together long, and we haven’t had long to bed in everything we’d like to. That takes time, and I believe with the right stability, and hard work with the players, we’ll get there.”

“In terms of the change of formation, I looked at our players and the problems we’d been given by other teams,” he explained. “I didn’t want to take away our attacking prowess with the three up front, but I felt we could get better pressure in the wing back areas to stop crosses.

“I also felt in terms of passing the ball, with the change of formation we could stretch the game more. A 3-4-3 is great for countering and we showed that throughout the game.

“There wasn’t a lot of change to our principles of play. I felt it gave us better speed down the sides, and Gethin [Jones] on a couple of occasions did really well, and I thought he had an excellent debut.

“He was very calm, and the big thing was he gave us mobility down the sides. When you play with a three at the back, quite a number of clubs play with two bigger full-backs in those areas, it’s a good way to play. I thought he did terrific, gave a really assured performance and was very controlled in possession.”

“That system also gives us a good counter-attack threat, especially with McKirdy and Thomas up there,” he added. “One of the features I’ve been working towards and talking to them about is that when Fela comes deep and links the play, the two wide attackers must look to run behind, and we did that to good effect today.

“Harry’s two finishes were excellent and Nathan has got another goal as well. I thought Fela’s work up there was terrific, although he didn’t score. He does a lot of work to bring others in to play and you should see how happy he is in the dressing room, I was really pleased with his contribution today.”

And on bagging three goals away from home, he told us: “I want to play fast, attacking football so for us to score another three goals is pleasing.

“I thought we did that to good effect, but we also showed real patience. In the early part of the game we were hemmed in but we kept playing our football, which we continued to do when we went a goal down. Eventually we got the rewards from doing that.

“I’m not getting too carried away. You have to enjoy the wins but in this league, where there are so many games and it’s relentless, you can only enjoy it for a couple of hours before you’re onto the next one.

“It was nice to send the fans home happy and we want to do the same on Tuesday night. At this moment in time our away form is better than our home form, but we have to turn that around. Brunton Park has to be a place other teams fear coming.”