Carlisle boss Steven Pressley gave us his reaction to the hard-earned away victory at Scunthorpe shortly after full time on Saturday afternoon. 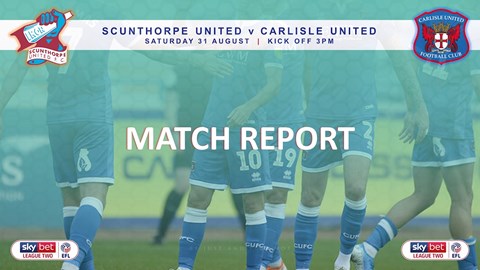 MATCH REPORT: Summary of the Scunthorpe away game

Speaking first about the importance of the win, he said: “It’s massive. Because we’ve had a lot of kicks of late in terms of playing so well and not getting what the performances deserve.

“Today we didn’t play well, in fact we were really poor in the game, we didn’t play what I call our Carlisle way. But we found it, we got the breakthrough and we dug in. We showed a different side to us which is really important.

“We’ll not come away from home every time and be allowed to play the brand of football that we want to play. We had to show that. I also thought looking at us, we looked fatigued, we looked tired from Tuesday’s exertions - I cannot tell you how hard they worked on Tuesday. We looked fatigued.”

“The most important thing was about coming away from home and winning,” he added. “Our away performances haven’t been good enough, so to get that monkey off our back, get that first away win of the league season, is really important.

And on the clean sheet, he commented: “The area of the pitch I was absolutely delighted with was our two centre-backs. I’ve got so much faith in these two players and they answered every question today, they were outstanding.

“That was pleasing. Christie Elliott was a doubt, he’s been struggling the last couple of days with illness and he showed a great mentality. We’ve talked a lot about the forward players, but I think Jack Iredale in recent weeks has been amazing and he was again in this game.

“We all have a responsibility to help each other. Today was the defenders’ turn. Credit to the likes of Nathan Thomas, who’s been in devastating form. He looked a little bit fatigued today because of the exertions on Tuesday but boy, did he do his defensive work, and that’s really pleasing to see.”

With the Blues having to grind their way through a difficult first half he admitted that strong words were needed during the break as he looked for a better response from his team.

“It was a half-time where for 10 minutes I raised my voice and told them – they’re not the standards I expect,” he explained. “Deep down in the back of my mind I knew they were fatigued, I could see it in our performance, our pressure, the way we went about things, our sharpness, but there was no way I was going to give the players that excuse and I told them that.

“But, well played to them. I’m really proud that they won here ugly. It was a game where we never got control, a 10-minute period maybe in the first half. That’s why we had to do what had to be done and see it out ugly.

“It was a really important game. Not a game I’m proud of in terms of the performance. I told the players they’re not the standards I expect of this team. No way. I expect a lot more. But considering Tuesday’s exertions, considering it was a difficult game, an edgy game, we showed a good mentality. A clean sheet was vitally important for us.”

“This isn’t the type of performance we’ve become accustomed to this season, but it was a different type of win and sometimes you need to win these ways,” he said. “It was a performance I was proud of in the mentality, but not in the way we played.

“It is the three points that matters. The ironic thing is that we’ve played a lot better away from home but haven’t quite shown the steel to get the points. I spoke before the game about that – we had to show that away game mentality and thankfully we did.

“Football never ceases to amaze me. I thought we were rubbish in the first half but we showed a good mentality and plenty of desire. The last couple of weeks there’s been a lot of disappointment, not in performances, which have been amazing, but sometimes you think what do we need to win a game?

“We couldn’t ask at times any more from these players. They’ve been terrific. I read their manager’s comments prior to the game, and he said exactly what we feel – we’ve played some terrific football, had some bad luck at times, but our points tally doesn’t reflect how we’ve played in the early part of the season.”

Looking ahead to how the squad can build on the result, he commented: “We work hard again this week. We’ve been a very effective team in terms of our performance at home and we have to continue that.

“I think our performance has been quite consistent but results a little bit indifferent. The lads will be off on Monday because we actually have a bounce game. I think a number of players require it.

“We’re playing at Sunderland and this will give us a chance to get some game time into players that haven’t played regularly of late. For the players that have played it’s been non-stop and it’s hard work.

“Monday will give us game time for Jarrad Branthwaite, Mo Sagaf, Aaron Hayden, in fact Fela, because I think he’s still short of fitness. These types of player will all feature.

“These games are really important for our development and their fitness. Because the last three weeks have been how they are, we haven’t managed to organise that. When we get the free week it’s really important that we have to take advantage of it.”