United boss Steven Pressley gave us his reaction to the Exeter home game shortly after full time on Saturday evening. 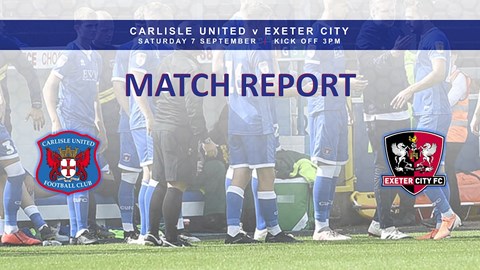 “We didn’t start the game in the fashion I expect us to,” he said. “We talk a lot about the game management in the opening ten minutes, and for some reason we didn’t manage the game in the manner that we talk about.

“We gave ourselves a chance in the game when we equalised, but we didn’t take the initiative once we did get that goal. Fela [Olufela Olomola] getting his third goal was pleasing, and it was a point in the game where I thought we were back in it after a period where we actually did some of the things I want to see.

“But it wasn’t a long enough period and we didn’t manage to build on the all-important equaliser.”

“The big thing for me is that you can talk a lot about different aspects of the game, but if you strip the game back, first and foremost, the work ethic of the group has to give you a chance of winning,” he continued. “I’ve spoken a lot about this group recently, and I’ve said they’re a terrific group and they’ve given everything, and I’ve believed that, but I don’t believe that happened for us today. I believe we fell below those standards and we were poor both in and out of possession.

“These types of players have got to work harder. Jack Bridge, on aspects and details we work on in recovery, didn’t work hard enough today. There’s a lot of things that weren’t right, but the fundamental part, and something I pride my teams on, is their intense work rate and I felt let down today by the group, and I’ve told them that.”

“It’s hard to put my finger on why that happened,” he conceded. “I thought we prepared properly and correctly. Things like our reaction to an immediate press, things that we do all the time, weren’t there in the game. In the end, we were fortunate it was only three. Adam Collin had a wonderful game.

“You can talk a lot about different aspects, but if you strip it bare, we just didn’t work hard enough today. We need to understand the type of team we are. We’re an intense football team, that’s what I’ve built here, but that’s not how we played.

“We were much better in the second half, but still not at the levels I want from us. It was a disappointing afternoon. We rode our luck early on then we managed to get a small foothold in the game, but the overall performance was disappointing for me.

“I think we’re better than we showed, but I don’t want to take anything away from Exeter, who are a very good side. Their manager has moulded a good squad together and they deserved their result, but I’m only looking at us and I think we can do much better than we did.”

Looking ahead to the preparations for next weekend’s trip to Stevenage, he commented: “We need to show that we can turn things around. Words don’t decide that, it’s about performances and results, and we have to bounce back.

“Everybody has to take their chance when it comes. We’ve got a small group and we’re working hard with them, but we need more than we saw this weekend. We have to get better at doing what we were doing in the initial parts of the season.

“We have to have more courage and if the game goes away from us a little bit we have to keep playing. Our best stuff always comes from us passing the ball, and when we stop that and get away from that, we don’t look as effective as a team.”

And speaking more about the good aspects we’ve seen through the first month of the campaign, he said: “I think we need to be realistic here. This is the ninth game, and for eight games they have worked tirelessly.

“Let’s look at this as an isolated incident, I hope. It’s not that I don’t think they applied themselves, they just didn’t apply themselves at the level I expect. They have been, they’ve been working exceptionally hard, but we fell below the levels I expect from us.

“I wouldn’t be critical of them if I didn’t think they could produce it. I’ve seen it in the opening eight games. Today wasn’t a reflection of what I take great pride in. I think it’s a marker and it tells you we have to improve in many ways.

“That’s what we’ll work towards. At this moment in time we’re short in certain aspects, but we have to do better.”