With United having returned to winning ways at Brunton Park on Saturday boss Steven Pressley spoke more this week about the need for consistency in results as the preparations for the trip to Newport begin. 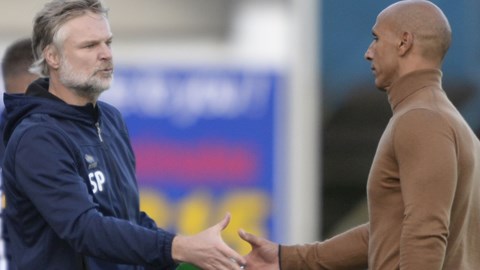 MANAGER: We showed a good mentality

“That’s the target – consistency,” he agreed. “I think we’ve shown some green shoots of consistency, but we need more. If we’re going to be a team that are pushing at the top end we certainly need more.

“The truth is apart from three or four teams there’s not many at this moment showing huge consistency. But we certainly have to show more than we have thus far.

“With the win on Saturday, the dressing room was obviously delighted, but they know in there that we can play better than that. We know we can play better than that. They’ve taken great encouragement from the work they did and from the work they’ve done over the last couple of days. I’m really pleased for them because they are all working so hard to take this club forward.”

“Before the Bradford game, we were showing play-off form,” he added. “We followed a good performance at Bradford with a home win, and I think we’re showing signs of improving.

“This club carries enormous pressures and expectations, and I have to manage those. I’m realistic with the group about where we are and the resources we’ve got, I’m not complaining, and I know my job.

“I know I have to work the group and keep improving them, and we’re working hard towards that. We work tirelessly with the players, but it doesn’t happen overnight, especially with the type of players we have.”

And the style of play, with an emphasis on passing the ball in all areas of the pitch, is very much a part of the identity that players and fans alike are still getting used to, particularly if possession is lost in key areas.

“We have to be brave to play the way we want to play,” he commented. “It’s very easy to take the ball out from your feet and bang it forward. That’s football that’s easy to play.

“You have to have brave players, brave people, brave staff to play the game the way we want. At times we did it well on Saturday, at times we didn’t, but we’re a team that’s evolving all the time and it doesn’t happen overnight. We’re working tirelessly to improve and that’s the one thing I can assure people.

“It can cause anxiety with fans, as we saw when we lost the ball at the start of the second half. To be honest we have an aspect where we talk all the time about the opening 10 minutes of the half, and we don’t encourage the players to play in those 10 minutes.

“It’s something we don’t encourage and that we’ve spoken about. At that particular moment Adam [Collin] thought it was on and he chose to make that decision. He’s an experienced guy, I trust him with my life, and he can make these types of decisions. In general in the opening 10 minutes of a game we try to manage it in a certain way, but I thought we managed the second half very well overall.”

“It does come under scrutiny when it doesn’t work, but I’ve analysed Adam’s use of the ball prior to this game, and from his last 70 distributions, 33 have been long and 37 short,” he explained. “There’s a good balance there. What happens is when you get a situation like the one we’ve just spoken about, when you maybe lose a ball, the microscope goes on it and everybody then becomes, ‘this is what’s causing the problems’.

“It’s not, I’ve looked at the distribution. A lot of our best moments in games are coming from our distribution. The goals at Stevenage from building from the back, bringing the team on, down the sides …but we only look just now at the negative aspects, and we get nervous about that. 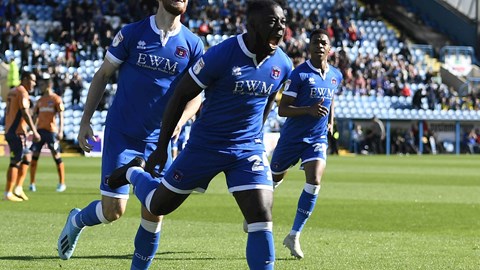 “I study them, and Adam almost had a full completion rate last week in his distribution, which is amazing. These things can sometimes come under the microscope when you have a disappointment.

“I want them to play but I also want them to manage the game, and that’s part of how we want to develop as a group moving forward, where we’re managing every situation properly. If you look at many teams when they kick the ball long, when it falls the other team pick the ball up, but we never look at that as being a problem.

“The ultimate aim is that we break the lines and go with speed. If you watch many teams that build from the back, they don’t complete it every time. It might be only two in five they complete, but that two in five are the two they get in with an opportunity.

“It’s not every time the build-up works, but if you keep working at it they can become devastating moments. Make no mistake, I want to be a team that manages the game correctly, that builds from the back, but also kick when it’s right to kick.

“The players know that, we work on it all the time, if the press comes full on, we eliminate the press. We’ve got loads of options that we work towards, that’s the bottom line.”

On the substitution of Harry McKirdy, who struggled following a second half knock, he said: “Harry got a kick on his calf. I was going to make the change, but he had a few moments of McKirdy quality and I thought he might still have been capable of unlocking the door.

“He went down again and we had to bring him off, but I was really pleased with how Ryan Loft played when he came on. He had a really good opportunity where the keeper made a good save, and I thought he gave us good physicality.

“With Harry, he’s the kind of player who can frustrate you but again, he went out to Newport and didn’t play, he didn’t really play at Crewe, so my job is to make him better. That doesn’t happen overnight.

“Harry is trying to embrace all the things I’m asking of him. I’m pushing him all the time. Out of possession he’s working really hard but he needs to improve on certain things. It’s an amazing tally for one so young that’s not played a lot of football and I’m really delighted for him. He’s made a big impression on our support and hopefully he’ll continue to improve.”

And on the half time switch of Hope for Thomas, he told us: “Bringing Nathan off was a decision I felt was right at the time.

“I was looking for a certain aspect and I didn’t get it, so it was a decision I made. I thought Hallam was excellent again, as he was on Tuesday.”