United boss Steven Pressley confirmed today that midfielder Stefan Scougall is closing in on a return to full training as he continues to recover from a hamstring injury picked up during the Rochdale cup game at the end of August. 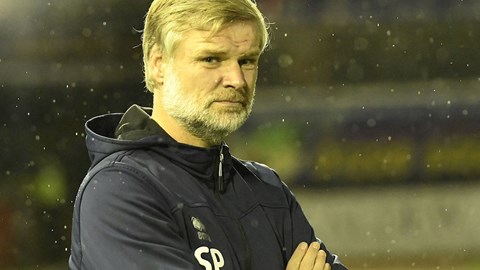 MANAGER: a learning curve for the young players

“He’s getting closer, he’s probably a week to 10 days away, which is pleasing,” he said. “The way he plays makes him an important player for us and it will be good to have him back and available.

“Obviously we are still without Kelvin Etuhu. He’s been to see a specialist with Dolly and the advice is that he’s to ease off just now, so we don’t know how long he’s going to be. The consultant is going to do a series of injections over several weeks and, again, the hope is that will assist with his rehab programme.

“It’s disappointing because he’s just been through the early stages of his recovery, and we hope that through the treatment he’s going to receive over the next coming weeks, we’ll begin to see more improvement in that.

“I spoke to him on the phone today [Tuesday], because it’s not easy when you’ve been out for that length of time. We just have to keep working with him and hope that through the treatment he’ll receive over the next month or so, we’ll see good improvements.”

One player definitely missing at the weekend will be midfielder Jack Bridge who will serve out his one-game suspension following his sending off at Bradford last Saturday.

“I had a team in mind for the Wolves game prior to last Saturday, and Jack Bridge wasn’t in it,” the manager confirmed. “Off the back of the two yellow cards we felt it would be important he got another 90 minutes under his belt.

“His absence leads to one or two options and considerations, and the other thing is I’m aware we have a number of players on four bookings just now, and that’s again another concern. We’ll certainly over the coming weeks have a couple of decisions to make.”

With a lot of players getting their first competitive 90 minutes for a period of time on Tuesday, he confirmed that some markers had been placed at his door ahead of the weekend.

“I think, with the performances we saw, a few have said that they really want to play, and that was an important factor,” he said. “The recent games when we’ve involved a lot of these players, the Sunderland and Hartlepool games, nobody’s really said by performance that I want to play in the first team. But there were quite a number who stepped forward on Tuesday.

“There’s a lot of unseen work going on at this football club. Only in time will people realise that. The concern to me isn’t too great. I know how hard we’re all working and how good the group is, how together we are as a group. So, I’ve got no concerns.”