Carlisle boss Steven Pressley gave us his reaction to the 0-0 draw with Forest Green shortly after full time on Tuesday night. 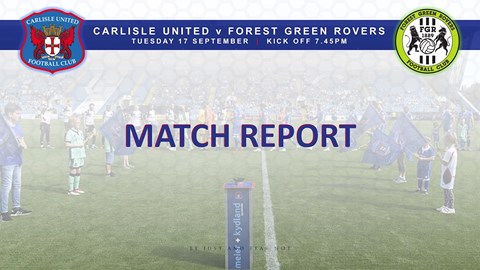 “I thought it was a really good tactical battle between two very good sides who both wanted to play football,” he said. “I think in reflection probably the nil-nil is the right result.

“I thought there were very few chances in the game as a whole, and the only real disappointment was that when they had ten men for the last 18 minutes we couldn’t capitalise on it. We didn’t quite manage to get through and create the chance that would have won us the game.”

“There were a lot of aspects I was really pleased with and sometimes there are good things that are overlooked as well,” he added. “I’ve just told the lads in the dressing room that Thomas and McKirdy seem to receive praise for their attacking prowess and their ability to score and create goals, but they were crucial to the way we played.

“Their tactical discipline was really important, and a lot of their work will have gone unnoticed. What I’ve told them is that if we’re going to develop and progress as a team then they need to be doing that kind of work, and I was really proud of them in that respect.”

On the team display overall, he commented: “It was a really good and organised performance and we did it against a very good side that’s been in the making for three years. The other great thing for us is a clean sheet.

“I want us to play attacking, fast football but also our defenders need to gain confidence, and they’ll gain confidence from a performance like that. We’ve said before that we want to win here at Brunton Park and I thought that especially in the first half we created some really good moments, particularly on the counter-attack.”

“With the formation, I wanted us to press and I wanted us to keep our shape, which we did really well,” he explained. “Our discipline was good, but I felt that when the opportunity was there to press and then jump press we could have done it more often, but we didn’t.

“One of the things I spoke about at half time was that we needed to be a little more aggressive, but I was pleased with the attitude and approach. But what I will say is that some of our counter-attacks in the first half were devastating because of the work Nathan Thomas and Fela did, and I thought Jack Bridge was outstanding.

“The work ethic meant it was a really strong performance but yes, and as I’ll keep repeating, we want to win these games. However, I do think we took a step forward. We’re showing good signs and I think we’ve only lost once in our last five, so that’s good to see.

“There’s a level of consistency, with two wins and two draws, but I want more. I want us to keep progressing and to not be satisfied with one defeat in five. I want us all to need more than that.

“The good thing is I’m seeing a group of players who are absolutely applying themselves. We had two players come down with cramp and I think that in itself tells us how hard they’re working.” 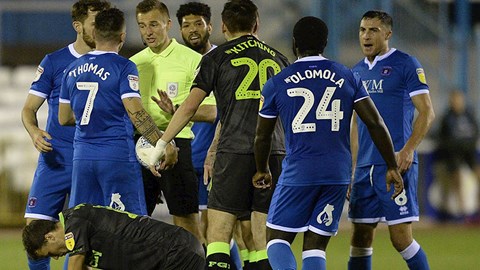 On the number of bookings on the night, he said: “I thought the referee was poor and that he made a lot of wrong decisions. He was consistent, I just can’t say what sort of consistency he showed, otherwise I’ll get in trouble.

“I was disappointed with him, and although I’ve talked about inexperienced referees being promoted up, he isn’t one of them. Wins for us are as important to our clubs as wins for Manchester United or any other Premier League side. To take the officials from the lower league and promote them all up to what they say is the best league, it’s unfair and we’re suffering from it.

“For my yellow card, Mills said something to me and I reacted to it. He got me with his fish hook a little bit. I was laughing about it afterwards, but in the heat of the moment I wrongly reacted. I had a chuckle with him at the end and it’s all forgotten.

“I thought there were a lot of decisions tonight that went against us, which was disappointing, but I think our players showed a really good determination and I want to focus on that. The Nathan Thomas penalty was a good example of that. I thought there was contact from behind but it wasn’t given and we just have to accept that.”

With Forest Green proving to be a very difficult team to break down this season he confirmed that the team shape had been put together with that in mind.

“Their organisation defensively was very good, even in the last 18 minutes, and they deserve credit for that,” he told us. “We had to stress the importance of our wide attackers tucking in and forcing the play on the outside.

“In the first half especially I thought we countered brilliantly and we got the tactics bang on. Of course we want to play the football and score the goals, but equally as important is that we have to stop conceding.

“I’ve been a little bit frustrated recently that we build a result but we can’t step forward from it. That’s why it was important for us to continue showing signs of good improvement in all areas. It’s our second clean sheet of the season so that’s pleasing. We got the rewards from having a very good work ethic.”