The next time midfielder Mike Jones crosses the white line it will mark his 500th career appearance (number 126 for Carlisle United) on a journey which has taken him the length and breadth of the country, with his debut with hometown club Tranmere Rovers followed by spells with Shrewsbury, Bury, Sheffield Wednesday, Crawley and Oldham which preceded his summer 2016 move to Brunton Park. 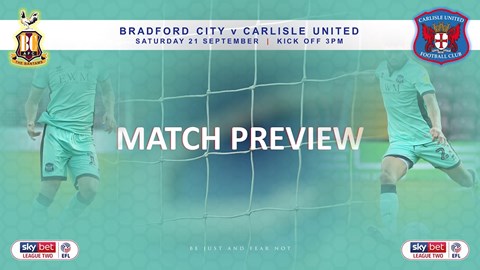 MATCH PREVIEW: We head to Bradford on Saturday

Still only 32, the popular and hard-working ball player admitted this week that the seasons have flown by as he contemplates hopefully many more games to come.

“I didn’t even know I was anywhere near 500 to be honest,” he told us. “My dad asked me what I was on last week, funnily enough, but I could just about remember passing 450, even though I didn’t know exactly when that was. It’s come around really quick.

“At the time it doesn’t feel like it’s flying by, but when you look back it really does. Tranmere feels like another lifetime ago and so much has happened in my career and my life since then.”

So, is he the kind of player who keeps tabs on this kind of thing?

“I think stats and things like this are more important to my mum and dad than they are to me,” he said. “I tend to just crack on and I don’t really take a lot of notice as to how many games I’ve played. It’ll be something I’ll look back on with a bit of pride when I’m all done and dusted, and it is a nice achievement, I get that, but it isn’t something at the moment that I’ll be buzzing about.

“That’s because I look back at different times in my career and think about where we could have done better and where we should have got promoted and things like that. You know what I’ve said about my time here as well, I want to get promoted with this club, so things like this don’t matter to me as much.”

But 500 appearances, and the vast majority of them starts, suggest that something has gone well since he first pulled a shirt on in anger at Prenton Park just over 13 years ago.

“If you look back at my career I’ve probably averaged somewhere close to 40 games a season, even though I had quite a long spell out with my ankle injury during my early time here,” he commented. “I don’t want to jinx it, but other than that ankle injury I’ve managed to stay injury free for the majority of it. I feel like I’ve always played, and if I’ve been on the bench it hasn’t been for very long.

“I don’t look back on it as a great career though, to be honest with you. It’s nice to reach 500 appearances but I’d like to have achieved more. Life is what it is, you could always be worse off or better off.

“Signing for Sheffield Wednesday was a big thing in my career but it just didn’t work out, and when I look back I’ve got a bit of regret because I maybe should have stayed there a bit longer and tried to work my way into the team, rather than going to Crawley when I did.

“I’ve had a fantastic few years here so far, but we haven’t achieved what I wanted to achieve when I first arrived and that is a bit annoying. Appearances aside, there’s a lot more I would have liked to achieve in my time in the game so far.

“Like I’ve said, it’s a nice milestone but my mum and dad will be more pleased than I am. I would rather be stood here with 250 appearances but with a better experience at Sheffield Wednesday and a promotion here with Carlisle on my CV. I’d much prefer less appearances and more promotions, but it is what it is.”

“It’s a tough industry so there is a bit of pride in making this many appearances,” he added. “I pride myself on being fit and keeping myself in shape. I’ll never settle for being on the bench or making the squad, I want to play, and I’ve always been like that.

“I love playing football and I love winning, but I’ve probably got to this milestone by keeping myself fit and making sure I’m always in the team. I believe in my ability, so I’ve always believed if I train well I’ll be selected more times than I’m not.”

When asked about who has made a big impression along the way he goes back to his time at Bury – a club where he made over 150 appearances – and the advice and coaching he received from Alan Knill.

“The gaffer here now has been one of the best I’ve had as well, and I enjoyed working with Keith [Curle]. There have been some managers I could tell you story after story about - and I know you wouldn’t believe half of it!”

We couldn’t let the mention of Bury pass without getting his thoughts on recent events which eventually led to the club’s expulsion from the ranks of the EFL.

“When I look at Bury now it’s so sad, because that was probably the best time in my career,” he said. “We got promoted and we had a great set of lads. I was young and being a footballer was new to me, but they were some really good times and, like I say, Alan Knill was a big part of that.

“It’s been sad to watch what’s been going on but there are mixed emotions there a bit, if I’m going to be completely honest. Nicky [Adams] is my best friend, so seeing him not get paid angered me, and it has to be said that what they did wasn’t fair on the league.

“You can’t get out of a division and not pay players. Any club could do that and it’s frustrating that it was allowed to happen. It’s not nice, I’ve got friends who are Bury fans who are sat twiddling their thumbs on a Saturday now, it’s people’s livelihoods and people’s religions, I don’t think some people understand how much football clubs mean to people.”

Back to the topic of his career, and it’s little surprise to learn that the good friends he’s made along the way are all also involved in the industry.

“All my friends now have been made through football really and I’ve met some really good people,” he confirmed. “I moved away from home quite early and I’ve lived in Manchester ever since, and my life has just revolved around football.

“Nicky and Jamie Proctor are my best friends and I’ve made them through football. I’ve met some great people and also seen a lot of different people along the way, if I can put it like that! I could probably fill 10 books at the end of my career with some of the mad stories I could tell.”

As with any job, even one perceived to have a glamorous edge to it, a certain level of motivation and desire is required to ensure that the contracts and games keep coming.

“There are a few things that have been said to me along the way that have motivated me throughout my career, but the big thing that drives me on is failure,” he explained. “I come from a good family and my dad is a real grafter, he’s built his garage up through 30 years of hard work, and failure has never been an option for me.

“If I have a bad game it eats away at me until my next one, where I can then put it right. People who have doubted me along the way have driven me on, and they keep me going.

“That’s why I’m desperate for success here. I came here with one thing in my mind, and that was that we would get promoted. Whenever I leave, if this club is still in League Two, I’d still look back at it with a lot of fond memories, but I wouldn’t be satisfied. Fingers crossed we can get the job done that I came here to do.”

Not wanting to wish the next few years away in any way at all, we wondered if he’d thought about what comes next once he does get round to hanging the boots up.

“There are still plenty of games left in me, but I don’t really know what I’m going to do when I do stop playing,” he told us. “In all honesty, football has become more of a job than a hobby in the last few years.

“As much as I enjoy it, there are a lot of things in football that people don’t see. I’ve talked about other managers, and managers I haven’t got on with, and over the years it does eat away at your love for the game a little bit.

“Seeing things like the Bury situation, and VAR, which I’m not a big fan of, it just feels like football is going the wrong way. I’ll see what happens when the time comes.”

INTERVIEW: We're getting sharper with every game


Defender Aaron Hayden got another 90 minutes under his belt at Chorley on Tuesday night and he admitted afterwards that it had been a tough test, with the hosts proving to be stern opponents in a game...

INTERVIEW: We're getting sharper with every game


Defender Aaron Hayden got another 90 minutes under his belt at Chorley on Tuesday night and he admitted afterwards that it had been a tough test, with the hosts proving to be stern opponents in a game...