Youth boss Eric Kinder took a look back at the weekend Youth Alliance group game against Doncaster as the Blues pushed and pushed without quite managing to make the breakthrough. 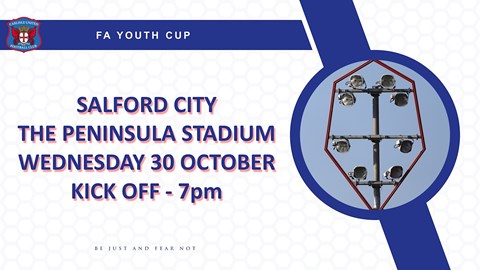 “The first half was pretty even, but we made the mistake and they got the only goal of the game,” he said. “One through ball killed us, but we went on to dominate the second half.

“It was frustrating because we tried three different people up front, with Ethan Henderson being injured. We haven’t got a centre forward and that’s been a problem for most of the season. We’ve lost games when we should have done better, but that’s just the way it is.”

“I was quite pleased with the way we played overall,” he continued. “We need to be better in the two penalty boxes. We need to defend our penalty box better than we have been doing, and obviously in the other box we have to start taking our chances. We’re creating them, we’re just not taking them.

“The way we’re playing isn’t an issue because our approach play is excellent. We just can’t finish it off. We’ve got to stop conceding sloppy goals as well, so we’re definitely causing our own problems at the moment.

“We’re out of the alliance cup now after three 1-0 defeats, but we could easily be looking at progression. The lads have actually played really well in all three games.

“We’ve lost them 1-0 when we’ve dominated, and that’s what I’m saying when I talk about how important it is for us to be scoring goals when we’re creating so many good chances. We should really be sitting here with three wins from the group games, but if you don’t score goals you don’t win games.”

Looking ahead to the Wednesday night trip to the Peninsula Stadium to face Salford City in the first round of this season’s FA Youth Cup, he said: “The second years will know what the FA Cup is all about, and I’ve always said it’s the closest game we get to being like a first team.

“We’ll prepare exactly like the first team would and go down on a coach. We’ll have a pre-match and then we’ll go and play on an EFL ground under the lights. It’s the best youth competition in the world and everybody is trying to recreate it, but they can’t because they haven’t got the pyramid system like English clubs have.

“It’s set out exactly like the FA Cup, with the same clubs and the same rounds, and it’s played around the same time. Everybody plays their strongest teams because it’s a prestigious competition to win.”

“Salford have obviously got a very famous group of players involved at the top levels of the club, and I think they were probably involved in winning this competition three times themselves.

“The owners of the club will see it as an important competition because they will have loved playing in it themselves. They’ve been decent in the league this season, so we know it will be a tough game.

“Their results so far show they will be a decent side, so we’ll have to go there and give it a go. If we take our chances they’ll have to play well to beat us.

“Our aim when I’ve been involved in the youth cup has always been to get to the third round, which is no different to the first team. We want to get that far and get ourselves to one of the Premier League stadiums.”