We caught up with Academy boss Eric Kinder to get his reaction to what was an amazing second half turnaround from his side when they came from two goals down to win the FA Youth Cup first round tie against Salford on Tuesday night. 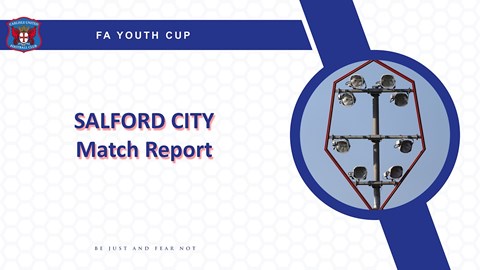 “In the first half we came out and tried to play football, but their press killed us and we had to bypass it," he said. "We couldn’t play out from the back, whether their press was too good for us or we weren’t good enough to do it, I don't know. It’s a one-off game, so it doesn’t matter how you win.

“Like I’ve said, these games are the nearest thing as a youth team player you have to a first team game in terms of how we prepared, so why not play football like you would in a first team! In the second half we had to go more direct, start winning second balls and play in their half.

"We were giving the ball away too cheaply in the first half, and we were lucky to go in only one goal down. When it went to 2-0 we did fear the worst, but we showed great character to go on and win it.

“We got sucked in to trying to play a nice passing style of football in the first half, which we aren’t ready for. They were always going to mix it, and we told them that before the game. We told them they had to do the basics right in the first 15 minutes, and for the first goal we didn’t do the basics well and we paid the price. Their second goal was scrappy, but the 40 minutes after that was outstanding from our lads."

“Once we got the first goal back it did completely change the game," he told us. "We started winning second balls and chasing things, tackling and competing. That was the game plan for the second half, we wanted to get the ball in their final third and see what came of it, and we got our rewards.

“I’ve been complaining in recent weeks about having quality around the box, but then not having anybody in there to score from them. We simply haven't been taking the chances we've created in recent games, but we put that right in this one.

"The deliveries from Charlie Birch and Taylor Charters are spot on nine times out of ten, and it was good to see us finish some of them off. We’ve scored two headers as well, which is unusual for us, but we thoroughly deserved the win because of the character we showed."

On the manner in which the equaliser was scored - a goal which completely tipped the balance in United's favour - he told us: “Lewis Bell’s goal was scrappy but they’re the best goals to score, because it means you’ve got bodies in the box.

"If we’d scored those types of goals in the last four weeks we would have had a lot more wins under our belt. To score from two crosses with headers, which we’ve not looked like doing at all, and then also get a scrappy goal in the most important game of the season so far is very pleasing."

“The lads will take confidence from this now," he commented. "I think the draw has already been made so we’ll face Bradford at Brunton Park in round two. It’s great that we’ve got a home game so we can play on our own pitch, but we’ll concentrate on the league game against Preston on Saturday for now.

“We’ve got a couple of battered bodies in there so we’ll have to see what sort of team we can put out on Saturday, but they all showed real character to get through the game. They were outstanding."

Speaking more about Saturday's home game against Preston, he said: “What I’ve found in the past with youth team players is that they don’t particularly need their feet put back on the ground after games like these because they just go on a roll.

"They’ll be looking forward to playing on Saturday now, and that game will take care of itself after the win tonight.”