United boss Steven Pressley spoke to us about the Leasing.com Trophy group game over League One side Blackpool shortly after full time on Tuesday night. 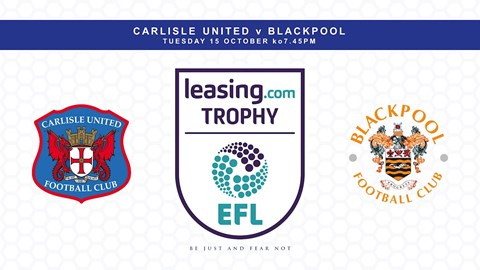 “I’m really proud of the performance,” he told us. “I said to the players after the game that for some of the group, if you consider where they were when we played Sunderland a couple of months ago to where we are now, it’s a great improvement.

“Also the performance of a number of our players who played on Saturday was really good. Our two wing backs were terrific again and it’s good to see the way the whole group applied themselves.”

“I keep saying that I know what I’ve got in the dressing room and that’s why I’m very comfortable just now,” he added. “So, I’m really pleased with the result and it was a fitting goal to win it.

“It was just a fantastic goal. In one or two moments Canice [Carroll] was a little bit untidy but I thought he gave probably his most assured performance since he came up here. He was tough, aggressive and his passing had purpose.

“His first pass for our first goal was superb and he had three or four of them throughout the night but, again, his finish was sensational. It was one of those ones you catch perfectly and it dips and moves and becomes really difficult for the keeper.

“He’s had to come through a difficult period and I had a really good conversation with him on Friday. Hopefully we’ll see more of this kind of thing from him.

“I had a conversation with Canice on Friday and I told him I wanted him to make his loan deal a success. Every player who has joined us, I want them to be a success because I’ve brought them in for a reason.

“I told Canice that he has to fight through difficult periods and handle them. He’s shown the right attitude and the right response to that and I’m really pleased with that.”

The scorer of the equaliser was Leicester loanee Ryan Loft who bagged his third goal for the club in time added on for the first half.

“For Lofty to score after he’d missed, and to go through again only minutes later and convert was really important,” he commented. “He was a little bit untidy in his play and I know he can be better than that. He knows that as well.

“The good thing for him is that he scored. That’s his third goal now for the club and that’s pleasing for him, because he’s had other loan spells where he hasn’t made an impact. The goals are good, but there are other parts of his game we’ll keep working on.”

The Blues had to come from behind on the night as Blackpool took the lead on 25 minutes when a driven shot from a tight angle somehow squirmed over the line.

“It was one of those horrible goals, but overall I thought we defended really well and we gave up very few chances,” he said. “The back three were excellent and the work ethic of the group was a real positive.

“Louis [Gray] will be disappointed but his handling was good after that. He’s another who is learning and he’s not had a lot of games. The important thing is that for a keeper, when you’ve made a mistake, it’s the reaction that matters. He responded very well and he showed good character.

“He wasn’t the only one and it’s good to see the hard work this group are doing bring them some reward. It’s important we have players who are knocking on my door and showing me they want to play.

“We have a group here where everybody has a contribution to make. It’s frustrating when you’re not in the team, but you’ve got to show me you should be playing, and many of them did that tonight.” 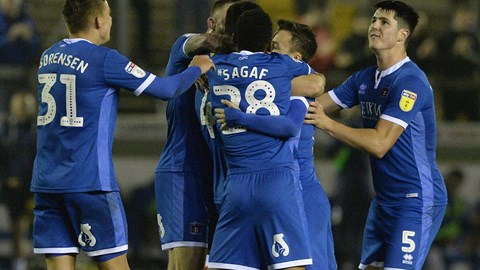 Two concerns to come out of the game were knocks picked up by winger Harry McKirdy and midfielder Jack Bridge.

“I’m hoping Bridgey [Jack Bridge] will be ok,” the manager said. “I think it was more a knee into the side of his knee, so I’m hoping there’s no serious injury.

“Harry [McKirdy] has got a problematic ankle which we think he’s gone over on. He’s a real doubt for the weekend at this stage.

“We’ve been fortunate so far in terms of injuries, but that comes from the way we work and the players’ fitness levels. It’s only really been Scougall who has missed any period of time, and tonight was two contact injuries, which is disappointing.

“Nat [Knight-Percival] and Hallam [Hope] didn’t train because they’ve both got little knocks, but we hope they’ll both join in on Thursday, and they should be fine for Saturday.”

And having already spoken about the need to have players knocking on his door, he told us: “I believe in this group one million percent because I know what’s in there. I know how tight we are and I know how much they give me.

“As an example, Bridge, Thomas and Sagaf all trained with the rest of the group in a very intense session this afternoon [Tuesday], but when called upon to play the game they still went out and put in their performances.

“I’m delighted for them because I know how much they deserve things, and we’ll keep working and working and I’m pretty sure things will turn.

“It’s the same for any manager, I want a situation where I’m having to make tough decisions in terms of team selection. That’s part and parcel of being at a successful club, when you’ve got a lot of people who want to be playing.

“We brought in quite a lot of development players over the summer that I’m seeing great improvements in, and now they’re pushing for places, which is encouraging.”

The victory means that United have left themselves with a good chance of progression, with an away trip to Morecambe to come next month as the round-robin of group fixtures draw to a close.

“I’ve made no secret that I want to use this tournament to bed in some of our younger players,” he explained. “I want to give them experience, but I also want to win the games.

“We’ve given ourselves a chance in the competition now and I want us to progress.”