Carlisle boss Steven Pressley spoke about the nervousness which can be felt on the pitch and in the stands this week when, as at the weekend, the team edges in front in what was always going to be a tight game. 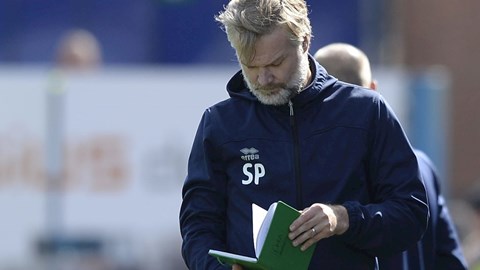 MANAGER: It's good to watch these players develop

“It’s a nervousness from the players and supporters because both want us to do really well,” he said. “That’s the natural thing. The players are working tirelessly, they have a really good spirit about them, as you saw at the end of the game with what it meant to them in the huddle.

“When everybody wants to do so well there does become a little bit of anxiety. Dealing with that only develops through time and through playing together for long periods. Many of our players haven’t experienced League Two football or the pressures of playing for this club and they’re growing into it. I’m seeing improvements in that.”

Speaking more about the post-match huddle, he commented: “I think there were some bad words used! The players were just pleased with how they rallied and showed a resilience. That was an important factor.

“We always set such high standards and the players expect those standards, they expect us to control the game with the ball, we didn’t do that but I think they were pleased with the way they ground out a really important result for us.

“When you look at it, we’re only four points off the play-offs, we’re still within touching distance, and I think we’re a team evolving. I think for us, we obviously want to play a certain way, but you have to win games of football to keep the journey going.

“I think that’s an important factor. Also, it’s not about systems at times, it’s how you perform within the system and I thought the back three performed really well. I think Gethin Jones had done terrific since he’s come in. He gives the speed down the sides and I was pleased with him.”

Taking his first look ahead to the weekend, he said: “They’ve got a very good manager, a set way they play and that’s a consideration for us.

“They’ve kicked on again and they’ve had a lot of stability at the club and they seem to be getting better season on season. It will be a really, really tough game for us but I think we’ve performed well away from home in recent games.

“At Bradford we lost but performed well, prior to that we won two in a row which was pleasing. We should go there with confidence.”

And the weekend could see a return to the match day 18 for midfielder Stefan Scougall following his spell on the sidelines with an ankle injury.

“He was in on Tuesday with Dolly and he’ll hopefully return to training with us on Thursday,” he confirmed. “His involvement might be there, maybe not from the start, but we’re certainly thinking about him in the group.

“He’s got so much energy, and of course Jack Bridge also comes back into the equation, which is pleasing. It’s always good to have a number of different options.”